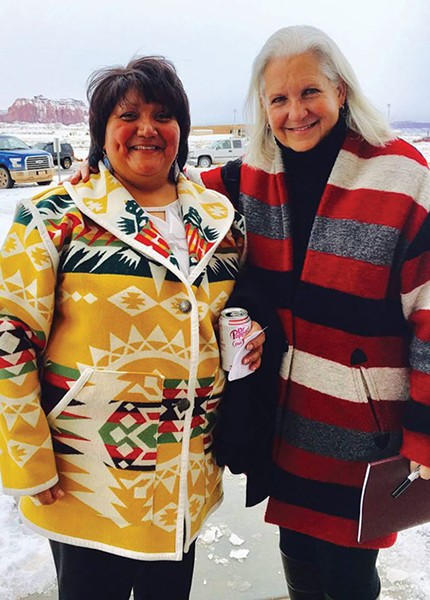 Readers and nature lovers alike should check out Torrey House Press, a local nonprofit publisher devoted to producing works on conservation. Founded by Kirsten Johanna Allen and Mark Bailey in 2010, the company is committed to sharing the stories that show humans' relationship with the natural world and the value of our interactions and interdependence with other living things on the planet.

"It boils down to people and passions," Allen says. "The people I work with—not just our staff, but the people we work with in the conservation industry, booksellers, and people in the publishing industry ... It's a gift to be working with them every day in varying capacities."

And all those people have one thing in common—"Passion ... regarding the wild and wondrous places around the world, and particularly in the West," Allen adds. Those who are interested in supporting Torrey House Press can purchase their books or make a tax-deductible donation through their website.

While there are other publishers focused on conservation, they usually approach the topic from a photographic or academic perspective. Torrey House Press is different. "We are looking at telling stories that have a wide appeal to the general reader," Allen says.

In addition to their titles—both fiction and nonfiction, with works for kids as well as adults—they're also interested in generating a dialogue about conservation and the West. The company is co-hosting a public dialogue event to discuss the newly designated Bears Ears National Monument on Thursday, Jan. 26 from 4-6 p.m. at the Gould Auditorium at the Marriott Library (295 S. 1500 East, 801-581-8558). The event includes both people who are in favor and opposed to President Obama's recent designation. For those who can't make that event, there will also be a panel discussion about the monument at Weller Book Works (607 Trolley Square, 801-328-2586) later in April.

Torrey House is working on promoting Edge of Morning: Native Voices Speak for Bears Ears, an anthology to be released this spring. "Edge of Morning is all Native voices," Allen says, and includes contributions from Faith Spotted Eagle—an Ihanktonwan Dakota elder who has been instrumental in the Standing Rock protest. Some of the Native writers make an appearance in Bluff, Utah, on March 3 and will visit Southern Utah University and Brigham Young University in October.

Allen is passionate about Edge of Morning and the effect it could have on the market. "I hope it will engage more of non-Native America with the different Native efforts to defend sacred landscapes," she says.

Ultimately, the effort strives to share how extraordinary some of the imperiled places in the West really are, especially in Utah. "Story matters," Allen says. "Right now, it's who shapes the narrative that will make all the difference for people, cultures, creatures, habitats ... about what we see on the ground and in our communities."