Working on the Railroad

One simple tune evolves into the tale of Chinese railroad workers in Gold Mountain. 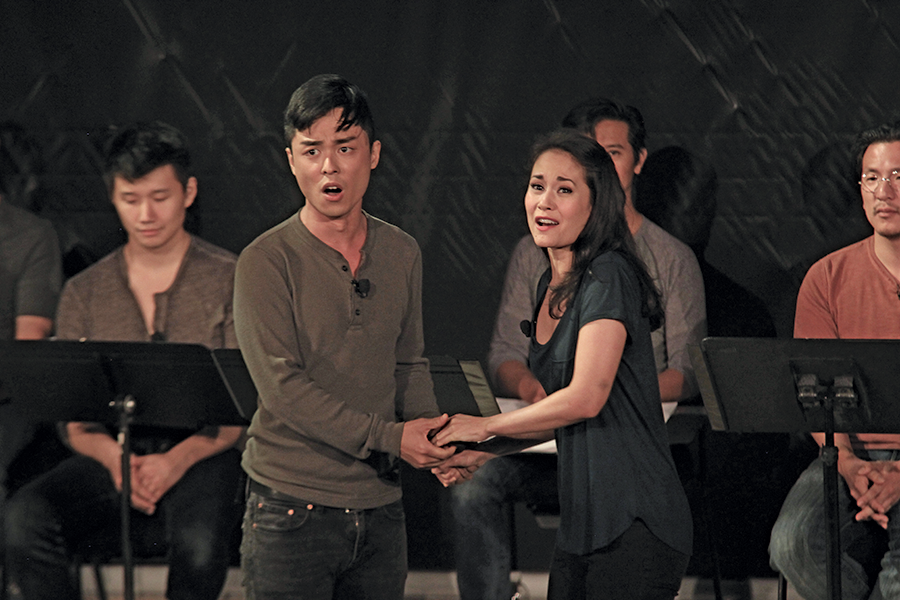 The story of Chinese immigrants building America's railroads offers complex material about assimilation, exploitation and the quest of America's newcomers to find a better life. You might expect that telling such a story would begin with a burning desire to explore this particular historical moment. For Jason Ma, it started with a tune.

Gold Mountain—Ma's musical production set during the construction of the Central Pacific Railroad in 1866, focusing on a romance between a railroad worker named Lit and a brothel worker named Mei—comes to Utah from New York, co-produced by Spike 150 as part of the sesquicentennial of the driving of the Golden Spike connecting the transcontinental railroad lines in Promontory, Utah. Yet it originated when Ma was working as an actor in a production of Miss Saigon, with a snippet of an original song that started to turn around in his head.

"I hadn't really been writing," Ma recalls. "But this interesting little lyric and melody fragment wouldn't really leave me alone. It seemed to be about California, the mountains, and how they don't look like the mountains back home in China. Basically, that weird manifestation of a song took me on a journey that summer."

What Ma didn't initially know, however, was who the characters in that song—which became Gold Mountain's "Your Eyes"—were, or what their story was. While he felt that they weren't in modern-day America, the rest wasn't clear until he started doing research into the Chinese railroad workers of the 1800s. "I don't remember this being taught in history class," Ma says. "I don't think I found out about this piece of history until after I graduated from college. So I made a couple of trips to the library, ... and found out about the Summit Tunnel, and how they drilled through during that winter. That was sort of the perfect two years during construction, and it seemed like the perfect place for these two people to express their agency."

Gold Mountain marks Ma's first full-length musical, but his experience as an actor told him how much stories like this one are needed. "As time passes, as an Asian-American performer, we come to realize that our opportunities have been quite limited," Ma says. "Especially in the musical theater canon, our representation is very limited. But one of the things that has started to happen is that people are writing their own stories. Instead of depending on Rodgers and Hammerstein or Miss Saigon to tell our stories for us, there's been this wave of Asian American writers who have decided it's time to take back our own narratives and maybe fill in some of the gaps in stories we've been telling over and over again.

"Also," he says with a laugh, "it's just easier as you get older to sit down and write rather than pounding the pavement going to auditions."

Part of what Ma realizes is that, as long as there are still relatively few stories focusing on the Asian American experience, there's a certain pressure placed on new stories when they do appear. He acknowledges that he felt that sense of responsibility in creating Gold Mountain, the same way other non-white actors sometimes feel pressure when creating roles that aren't written specifically about Asia or Asian American culture. "Every time we walk into an audition, you feel this pressure," Ma says: "If I screw this up, I screw it up for everyone. I read some of the press for Crazy Rich Asians, where every actor, everyone involved felt that pressure: If this tanks, it could be another 15 or 20 years before someone takes a chance on us again."

The audience response to New York performances of Gold Mountain suggests it's not only Asian Americans who find this tale satisfying. "Who doesn't like a good young love story—especially one with high stakes," Ma says. "This isn't two suburban kids falling in love in high school; it's two people coming from the worst economic devastation reaching out for a connection. So it becomes universal very quickly. If you write the right kind of characters, the rest is trappings."

That sense of universality, Ma believes, extends beyond the romantic story to Gold Mountain as just one representation of a broader immigrant experience in America. At a moment in the nation's history where immigrants are particularly scapegoated, there's value in understanding what motivates people to come here, often risking their lives in the process.

"What I love about the timing of Spike 150 and this musical is that we get to celebrate the fact that the country was built by immigrants in many different ways," Ma says. "This is just one way that immigrants participated in the literal building of our country. It was so dangerous, and many of them, if they didn't literally sacrifice their lives, they gave a lot for this to happen. People from distressed circumstances come here to survive, then somehow fold themselves into the fabric of the country. It's a cycle that happens over and over again. I wish we could just remember that."