A preview of several features from this year's Damn These Heels LGBTQ Film Festival. 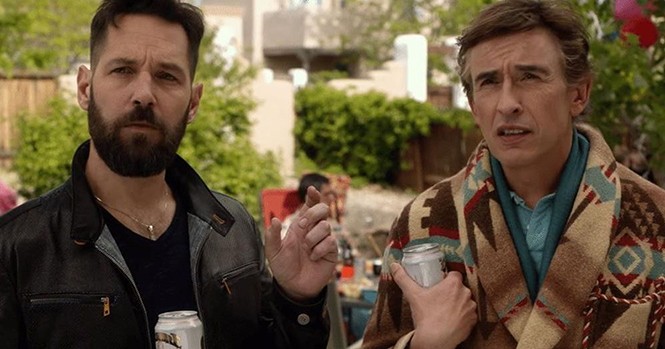 This weekend marks the Utah Film Center's annual Damn These Heels LGBTQ Film Festival. Here are capsule reviews of several of the feature films available for viewing ahead of the event.


1985: The words "gay" and "AIDS" aren't publicly spoken, but their significance hangs heavy over this restrained drama from writer/director Yen Tan. Adrian Lester (Cory Michael Smith), a 20-something man, travels from his new home in New York to his family home in Fort Worth, Texas, to spend Christmas 1985 with his conservative Christian parents (Michael Chiklis and Virginia Madsen) and younger brother, who don't know he's gay. As easy as it might have been to turn this into a melodrama full of shouting and recriminations, Tan opts for a kind of mournful silence through black-and-white cinematography and authentically awkward conversations. The tone and performances might have benefited from slightly more energy, but there's still so much that's communicated through one long two-shot of a father and son who barely know how to talk to one another. (Scott Renshaw)

Close-Knit: The narrative arc feels familiar, but writer/director Naoko Ogigami builds enough grace notes into it that the emotional connections come together. Rin Kakihara plays Tomo, an 11-year-old girl whose single mother takes off with a boyfriend, leaving Tomo to stay with her uncle Makio (Kenta Kiritani) and Makio's live-in girlfriend, a trans woman named Rinko (Tôma Ikuta). Ogigami makes Rinko a bit too much of a saintly character—she works as a hospice nurse on top of her surrogate mothering of Tomo—and there's not much doubt about where the specific turns of the story will lead. But individual character moments are gentle and heartfelt, as Ogigami explores a variety of different mother-child relationships and how those mothers live out their responsibilities. Tomo and Rinko communicating via cups and a string might be old-fashioned, but at least it's communicating. (SR)

The Gospel of Eureka: Surrounded by the Ozarks is Eureka Springs, Ark., a place with an unlikely thriving LGBTQ scene and an evangelical church community that, more shockingly, has made inroads with that queer community to fight bigotry and campaign against a local anti-trans "bathroom bill" up for a vote in 2017. Co-directors Donal Mosher and Michael Palmieri (October Country) detail the town's history and connections to the U.S. Evangelical movement, as well as to reactionary figures like Anita Bryant.However,thisis a joyfully vibrant affair (narrated by charismatic trans artist Justin Vivian Bond), juxtaposing a drag performer serving up church lady realness with congregants performing The Great Passion Play, recognizing the camp glory in both performances. For every shot of a loud anti-LBGTQ bigot, there enters a confrontational townsperson defending themselves, their brothers and their sisters. Eureka Springs might be a modest town, but it's a hotbed of love, warmth and care, whether in church pews or a gay bar. (Caden Mark Gardner)

Ideal Home: There's a minimum threshold of comedic enjoyment you're going to get out of anything starring Steve Coogan and Paul Rudd, but it's a shame they're propping up a plot that already seems quaint and dated. Coogan plays Erasmus Brumble, a cooking-and-lifestyle TV show host whose contentious relationship with his producer/boyfriend Paul (Rudd) is complicated by the arrival of the grandson (Jack Gore) Erasmus didn't know he had, in need of a home after his dad is jailed. Coogan's in his wheelhouse playing a self-absorbed minor celebrity, stealing a bit of the jokey thunder while Rudd plays a non-straight straight man amiably. But their relationship with their unexpected child too rarely feels like more than a setup for the well-intentioned notion that "see, gay parents can be good parents, too." The closing-credits shots of same-sex-parented families only emphasizes that this is a nice idea served in an easily digestible wrapper. (SR)

Leitis in Waiting: We go to the Republic of Tonga for a tropical doc that introduces us to Pacific Islanders who identify as transgender. Actually, the name for transgender women around these parts are leitis (as in "ladies"). While they have been mostly accepted in Tongan culture as servants of the royal family—they also have their own raucous beauty competition, known as the Miss Galaxy Pageant—they're also viewed by the general public as freaks and abominations. Directors Dean Hamer and Joe Wilson (along with producer Hinaleimoana Wong-Kalu, a Hawaiian trans woman who was the subject of her own documentary, Kumu Hina, in 2014) plant their always-sympathetic cameras in front of the resilient, optimistic trans women who keep their heads held high, even when so-called Christian holy men speak out against them, condemning their existence and leading the charge on getting others to do the same. (Craig D. Lindsey)

Man Made: This documentary gives us a glimpse of trans men who prepare to compete in Trans FitCon, an Atlanta-based, bodybuilding competition. I say "glimpse" because it's more about the struggles and hardships these guys have faced (and are still facing) as men who were once women. Director T. Cooper (also a trans man) focuses on a select few, including a Twin Cities rapper who gets a double mastectomy before the competition, a professional bodybuilder from Cleveland who trains for the con after a local bodybuilding competition bars him from competing and an Arizona fitness nut who is in the process of transitioning, something that could make him lose his lesbian girlfriend. While these subjects have harrowing, heartbreaking stories to tell, the individual journeys they take to show how much they've worked on being healthy and happy makes Man Made one hopeful, inspiring odyssey. (CDL)

The Misandrists: Director Bruce LaBruce immerses audiences in the world of the Female Liberation Army, a radical separatist lesbian group living in Ger(wo)many in the late 1990s. Their mission: to end the patriarchy. Their propaganda: lesbian porn. This darkly comedic film follows one member of the FLA as she helps an injured man take shelter in the basement of FLA headquarters, contravening a strict "No Men" policy—but hers isn't the only secret threatening to dismantle the FLA from the inside. As these women work together toward their common cause, they're forced to reckon with their own transphobia, their place within a capitalist society and the prejudices of their leadership. LaBruce instills sharp social commentary into this sexual romp, calling out the many and varied forms of violence against women and shining a light on gender absolutism and the danger of trans-exclusionary radical feminists. It is a must-see, especially for those seeking to dismantle systems of transmisogyny within the patriarchy. (Samantha Puc)

Mr. Gay Syria: Director Aye Toprak's documentary explores the unique dynamics of being gay in a repressive culture in a way that also underlines hard truths about the way we think of immigrants and refugees. The focus is on Husein Sabat, a Syrian refugee living in Istanbul, who becomes the expatriate representative in the Mr. Gay World pageant, partly to draw attention to the unique plight of gay Syrians. Toprak finds compelling material in Husein's double-life—remaining closeted to his parents, even being married with a young daughter—and the fear of violence that drove him from his home. We also see, through Husein and other secondary stories, the challenges of being unwanted anywhere, whether it's because of nationality or because of sexual orientation, as anxious nations refuse people entry or asylum. It's a narrative that puts a face on the way that going to a new country can be a matter of life or death. (SR)

Sisterhood: The Macau-Hong Kong drama from Tracy Choi follows a woman named Sei as she returns to her hometown—15 years after she left because of a massive falling-out with her best friend (and potential life partner) Ling—upon hearing that Ling has passed away. In the search for Ling's son, whom Sei helped raise when he was a baby, she's forced to confront memories of her past, the heartbreak she's been nursing and the fragile nature of her own decisions. Sisterhood is a heartbreaking story of platonic bonds, mutually repressed romantic feelings and the importance of found family. It is a movie about women, for women, especially those who are familiar with the deep and aching desire to be honest about their emotions but can't (or won't) for fear of damaging relationships. Bring tissues; you'll need them. (SP)

The Wild Boys (Les Garçons Sauvages): This visually lush feature debut from French director Bertrand Mandico recalls Kenneth Anger,Pink Narcissus, Cocteau and Guy Maddin in its high-culture meets low-culture, with cinematography oscillating between black-and-white and a drugged out rainbow palette.The story follows a group of five rebellious, sexually violent French schoolboys who go on formative cruise that brings them to a supernatural island, where a mysterious liquid causes bizarre things to befall this gang of five.Thisis a possible "your mileage may vary" situation, a pastiche that dips its toes in classical and transgressive sexual imagery while winking and provoking its audience. Some of it is in fact imagery that has been subverted and poked fun at before (and more originally) in previous queer films, but the brash petulance from Mandico and his androgynous cast—crucially, cisgender women playing these schoolboys—feels like a fun and fascinating reminder of queer cinema as enfant terrible.(CMG)