Behind the mic with the DJ/APD 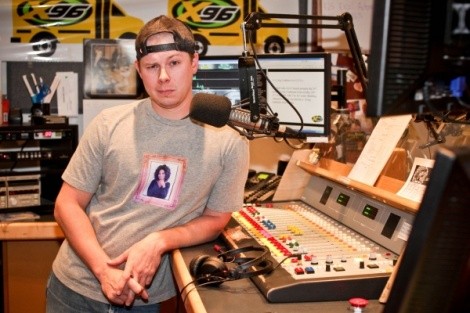 Corey O’Brien, X96’s assistant program director, is a radio celebrity and music connoisseur. At the ripe age of 31, O’Brien has been a part of Utah’s music industry for more than a decade. He has recently jumped on the local-music bandwagon, giving many bands airtime on X96’s Listen Local First, Thursdays at 9 p.m.

How did you get your job at X96?
1998 was the first year West Jordan High School decided to launch an internship program for seniors, and X96 was one of the three choices I put on my list and the one that called me back—thanks a lot, KUTV. Anyway, I was interning for Artie Fufkin, who was on the air but also moonlighting as the promotions director. X96 was the only station in the building, and it was a pretty amazing time to be in radio. There was much more goofing off than there is today and a lot more colorful language. After a couple months of filling out people’s Rolodexes and labeling commercial carts, I was passed on to Todd Nuke’Em to learn how being on air works. The day I graduated high school, they had me doing the midnight to 6 a.m., live, graveyard shift. I was pretty terrified. I remember even playing the wrong Beastie Boys song on my very first spin.

What is your official position or title with X96?
I am the APD/MD, which stands for assistant program director/music director. Meaning, I fight with the PD about what we play, schedule music every day and listen to music propaganda from the labels about how great their new band is. I also write, produce and voice commercials, as well as work with the promotions department to come up with fun ideas the audience would get a kick out of. Listeners are always top priority.

When did your love affair with music start?
Growing up, my parents were pretty big music collectors, and my pop used to sit my little brother and I down and play some really awful music on a regular basis. There were bands like The Georgia Satellites, Bryan Adams’ early stuff like “Cuts Like a Knife,” Kiss, Kansas, lots of Journey … some of Elton John’s work, the Beatles and some jazz. When I was about 13 or 14 is when I really got into music. I worked in the music department of Media Play all through high school. Working in a music store was an education in a lot more than music, though. That's a story for another time.

How did your love of local music come about?
I am just getting into the local music scene, so there’s a learning curve. Andy Pants covered it before me, and Portia Early before him. I deal with national acts at the station, but I really think it’s important for X96 to know and show what’s going on here. We all talked about bringing it back, but saying it is one thing and doing it is another. So I did, and look forward to growing with it. I see a podcast

possibly coming out of it in the future. I like King Niko and The Suicycles, but I am discovering new and talented musicians every day.

Have you ever gotten hit on while you were on the air?
Oh boy. This doesn’t happen nearly that much, but when I started working here I had no idea how to handle the attention. Not that it was a significant amount, but it was certainly more than my geeky ass was getting in high school. The one that stands out was when I was doing my 24-hour show to raise money for the Utah Food Bank, and this middle-age woman kept calling and calling, telling me about all the interesting things she wanted to do to me in her van with no windows. It’s not a good way of meeting women.