Xavier Lang and The Undie Run 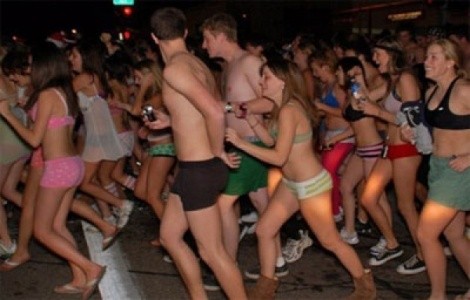 At the inaugural Undie Run, hosted by Utah Uncensored, let it all hang out ... er, in—but just barely. On Sunday, Sept. 19 at 9 a.m., people will strip off their clothes—down to their underwear, although no thongs or nudity are permitted—and run one-and-a-half miles along 300 West. The clothes that are shed will be donated to charity. It starts and ends at Trails Gentlemen’s Club Downtown and is free. Event coordinator and libido liberator Xavier Lang, 40, discusses everything underwear, except the cliched, “Boxers or briefs?”

You tried this last May at the U but it never happened?
This event is typically sponsored by colleges; UCLA, University of Texas and other big schools do it. There’s monitors to ensure people are dressed modestly ... well, as much as you can be in underwear.

We tried to get it on campus. Understandably, there’s rules and regulations, but there were so many hoops to jump through. At its basic level, it’s just a fundraiser. So, we’ve gone elsewhere. There’s still rules, like keeping it under 50 people—I think—or we’ll need permits. If there’s more, maybe we’ll have several runs throughout the day. If it’s successful, we’ll hope to step it up to a larger scale later.

Any reasons beyond charity?
Any time there’s extreme conservatism it demands the exact opposite. There are people here from other places that aren’t conservative. Utah Uncensored is an outlet. Still, for others, it’s outside the box, giving them an opportunity to be free. For colleges, it’s usually set-up as a break right before finals.

There’s a pre-run glam-up session?
People want to decorate their outfits, so we’re hosting it at the South Shore Sports Bar [2827 S. State, 801-484-6499, Saturday, Sept. 18, 8 p.m.]. We’re bringing lots of glue guns, sequins and other stuff and have some drinks. It really only depends on everybody’s creativity what they’ll come up with. One guy wants to get airbrushed; I’m curious how that turns out. Also, people can do it by walking, skateboarding, biking, whatever, and decorate those, too.

Sequins ... Mankinis ... Waxing ... Any other advice?
The only thing we don’t want is nudity, no teabags, thongs, that sort of thing. We want it fun but clean. The last thing we want is to get anyone in trouble.

After the run at 10 a.m., what do a bunch of barely-clothed people do?
Get in their car and go home. (laughs) We’re thinking about going to breakfast afterwards, but I’m sure IHOP doesn’t want a bunch of people coming in their underwear.