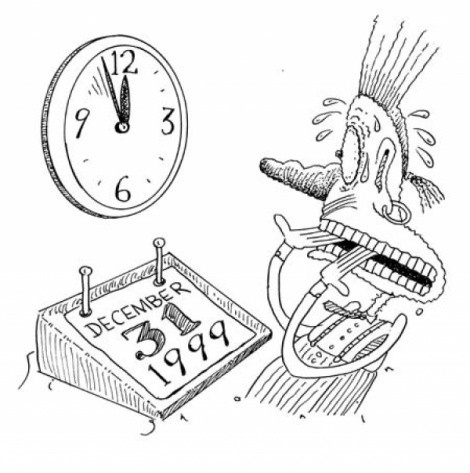 What’s the final word about Y2K? We were told this was a serious problem, and that huge dollars and man-hours were needed to head off trouble. Why didn’t the sky fall, as predicted? Were the dollars spent before Jan. 1, 2000, well-spent or not? The date change seemed seamless to a layman. Was this because we headed off most of the trouble before it happened, or because it wasn’t as serious as predicted? —Paul Wheeler

One may inquire: Why am I answering this now? Because the question keeps coming in, and at some point you have to ask, “If I don’t take it on, who will?” So, here’s the best answer you’re likely to get: 1. While the true extent of Y2K issues will never be known, what we do know suggests the problem was wildly exaggerated. In retrospect, it would have been smarter to focus resources on a few truly high-risk areas, wait till Jan. 1, 2000, for everything else, and fix what broke. Looked at in that light, the money spent on remediation, estimated at between $100 billion and $600 billion, was mostly wasted. 2. That’s hindsight talking. To put things in perspective (I realize the argument cuts both ways), many now say the world as we know it is going to end due to global warming. You think the smart choice is to say: relax?

Y2K fears arose because of the old programming practice of truncating dates to save memory: 1964 = 64. As century’s end approached, people realized computers wouldn’t be able to distinguish 2000 from 1900. Programs that depended on date at some critical branching of the decision tree would behave oddly; some might just stop. Nightmare scenarios abounded: aircraft falling out of the sky, nuclear reactors melting down, bank accounts wiped out. Crash Y2K fix-it projects were undertaken around the world, but many fretted they were too little, too late. On New Year’s Eve 1999, millions stared at their TVs as midnight approached in the easternmost time zones, waiting for the worst.

Nothing much happened. Y2K postmortems fell into two categories. Early ones often took a self-congratulatory tone: Due to our heroic efforts, civilization was saved! Later analyses tended to the opposite view: Y2K panic was a gross overreaction to a minor problem. The latter line of thought is more easily defended. A few observations:

Some problems did surface. In February 2000, the Senate Special Committee on Y2K listed more than 50 incidents in the U.S. and more than 100 elsewhere, all minor. Probably the scariest news was an alert that three Russian Scud missiles had been launched. Turns out this wasn’t a Y2K bug, just another day in the Chechnya conflict. I don’t claim the things that went wrong were inconsequential: In the U.K., for example, a medical software application gave incorrect Down syndrome-test results. But, software bugs show up all the time, and none has yet brought civilization to its knees.

The Y2K-was-real crowd explained the quiet millennial dawn by saying the developed countries that depended most on computers marshaled the most resources and fixed the problems. Less-developed countries didn’t do as much but used fewer computers, so less could go wrong. That’s not a credible argument. Italy had plenty of computers, but its Y2K effort lagged; despite this, its problems were no worse than elsewhere.

Great anxiety was expressed about the millions of individuals and enterprises relying on personal computers, but few problems turned up. Two things may account for this. First, PCs are replaced frequently, and Microsoft software was largely Y2K-compliant by 1997. Y2K audits of PCs typically found few problems in machines dating from 1997 on. Conceivably those few might have included some critical applications, except for the second factor, which I offer in all seriousness: Windows is so notoriously unreliable that no one would ever build a life-ordeath system around it.Another concern was the embedded microchips built into cars, medical devices, etc. Of the 7-to 25 billion such chips worldwide, initial estimates suggested 2 to 3 percent might fail. By late 1999, the risk had been downgraded to 0.001 percent, and even that was likely high. A review of commercial aircraft found no essential systems were date-sensitive.

Still, while all this is obvious now, it wasn’t obvious at the start. Some contend much Y2K expenditure was simply an effort to fend off litigation. That may be true, but so what? Would you want to be the bean counter whose attempts to economize let the nuclear missiles accidentally launch?

You can make the argument that after a year or so of intensive work—by late 1998, say—it should have been clear that the worst fears were unjustified and that remediation could be throttled back. But it was only money, a lot of the systems and software were due for revamp anyway, and really, who knew? Are your insurance premiums wasted if your house doesn’t burn down?