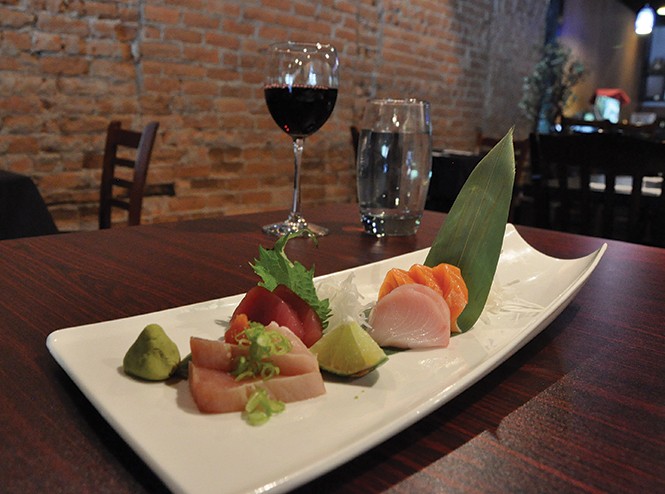 Long gone are the days when the downtown Mikado Japanese restaurant was about the only place to find sushi in the Salt Lake Valley. There are now dozens of eateries specializing in sushi and sashimi, including some really good ones; you'll even find pre-made or produced-on-the-spot sushi in many local supermarkets. The sushi wars are on.

Years ago, before Takashi Gibo opened his eponymous restaurant, Takashi, my favorite sushi and sashimi spot was Shogun. Gibo worked there—it's where I first met him—along with other talented chefs, including Chef Masatu. Today, Masatu still makes sushi in the space that once was Shogun, but it underwent renovation and reopened as Yellowtail Japanese Bistro a few months ago. My, how that space has changed!

Walking into Yellowtail Bistro for the first time, I could barely recall what Shogun had looked like. I remember it was dark, with tatami rooms near the front of the eatery and a sushi bar in back. At Yellowtail, the space—which was long and narrow—has been opened up and looks a lot larger than the old Shogun. There are well-spaced tables now near the entrance, a gorgeous sushi bar that's nearly the length of the restaurant on the right, and more private dining behind the bar. Attractive wood floors, contemporary design features, and beautiful lighting have turned the once somewhat sad-looking spot into a very eye-catching dining destination.

When we first visited Yellowtail, the menu was nothing short of overwhelming. There were some 50-plus different "specials," side dishes, combination dinners and a la carte options, plus another 30 or so sushi rolls and more than 20 nigiri choices. Since the place wasn't exactly crowded, I wondered how it could have enough product turnover to assure a constant supply of fresh fish, and how so many menu choices possibly could be of consistently high quality. Well, the menu has since been pared down some, and it still seems to be a work in progress. There are hits and misses.

An order of kushi shrimp was disappointing ($6.50). It was a small plate of skewered-and-grilled medium-size shrimp, lacking in much flavor, and overcooked. A much better starter would be delicate yellowtail slices (also called amberjack) with a sauce combining Peruvian ahi amarillo peppers and aojiso, a fragrant Asian herb similar to shiso ($13). Or, try the lightly seared tuna tataki ($13) with zippy black-pepper sauce and garlic chips.

A happy, unexpected discovery at Yellowtail was the wine list—an item often largely overlooked in sushi restaurants. Sure, there's the fairly standard beer and sake selection (Kirin, Sapporo, Asahi, Momokawa, Hiro, etc.), but I was surprised to find that the smallish wine selection consisted of three French sparkling wines; whites and Rosés from France and Italy; and red wines as varied as Cahors, Primitivo and Rioja from France, Italy and Spain, respectively. A bottle of La Chapelle de la Bastide Picpoul de Pinet 2013 ($36) from France's Languedoc region is a versatile white wine and a good match for many Yellowtail dishes.

Whereas a standard order of nigiri at most sushi bars is two pieces, Yellowtail offers its nigiri a la carte, with most selections priced at $3. Uni (sea urchin) and toro (tuna belly) are higher, priced at $4 and $5 each. I recommend the hotate; I've discovered I like raw scallops even better than cooked. And especially delicious are the hama toro (yellowtail belly), maguro (tuna) and tai (snapper) nigiri, all served in generous portions over good quality sushi rice with the standard accompaniments (ginger, wasabi and soy).

Where the "bistro" part of Yellowtail Japanese Bistro seems to come into play is with some of its not-so-standard sushi and sashimi specials. For example, I've come to love the ankimo (monkfish liver) served at Takashi; it tastes like foie gras. But Yellowtail actually serves foie gras sashimi ($12/two pieces) with balsamic vinegar and yuzu "Jell-O." You can imagine the party on the palate as silky, sensuous foie gras partners with tangy balsamic and citrusy yuzu. There is also a special of lightly grilled toro aburi (fatty tuna) served with fresh (hon) wasabi and sweet tamari ($12/two pieces).

Of course, there's the predictable gaggle of sushi rolls—Firecracker, California, Spicy Tuna, Dragon and such—at Yellowtail, but nothing particularly notable. We did enjoy the Oiran roll ($13.75), where spicy tuna and avocado were rolled in rice and topped with raw salmon, mango, yuzu, tobiko and eel sauce.

While the Yellowtail lunch menu offers mostly sushi rolls priced the same as during dinner service, there are some bargains to be had elsewhere on the midday menu. For example, four pieces of tuna sashimi is only $5. There's also a combo lunch platter ($10) with tempura shrimp and veggies, miso soup, rice, salad and a choice of teriyaki chicken, barbecue beef, tonkatsu (deep-fried pork cutlets) or teriyaki salmon. Even better bargains are the lunchtime sushi/sashimi platters which include miso and salad or rice, plus either 10 pieces of sashimi; 12 sushi roll pieces (four each from three different rolls); or 10 pieces of nigiri (all are chef's choice).

There's no shortage of sushi in Salt Lake. But if you're looking for solid sushi and sashimi, combined with an appealing contemporary ambiance and friendly service, give Yellowtail Japanese Bistro a try.