You Can Smell 'Em

Tommy Stinson chooses intimacy with his new duo, Cowboys in the Campfire. 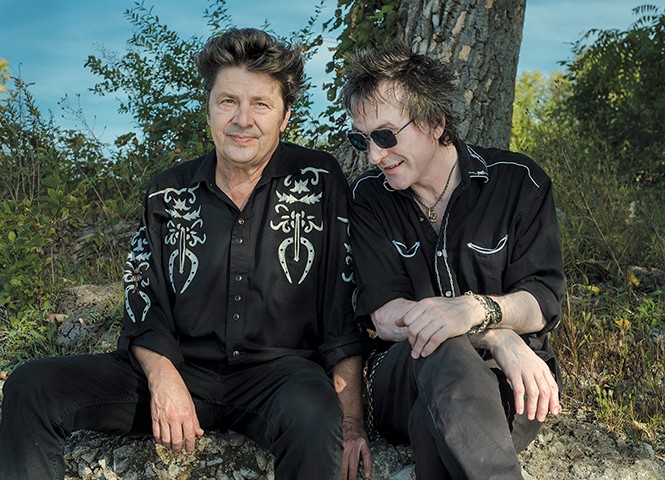 One of the many cool things about The Heavy Metal Shop is it's not all brutality and volume. It celebrates rock 'n' roll in all its forms. Owner Kevin Kirk books punk bands (Dwarves) and singer-songwriters (Michael Dean Damron) for in-store performances. He's also a Cheap Trick fanatic, so it's a given that he'd dig legendary punk/power-pop band The Replacements. Consequently, it makes perfect sense that he'd book Cowboys in the Campfire, a duo featuring the 'Mats—and longtime Guns N' Roses—bass player Tommy Stinson.

But Kirk isn't the captain behind this booking; Stinson says the HMS simply fit their gig. "We're playin' some pretty wacky places, since we've been doin' this thing," Stinson says from his home in Hudson, N.Y. He means backyards, boxing gyms, breweries, private homes, studios, salons and other record stores where he and Chip Roberts are performing on their fall tour. "It's just the two of us, you know?" he continues. Playing these venues makes more sense than performing in clubs, where overhead eats into profit.

Stinson's no stranger to starting small and working his way up. The Replacements played their share of dinky, dirty dives en route to becoming one of the most adored—and criminally under-successful—bands in history. When the 'Mats broke up, he started over with the bands Bash & Pop and Perfect. While they never matched his first band's profile, critics had nice things to say about the music. And he eventually wound up playing bass in a little band called Guns N' Roses—a gig that lasted 17 years.

That's the kind of gig many musicians wanna land: The one that lasts forever. But there's a certain romance to starting over, too; rekindling old flames, discovering ones that burn even brighter or just looking for new creative tinder. During and since Guns, Stinson has released solo albums, restarted Bash & Pop and sustained a three-year reunion with The Replacements. He's even busked for charity.

It's all good to Stinson, who says he's never had an idea how his music career would play out. "I didn't really think about that too much," he says. When The Replacements started playing clubs on the Minneapolis scene, quickly building their devout following, it felt enough like a rock 'n' roll fantasy to him. "Whatever that dream would've been, it was already sorta happening," he says. "And I was so young; I really didn't know shit from Shinola at that age, you know, about what kind of lifestyle a fuckin' rock star would have."

The realistic aspiration is, of course, sustained employment as a musician. In that sense, Stinson's certainly experienced the dream, making a living while enjoying variety in his projects. He's played punk, power pop, alternative rock, hard rock and country. He's performed alone on tiny stages and with megastars in major arenas. "I try to keep it interesting," he says, "'cause I can get bored pretty easily doin' any one thing for so long."

His long tenure with Guns N' Roses worked out because the band did shorter tours and "I had the flexibility to be able to do that kind of thing." When Stinson left the band in 2016, it freed him up even more. Since The Replacements reunion fell apart in 2015, he restarted Bash & Pop and also reached out to Roberts, aka "Uncle Chip."

Stinson's uncle by a former marriage, Roberts is a frequent writing partner, having contributed to the new Bash & Pop album, Anything Could Happen (Fat Possum). "We've been good buddies for 10 years now—or more," Stinson says. "We just have a good time playin' together." Since neither of them had any summer plans, they launched the country-tinged Cowboys in the Campfire, which they'd been discussing for years. They toured for the first time last spring, playing a mixture of new material and selections from Stinson's solo and Bash & Pop catalog.

"I've done the solo thing before," Stinson says. "That's got its limitations, obviously, just bein' alone." With Roberts, "it's fun to have someone else to bounce stuff offa."

It's a fruitful partnership. Stinson and Roberts have generated enough tunes to make a record soon. The sets on their fall tour still draw from the same sources while featuring even more new material. What won't they play? "There won't be Replacements or Guns songs in the set, just so you know," he says, laughing heartily.

Reminding people of his marquee credits isn't what Stinson seeks with Cowboys in the Campfire. The project is about enjoying the one-on-one interplay of a duo in smaller venues that facilitate audience interaction. "When you're playing arenas and festivals, there's barriers, you're kinda far from [the crowd]," he says. "I've always found that a little bit disconcerting." He prefers the intimacy afforded by communing with fans in close quarters, "where you're right there next to 'em and you can kinda smell 'em."

City Weekly sends its heartfelt condolences to Kevin and Angie Kirk, who lost their son Joey unexpectedly earlier this month.