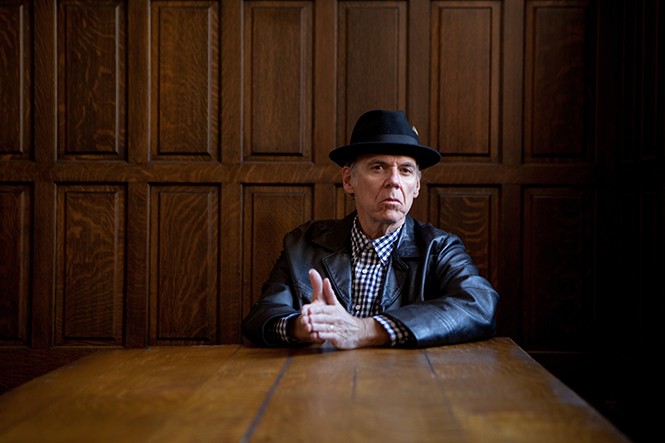 If I'd heard John Hiatt's Slow Turning when it came out in 1988, I'm not sure I'd still be a fan. Sure, you get your driver's license at 16, but most teenage boys aren't ready to explore much of the emotional territory this album covers. It's an album about growing up, written by a man who's lived hard and might've died if he hadn't changed. I was just getting started.

Luckily, I didn't hear Hiatt's music until I was 21—biologically, chronologically and legally an adult, but with miles to go en route to maturity. In the film Benny & Joon (1993), the tender ballad "Have a Little Faith in Me" plays when Johnny Depp and Mary Stuart Masterson first kiss. The song gave me chills. But upon leaving the theater, I promptly forgot about the song by who I thought was an old black dude with an amazing voice.

Two years later, I finally picked up Hiatt's Bring the Family (A&M, 1987). His sobriety album (alluded to in the songs and by the back-cover photo of him sipping coffee) runs the emotional gamut. The first side alone hits invigorating escapism ("Memphis in the Meantime"), raw lust ("Alone in the Dark," famous for soundtracking Jamie Lee Curtis' bump-and-grind in True Lies), manic love ("Thing Called Love")—all perfectly relatable to a baby adult. It then veers abruptly into a stark rumination on being a habitual heartbreaker ("Lipstick Sunset") before swerving in the other direction, pledging to be the light in someone's darkness ("Have a Little Faith in Me"). It was deeper, taller and older than me—but the tears in my eyes meant I was catching up.

I resolved to buy everything Hiatt had ever put out. I started with his two most recent releases, Perfectly Good Guitar (1993) and the live Hiatt Comes Alive at Budokan (1994). The next one I brought home was Slow Turning.

I'd read online that it and Family are regarded as Hiatt's breakthrough albums, and that they established him as an artist and performer in his own right. Until then, he'd been a critically acclaimed "songwriter's songwriter," with people like Bob Dylan, Steve Earle and Iggy Pop covering his work. By then, I was five years older, married and a father, with experience in some of the emotional trials that Hiatt sang about. I was ready. At least I felt that way.

I came to know Slow Turning as a collection of stunning tunes populated with perfectly drawn characters acting out stories that must've been pretty rough for their author. You see, at the time, I'd bought into the John Hiatt mythology. It goes like this: A young kid from Indiana hits the road, finds a $25-a-day job writing songs in Nashville, earns a reputation as a songwriting savant, begins making his own records, parties too hard, gets sober, rallies to do some of his best work, and ultimately becomes an internationally respected artist. Every one of his songs, I and many other fans surmised, had to be personal.

Ten or 12 years ago, in an interview, Hiatt set me straight. He said that, while his songs might start out autobiographical, he fictionalizes them. That way, he can keep some things to himself while also making the songs relatable for others.

That blew my mind; I thought I'd had it all figured out. In the ensuing years, I listened to Hiatt with new ears. I took his songs as he intended them to be taken. I empathized or sympathized accordingly with him and his characters. And I explored my reactions to the songs, gleaning some self-knowledge in the process.

Today, I know Slow Turning as a collection of scenes that reflect on personal growth, and how decisions alter the arc of our lives. Some songs are escape fantasies ("Trudy and Dave," "Tennessee Plates"). Others extol the virtues of living in the moment ("Drive South") or where you could wind up if you live idly ("Ride Along"). Still others explore loneliness ("Icy Blue Heart," "Is Anybody There?"), dread the encroaching past ("It'll Come to You") and reckon with character flaws ("Paper Thin"). But it's the title track that sums everything up.

"Slow Turning" is about seeking and achieving perspective. We're born knowing nothing, then we vacillate between thinking we know everything and realizing we don't know shit, before finally accepting that life is constant learning. As Hiatt sings so ebulliently, "It's been a slow turnin'/ from the inside out/ a slow turnin', baby/ but you come about."

To mark their 30th anniversaries, Bring the Family and Slow Turning are being reissued on vinyl (A&M/UMe). Not only that, but Hiatt has re-formed The Goners, the band that backed him up on the latter platter, and they're going on tour to play the entire album from front-to-back. I expect that watching the man perform his magnum opus, peppering the set with stories, will evolve my relationship to Slow Turning even further. And I welcome it.