SLC's YYBS live up to name on new EP 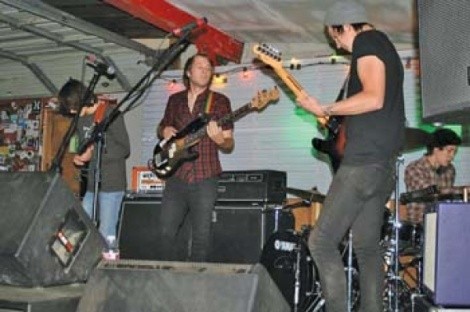 With a name like Young Yet Brilliant Sleuths (YYBS), it would seem that they could easily get to the bottom of a lineup that works. Elementary, my dear Watson? Not quite.

After a number of years on the Salt Lake scene, the four-piece has finally landed on a roster of musicians that has proven to be, well, brilliant. The approach to their distinct brand of indie rock is not built on pre-existent elementary pathways within the genre, but rather on original compositions and material that inspires emotion in the listener.

This notion is insightful for four boys barely emerging from their teen years. They manage to avoid indie-rock clamor and achieve a unique sound and identifiable lyrics for a visceral auditory experience.

The band has been together for over three years, but the members have changed as if they were playing musical chairs. Now, however, longtime member Tres Wilson (rhythm guitar and vocals) thinks they have have found a synergy with the current four. “It’s almost a different band as what YYBS has been in the past, but I think this EP is the definition of YYBS.” he says.

Wilson was backed by Taylor Clark (drums), Sean Smith (bass) and Craig Murray (lead guitar) in the studio over the past few months as the band recorded their self-titled EP. But everything didn’t fall into place until just now. “It took us a while, mainly because we hit coordination bumps,” Wilson says. “It’s been finished for a while, but we didn’t have time for a CD release show.”

The four-song EP was recorded at Midnight Record Studio with sound engineer and producer Cal Cruz, who has a good feel for the new lineup. “They have a really good sense of melody,” he says. “I think their songs have enough diversity that they carry. They create songs that will last. The four-song EP is very concise, lyrical and imaginative.”

Quality over quantity, as the adage goes. The band could have put more songs on the EP, but they preferred not to dilute the potency. Plus, the songs wouldn’t have meshed well, Wilson says. All the members agree with Murray when he says, “You don’t want an album full of filler songs.”

YYBS understands the importance of the creative process, and they didn’t go into the studio with any preconceptions of how they wanted their EP or the songs on it to be—instead, they just naturally let them develop.

“You have to be faithful to where the song is going and let it manifest itself,” Smith says.

While they may be young, their lyrics reveal a poetic depth of experience. Wilson’s words create an easy rapport; he is honest about his past experiences, but it’s in a way that is easy to internalize, and can be felt in myriad ways.

For instance, take an excerpt from “Persian Skin,” a standout track. “I’ve been collecting your bobby pins/ I guess to substantiate my foolishness/ The shadows on my chin and upper lip/ Seem to be stemming from my inner pessimist.”

The cover of the EP is representative of YYBS’s sound—young, energetic and free. It’s a freehand drawing by friend and artist Adrianna Myer. Murray interprets the artwork to be almost like a “Where’s Waldo? picture, but without Waldo.”

Myer packaged the CD, YYBS burned it “and sealed it with love,” Murray says, adding, in jest, that they were also environmental and animal stewards during the production process. “No elephants were harmed in its making.”