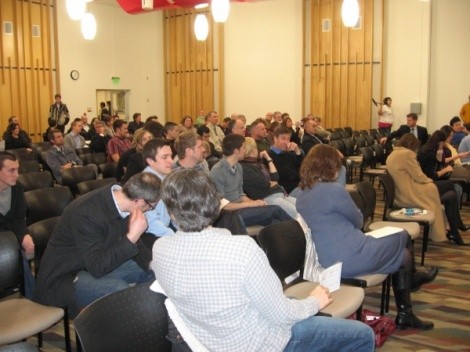 Tempers were absent or cooled Thursday night at the LGBT Community Forum organized to discuss the recent grand compromise between legislative Republicans and the political leaders of the gay community.

Rep. Christine Johnson, D-Salt Lake City, said last night the compromise is only that "both sides will stand down." That is, Republicans won't run any bills this session to reduce rights and privileges of queer Utahns, so long as the gay rights leaders refrain from running any bills to extend them. Critics have said the gay rights leaders squandered momentum that's been building for years, while supporters say Republican appetite for anti-gay bills this year was too great to ignore.

Expectations were high in many camps that Thursday's forum would be acrimonious after a series of angry Facebook exchanges between members of the gay rights movement. Charles Lynn Frost, who co-wrote and starred in the award-winning The Passion of Sister Dottie S. Dixon, published a screed in the Salt Lake Tribune in which he said the compromise is the "facile, less clash-oriented road" that was inappropriate because "with our current legislators (Democrat and Republican) [gay rights activists] will always be on the defense." Former state Sen. Scott McCoy, who remains an active advisor to Equality Utah, the gay rights lobby, criticized Frost's editorial via his own Facebook page, after which many responded by venting frustration or supporting the one-year stalemate.

But activists in the community known more for noisy protest than subtle negotiation were mostly quiet last night. Jacob Whipple, who organized the 2008 post-Prop 8 Temple Square protest, merely urged the community to find other ways to stay involved in the political process during the in which gay rights issues will not be addressed. KRCL producer,Sister Dottie co-writer and protest organizer Troy Williams only asked how best to persuade the "movable middle" on gay rights issues. Frost was absent, or kept a low profile. Others who had complained on McCoy's Facebook page were also absent.

Equality Utah's former lobbyist Will Carlson was a notable exception. Expressing love for Johnson, McCoy, and Equality Utah, he nevertheless said he felt "betrayed by this agreement" and "ignored." He urged Johnson to break the moratorium and reintroduce the Common Ground Initiative bills because dialog resulting from controversy at the legislature is the gay rights movement's most valuable tool.

Johnson responded that the risk was too high.

"The [Republican] votes are there, the appetite is there, to push not just preemption, but the Natural Family Resolution," she said.

Preemption refers to Salt Lake city and county non-discrimination ordinances passed in recent months with support from the Church of Jesus Christ of Latter-day Saints. Gay rights leaders have worried the Legislature would move to "preempt" or negate those ordinances with a state law. Sen. Wayne Niederhauser, R-Sandy, was considering sponsoring the Natural Family Resolution (pdf), Johnson said, a Sutherland Institute initiative to which would limit the rights of gay families.

Preemption would not only eliminate the Salt Lake ordinances, but also preclude any other cities' efforts to pass similar resolutions. Ogden, Park City and Taylorsville, among others, are said to be considering such ordinances. Carlson said earlier that preemption of the municipal ordinances would only serve to convince the federal Democrats for the need of a federal Employment Non-Discrimination Act.

Two protest/rallies were also announced last night, one by Eric Ethington that is scheduled for today. Read more about that here. Another event March 20 was also mentioned.

While Carlson wasn't the only one to speak critically of the moratorium, those statements were far outnumbered by calls to stay united, or as one man put it, quoting Sinead O'Connor, "Fight the real enemy," that being state Senate President Michael Waddoups and the Republicans.

You can read my live Tweets from the forum. Just click the pretty blue button: