Going back into the world of comics today, we focus our attention on the works of an artist who practiced his craft and got into drawing issues the hard way. But man, did it pay off. 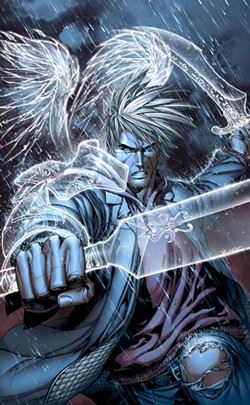 --- Tyler Kirkham has been producing all kinds of work for Top Cow for the past few years, having a hand in titles from Image such as Strykeforce, Broken Trinity and The Tenth. Now producing workds primarly for Marvel such as Fusion and Ultimate Fantastic Four, his dedication has earned himself a following and opened up new doors for projects yet to be seen. I got a chance to chat with Tyler about his work and time at Top Cow, as well as projects coming down the road and his thoughts on comics in general.

Gavin: Hey Tyler! First off, tell us a little bit about yourself.

Gavin: How did you first get interested in comics, and what were some of your favorite titles growing up?

Tyler: My older brother read Spider-Man comics when we were growing up. That's how I was first introduced to comics. I used to look at his, and I think he had some other books. I immediately loved Wolverine and the X-Men, he was and still is my favorite. I used to create my own characters that had claws. I just thought he was so cool. I also loved the X-Men cartoon. Been hooked since. 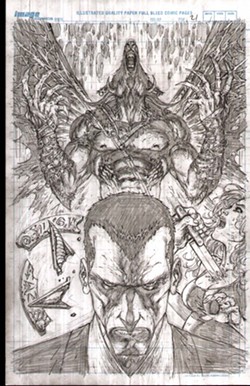 Gavin: Unlike a lot of artists, you went through no formal or college training prior to working on titles. What was it like for you learning to do most everything by trial and error?

Tyler: Yeah I guess that was good and bad for me. On one hand Its cool because like you say I learned by trial and error and was forced to figure things out, on the other hand I didn't have knowledge on some very important things like composition and perspective. I mainly learned by studying other artists and looking at real life. I'm always observing my environment.

Gavin: Would you get frustrated sending out samples and not getting a reply, or did that just you more determined?

Tyler: Not really, because when I sent stuff out I was so young I was still in high school. I remember taking submissions to a convention when I was like 14 or something and showing Jim Lee. I knew I wasn't ready but I wanted to know what to work on. 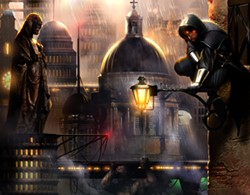 Gavin: How did the opportunity come about to work at Image Comics?

Tyler: I got really lucky I think. I started going to more conventions and really trying to pursue comics. I had a really cool art teacher in high school. He let us do what we wanted. So and few friends and I worked on our own comics. So what happened is I had a friend on a church mission in California. He was living in a house with another guy that also liked art and comics. I would send my friend my art and he would show people. The other guy that lived in the house said, "I know where a comic studio is that's real close." He took my art to the Top Cow offices. He showed one of the editors there. She saw promise in my art, but I still wasn't ready. Now I had an in though. I would always do new work and show this editor, or if I went to a convention I would talk to her. So what happened is she was working with a the writer of The Gift. He was looking for a young artist. I wasn't ready to work at Top Cow yet, but this was something good for me to wet my feet and grow as an artist.

Gavin: What was your time like working on The Gift, and what was the reaction you saw come from it once it was published?

Tyler: It was amazing to be drawing and getting paid for it. The only other paying art work I had done was for a local newspaper. Raven, the creator of The Gift, is a great guy. I had a blast. I was learning lots of things because I had an editor as well helping me correct things that were off. 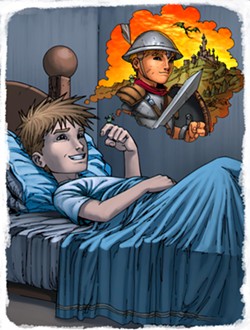 Gavin: What eventually led to you moving to Los Angeles and officially working for Top Cow Productions?

Tyler: So I had worked on The Gift for about six issues and Renae the editor thought I was ready to come intern at Top Cow. She invited me out for a couple weeks to work in the studio and show Marc Silvestri my work. He also saw promise in me and said if I could move to L.A. I would work there. I still had The Gift so it worked out well until I could get a Top Cow book. I got married and moved to L.A.

Gavin: What was it like for you working with that array of talent and learning from each other's work?

Tyler: It was the best learning experience i could have possibly done. I mean I had Marc Silvestri sitting cross the room from me. The other guys were great too. I was always trying to keep up so it made me try harder. I really enjoyed my time there.

Gavin: What were some of the titles you worked on while a part of Top Cow?

Tyler: My first book was Legacy Of Kane, a video game. Then I got Strykeforce after doing a Styker pinup that Marc liked. Then some Tomb Raider, The Darkness Superman crossover, Vice, The Darkness, The Tenth, Broken Trinity.

Gavin: Why did you decide to move back to Utah after all your time there?

Tyler: Mainly to be close to family. I had a little brother that I really missed and wanted to see him grow up. I missed my friends as well, I also really wanted to buy a house. L.A. was to expensive.

Gavin: After your time with Image and Top Cow, how did you end up getting to work for Marvel?

Tyler: Actually Top Cow and Marvel had teamed up, They had me do some Marvel books. I was still a Top Cow employee though.

Gavin: You've worked on several titles so far. Ultimatum, Spider-Man, Fantastic 4, Fusion, Phoenix Warsong to name a few. What's been your favorite title so far from their catalog, and why?

Tyler: I really enjoyed The New Avengers/Transformers crossover and Fusion. I just really enjoy the crossover books, because you get to draw so many characters. I also had a lot of fun on Ultimate Fantastic Four.

Gavin: Aside the work in comics, you've done a lot of artwork for some side projects like novels and video games. How were you approached to do that kind of work, and what are some of the things people can see your artwork in?

Tyler: I've only done one or two small video game concept projects. I've also done a couple novel covers for books that were self published a couple are As Magic Shifts, and The Witches Pupil. As well as kinda being an art director for a local book publishing company. I've done a few odd jobs here and there. Almost graphic design work. Designing Magazine, billboards and business cards to creating art for movie pitches, as well as other commission work. I wrote and drew my own children's book My Best Friend's Booger. Talking to a publisher about it right now. You can see some of this stuff on my site as well as Overcast Studios.

Gavin: I've read you're working on your own original material right now. Without giving away grand ideas, what are some of the things you're currently trying to develop?

Tyler: There's something very big I can't announce yet in the comic forecast. You will hear about it soon I'm sure. As far as my own projects. I have the children's book as well and a graphic novel, I've created with some friends called The Monarchy, I've been developing a story with Top Cow called Downfall. I'm not sure what will come of that. I was working on a fiction book with some other friends called The Guardianship Saga. Its on stand still right now. Not sure what the fate of that is either. We wrote about 100 or so pages, and had a lot of artwork done. I guess Not all your ideas can make it. Its very hard working on a book with five creators. We all work or have school or kids. No free time to work on books.

Gavin: Going local for a moment, what is your take on the current local comic scene and the books coming out of it?

Tyler: Actually there is a lot of talent in Utah. I get together with some of the guys for comic signings sometimes. We also did a cancer fund raiser benefit for a local writer Jake Black. A few of us were on “Good Things Utah”.

Gavin: Who are some local artists and writers should people check out?

Tyler: I'm really good friends with Mandy McMurray, She has done stuff for DC and Aspen, as well as her own stuff. She is also the writer and co-creator on The Monarchy. Also Ryan Ottley and Chad Hardin are some good ones. 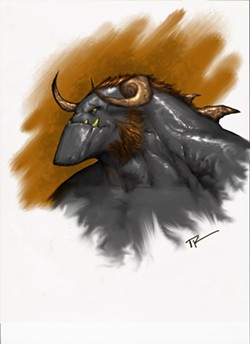 Gavin: Going national, what's your take on the comic book industry as it stands right now?

Tyler: I like the comic scene right now. I really love what Marvel and DC are doing as well at Top Cow. I love seeing all the films coming from comics. I think its great for comics. There are a lot of great stories and creators in comics and I think its smart for Hollywood to notice and take advantage of all the talent.

Gavin: What would you say are some of the best series in print right now?

Gavin: What are your thoughts on online publishing and how some books are now going strictly to an internet format?

Tyler: Not really sure on that, I know I don't read comics online. Maybe if I had an iPhone I would, but there is nothing like holding the comic and opening it up whatever spot you want at any time. I hope there is always comics in print. Even if they are all online.

Gavin: Where do you see the state of comics over the next couple of years?

Tyler: I see it staying the same, I see allot more comic movies coming out, I see allot of comic writers doing more Hollywood stuff, and artists continuing to get better.

Tyler: I'm working on a comic called Mysterious Ways right now. It was created by a big name video game guy. Jason Rubin. Its a Top Cow six issue series. Look for it this summer, Look for Mysterious Ways comic online. Also go to my website for all my updates and news, as well as art for sale and art galleries. I'm always adding new art. I'm also on Facebook, and also check out Overcast Studios.