While it may not look it outside at the moment (even with Daylight Savings kicking in yesterday), spring is just around the corner for the city. People may still be in the hills taking advantage of the snow before it goes, but a good portion of them are looking forward to cruising around the city on their boards and bikes when the sun finally comes out.

--- Supplying many of those boarders will be F1ND, the California transplanted skateboard and accessory company that's been going strong for the past five years. Bringing on an array of artists to create unique designs to all their products, the company caught the eye of many a local riders and grinders alike and have become boards of choice for many a Utah pro. Company founder David Born took the time to chat about his time boarding, starting up F1ND, thoughts on skateboarding and a few other topics. 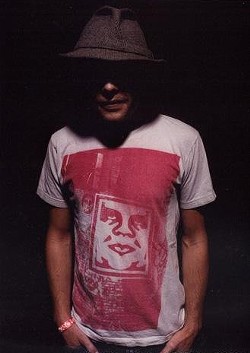 Gavin: Hey David. First thing, tell us a bit about yourself.

David: I guess I'm like an onion. I might have some deep philosophical layers and some soft squishy ones, but the front is that I'm some creative jerk chasing after life with my heavy right foot on the gas.

Gavin: How did you first take an interest in skateboarding?

David: It was at a Circle K in Long Beach in 1984, and I think countless Slurpees were involved. Life was a lot simpler back then, wasn't it? But when I got older I got into longboarding. There's nothing like going 30mph down a hill with nothing between you and the road except for last week's raspberry.

Gavin: What was it like for you first learning to board and hitting up skate parks?

David: I was never the big trickster, it was more a mode of transportation for me growing up. Back then, we'd skate the schools and mall parking lot. Skating wasn't hip or mainstream, it was a bunch of punk kids ditching the security guards and getting into trouble all day. I don't even remember having official skate parks like they have now in almost every city.

Gavin: When did the idea come about for you to start designing boards?

David: Being an artist all my life, it was just a matter of time before I ran out of canvas or paper and grabbed the nearest piece of anything in the garage to paint on. So this little piece of Canadian Maple quickly became a weapon of mass distribution.

Gavin: Did you experiment around at first or was it more planned out? And how did some of those early attempts come out?

David: It was a very collaborative effort, carefully planning our marketing strategies and catalog. We dug deep in our lint-filled pockets and put our goals on the table, and just like every small business we are feeling both the stresses and joys of having our future in our hands.

Gavin: How did you start going about selling them, and what was the public reaction from people when they started seeing your work?

David: We threw the first designs on a flyer and went to the skate shop to try and sell them. The kids hanging out in the shop demanded them, and they were hanging on the walls a few weeks later. Too many bigshot companies slap their logo on a deck an call it a day. We wanted functional art, and we're hoping our customers will too. 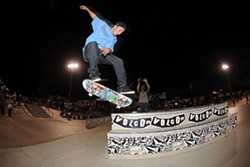 Gavin: What made you decide to start your own company? And how did you come up with the name "F1ND"?

David: F1ND began in 2005 as an art/fashion/music zine in Los Angeles. From-One-Indie artist to another, it was an avenue for others to showcase their talent. I'm not just racing my own little go-kart of creativity through this life, I'm driving a bus full of gypsies and giving tickets to anyone else passionate about doing great things with their talent.

Gavin: These days, what's the process like for you in creating one from concept to final product?

David: I woke up about 3AM from a crazy dream, scribbled some jargon on a napkin, then spilled chocolate milk on it and saw Madonna's face in the stain. Then some ninjas show up to escort it to the warehouse. We call the tree farm in Vancouver and order some fresh Maple, stick a log in one side of this big machine, press the green button, and skate decks start flowing like the salmon of Capistrano out the other side.

Gavin: How did the decision come about to hire on artists, and who are some of the people you've worked with in creating boards?

David: This dates back to 2000, when I co-founded Curious Culture. We built an online community of artists around the globe, and have held onto many of those relationships over the years. All of the F1ND artists are a vital part to our family and organization, and we are hoping to continue helping new and emerging artists to have a voice on our wooden canvas.

Gavin: Who are some of the skaters you currently have on the Team, and how can someone join?

David: The only one we can brag about is American Fork's Brodie Penrod. He took 1st in Volcom's Wild in the Parks series last year riding F1ND, we're pretty stoked. Most other kids asking for sponsorship just want free decks. The ones that we do sponsor are out there showing it off, being creative, and chasing their dream of being PRO one day. The rest of the countless emails and applications go into a special folder we call Junk mail.

Gavin: Down the road I see you'll start selling t-shirts. What's the plan you have in mind for Skate Couture?

David: Skate Couture is all about limited edition artist-made apparel, but we're taking it slow and trying to keep it authentic. How many people really wear a t-shirt just for the logo, anyway? Not all skaters these days are rockin' raggy flannels and jeans, some of us appreciate a clean pair of kicks and freshly pressed button-up shirt.

Gavin: Do you have any plans right now to expand F1ND at the moment or sticking to business as usual for now?

David: We're trying to expand and get the word out to shops nationwide, and thinking about the next ASR show. The internet has been a great tool for us so far. I have no idea how all these kids are finding us, but they are. I guess I'd have to thank Google for that? And this article.

Gavin: A little state-wide, what's your opinion on the way skateboarding is handled by the city and state?

David: No complaints, I've worked with Sandy and South Jordan Parks & Rec departments so far, and everyone has been very kind. It's almost like the DMV here, but there's something wrong about not having to take half the day to renew a tag. Utah's government must have a great HR department or something.

Gavin: Is there anything you wish you could change or wish were better around town?

David: The weather. We sort of shut down for a few months out of the year, which can't be good for business. Nobody's skating the frozen parks. But I've been here three years now, after growing up in southern California. I can't complain about the traffic, but what's with the big lake that everyone is afraid of? It's nice once you get a few feet off shore, I think this summer I'm getting a paddle board and going to find out what's on the other side.

Gavin: What's your take, both good and bad, on the way "extreme sports" are presented nowadays with the X-Games and time on ESPN?

David: Last year was our first Dew Tour, and it was awesome! I was painting and giving out skateboards, chillin' with local pros like Adam Dyet, watching eight year-olds tear up the arena, you can't beat it. Of course there's the whole mainsteam MTV glamour behind the extreme sports being debatable, but I think it just gives more skaters the chance to be creative and skate outside the box.

Gavin: Being a local business, what's it like for you interacting and selling product through local retailers?

David: Utah has a great sense of B2B community with groups like Local First, Utah's Own, etc... I like walking into our local skate shops, every one of them is ran by awesome people. And they're usually a sort of hang out, so it's cool to meet young kids and give out stickers and feel all famous and old and stuff.

Gavin: What can we expect from both you and F1ND throughout the rest of the year?

David: Originality, determination, and an insane Summer catalog with new artists. And we hope to get in on a bunch of local competitions and events in collaboration with shops like Lenitech, Uprok & Cottonwood Boardshop.

David: The Daybreak Artwalk in South Jordan, March 27th. This is our 2nd annual charity event I've helped organize with other local artists. This year we have a huge indoor/outdoor space with live music, a kids art fair, all kinds of cool stuff. Nothing like the Southvalley has really had before. We're even doing this International ArtShare program for local students, it's total greater-good type stuff, that everyone should be a part of!  Also, catch me at The Hotel and Club Elevate for Evenings Live Friday nights. Some of the best DJ action in town is downstairs, while killer local bands jam upstairs, and us crazy artists doing live painting on the balcony. It's a pretty awesome event for SLC to have, but is still a hidden gem it seems. People need to come check this place out!