The JCRD’s two newly-christened home teams, the Hilltop Aces and the Railway Banditas (both of which rotate members throughout the season), seemed evenly matched for about two jams--then, it became readily apparent that the Aces had drawn the more skilled set of skaters. Strong jammers Colonel Skirts, Wee Smasha, Slick Tease and even the towering Everest Queen laid waste to the Banditas’ weak (and at some points, almost non-existent) defense and quickly racked up what would become an insurmountable lead.

Score at the half: Hilltop Aces 73, Railway Banditas 29.

In the second half, the Aces didn’t let up on their scoring tear, but Banditas jammers Harry Slaughter, Sarin Gasp and the returning Zelda Cruz worked harder and faster to close the gap. But with an eroding-by-the-minute defensive front, the Banditas couldn’t contain the Aces’ point-piling jams.

All four local leagues’ schedules can be found at Utah Roller Derby: 2010 Preview in the Sports Blog. 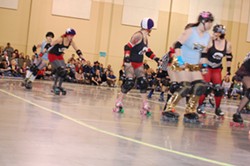