4/20 polls-America is changing its mind on marijuana

It's really important not to put too much stock in any one poll. As scientifically rigorous as polls can be, one's poll results still depend greatly on how you word the question, and marijuana legalization is no exception. ---On this 4/20, the international holiday to celebrate cannabis, let's take a look at how Americans are feeling about the United States' 76-year-old federal prohibition on one of the country's biggest cash crops.

Let's start first with this AP/CNBC poll newly released today. Respondents were asked, "Do you favor, oppose or neither favor nor oppose the complete legalization of the use of marijuana for any purpose?"If you're like me, the first thing you'll note is that 33 to 55 looks very lopsided and maybe all this hype about Americans supporting marijuana legalization is just that--hype.

Now let's tap Gallup for some historical context on that number 44. Gallup has a lovely graph which tracks their marijuana polls for nearly 40 years! Their most recent poll is from October 2009. Though their question was slightly different than AP/CNBC, they came up with the same 44 percent in favor of marijuana legalization.

Note, obviously, the trend line is coming down. Do you think that trend will abate, especially when young people are those skewing the poll results in favor of legalization?

Now let's check in with President Obama, who on the campaign trail made noise about reining in federal law enforcement when it comes to prosecuting medical marijuana users in states where it's legal. That promise hasn't been kept entirely.

In a Zogby poll sponsored by NORML, voters were asked: "During the presidential campaign, Barack Obama said he would stop federal raids against medical marijuana providers in the 13 states where medical marijuana has become legal. Should President Obama keep his word to end such raids?" (All links to NORML today redirect you to nothing more than a T-shirt shop where you can pay them money and learn nothing. In protest, I'm using their graphic and referring to their polls, but refusing to link to their site). 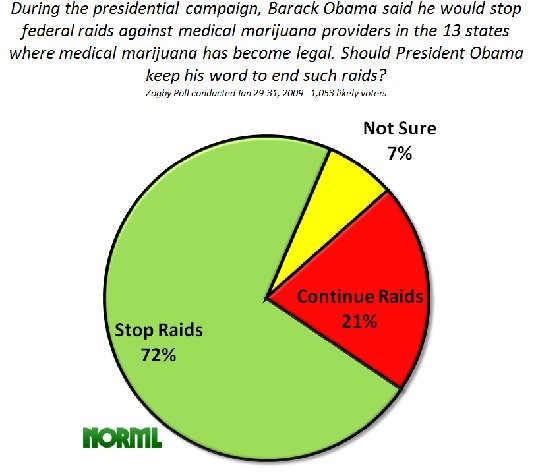 And then there's the real kicker: almost one year ago today, a majority of Americans agreed on poll language that supports legal marijuana, as if to say, "Well, when you put it that way."

Below is the results to a May 2009 Zogby poll which asked,"Scarce law enforcement and prison resources, a desire to neutralize drug cartels and the need for new sources of revenue have resurrected the topic of legalizing marijuana. Proponents say it makes sense to tax and regulate the drug while opponents say that legalization would lead marijuana users to use other illegal drugs. Would you favor or oppose the government's effort to legalize marijuana?" A majority said: Make it legal.

Remember, like I said before, public opinion polls are scientific-ish but writing a question that really gauges public opinion is art, not science. So, you judge for yourself what all this data mean. If you want some stoner fodder, ask yourself this big question: "What is public opinion anyway man?"

But looking at the Zogby polls, it's clear that you've still really gotta prime the pump--by reminding people of cartels and the cost of prohibition--to get a majority of Americans to support legal marijuana. But it's also clear that something, my friend, is blowing in the wind. Below is a map of states that have have legalized medical marijuana or greatly reduced criminal penalties for its possession.

Light green is medical cannabis states. Medium green is decriminalized states. Dark green are states that have done both.

Here in Utah we have but one legislator willing to admit she supports medical marijuana, but it's clear that lawmakers in other states are more emboldened. Now if that's not proof that Americans' attitudes toward marijuana are changing, I don't know what is.

If you read just one other thing about marijuana today, make it this:Why is marijuana illegal?