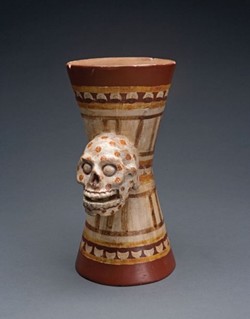 The new trio of shows opening Thursday at the Utah Museum of Fine Arts bring together an intriguing contemporary Mexican artist, the works of local school kids and more than 3,500 years of Mexican art from the biggest collection in North America.---

The centerpiece of UMFA's new shows is Las Artes de Mexico, a traveling exhibit from the Gilcrease Museum in Tulsa, Okla., which UMFA curator Jilly Dawsey called "one of the most amazing collections of Mexican art in North America."

Having gotten a peak at the show Thursday morning, it's hard to argue that point. The show ranges from utilitarian objects dating back 3,500 years—drums, hair bands, jewelry—to watercolors and oil paintings by Diego Rivera.

This 1957 piece, Building in the Desert, is one of two Rivera works in the show: 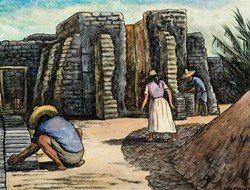 The Las Artes de Mexico show is set up both chronologically and thematically. The first objects you see upon entry are generally the oldest. As you move through, you encounter a room of religious-themed works, some of the most vibrant, colorful paintings, retablos and sculptures of the entire show. And as you get into the more contemporary works toward the end of your stroll, like Rivera's works, you start to recognize some styles that are prominent in contemporary art beyond the borders of Mexico.

"One thing the show really [presents] is the way the history of Mexico is crucial to the history of the U.S.," Dawsey said, especially in the countries' artistic traditions.

Concern that the Las Artes de Mexico show might lead some to believe Mexican contemporary art ended in 1960, or was only created by men (there's only one woman artist represented in the show, although some of the oldest objects were most certainly made by women), UMFA is launching its Salt series of shows with an installation by Mexican contemporary artist Adriana Lara, who works with found objects and "samples" prominent artists to create new works.

One example is a banana peel on the floor, meant to evoke all manner of thoughts in the viewer as they come across it in the gallery. A fun fact: The museum has the first guard who shows up in the morning eat a banana and leave the peel in teh assigned spot. So, if you go to the show and see this, don't pick it up:

Along with Las Artes de Mexico and the Salt exhibits, UMFA is opening the Community: Eat, Work, Play show, full of works by kids at Lincoln Elementary that were inspired by the Mexican muralist movement. And the museum continues its show of Pablo O'Higgins: Works on Paper, documenting some of the works of the white native Salt Laker who became a hugely popular muralist in Mexico a half-century ago.

Las Artes de Mexico will be on display until Sept. 26, as will Salt 1: Adriana Lara. Community: Eat, Work, Play will be up until early next year, and the Pablo O'Higgins (including the piece below) show remains up until Sept. 19.