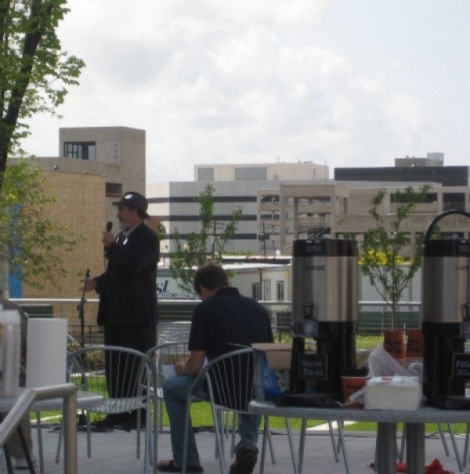 Instead of revolution, the Coffee Party is serving a hot mug of heady debate.---

Saturday morning, about two dozen people gathered on the plaza of the Bennett Federal Building for what was billed as a rally. In reality, it was a polite gathering of like-minded philosophers who spent much of the two hours standing in the sun in small groups debating health care reform, economic policy and banking regulation.

And, of course, most of them sipped on cups of coffee.

The Coffee Party of Utah is part of a national Coffee Party movement that is, in a lot of ways, a direct response to the much larger and more vocal Tea Party. Organizer Kelli Lundberg (who will be featured in the upcoming "Five Spot," online Monday and on the street May 27) said that their group is for the many Utahns who prefer civilized debate to the rancorous partisan bickering that currently dominates politics.

"We are kind of a reaction to the Tea Party. We don't think they represent mainstream America."

Indeed, Saturday's rally seemed more welcoming to different viewpoints than a typical political rally. Speakers took turns at a microphone, usually addressing only a few people, while the small groups sprung up at different places on the plaza. Instead of sound bites and slogans, the conversations were patiently philosophical, earnest without being overbearing.

Jenny Pathak, an organizer for a group in Sugarhouse, said that the group's civil approach to politics may not make headlines, but it does have fans. "Shouting makes news. We need to be persistent. We're small but we're growing."

The Coffee Party encourages its organizers to keep group to eight or less people to facilitate conversation. For information about joining or starting a group, visit the Coffee Party website.