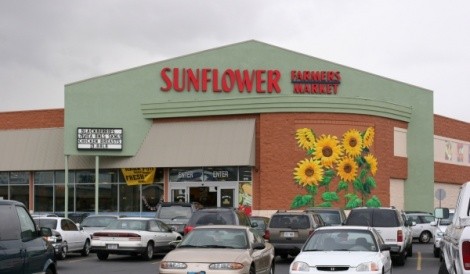 Soon after Whole Foods finishes their new Trolley Square superstore, near-east-side Salt Lakers will have another "greener" grocery chain to patronize: Sunflower Farmers Market confirmed with me today that they will move into Big Lots store on 700 East 200 South.---

What is Sunflower? you may ask. From their Web site, "...founded in 2002, [Sunflower] is a pioneer in developing the emerging value segment of the natural and organic foods retailing industry" (italics mine). Value, in business speak, means cheap. It's not locally-owned, as some seem to think (go to Cali's Natural Foods for that), as Sunflower operates 29 locations throughout the Rocky Mountain West and Texas (including in Murray and Orem, Utah).

For some back story, Sunflower is a venture of Mike Gilliland. He co-founded Wild Oats and acted as CEO there for a long time. You probably recall--what?--maybe 2 years ago when all the Wild Oatses in town switched to Whole Foods... Yeah, Whole Foods bought them out. Now Gilliland heads this new organic grocery brand and competes with Whole Foods again, and from the rumors I've heard, several "greener" grocery shoppers will be happy to have a Whole Foods-alternative close by.

The first negative that comes up when discussing Whole Foods--beyond the cost--is their dismal reputation in regards to its workers and organized labor in particular. Don't let all those "organic" and "I'm a Local" mushy liberal labels overwhelm you: wholly deserved or not, Whole Foods is criticized by its former employees and labor organizers for being cold, calculating capitalists trying to fatten the bottom line at all costs. A neighbor who just quit work at the Whole Foods Store on 400 South--worked their for years and didn't get a thank you on her way out--was thrilled when I told her rumors were that Sunflower would be bringing organic grocery competition to our 'hood.

But it's not a rumor any longer. According to a company representative, the Big Lots will close down about mid-October and Sunflower plans to open in February/March of 2011. This new location isn't on their website yet; you heard it here first.

How is Sunflower in regards to workers/organized labor? I, frankly, haven't any idea. Educate us all in comments if you have something to add on that. Additionally, don't be confused: "farmers market" is just marketing. Sunflower is a grocery store through and through. My thoughts on Sunflower come from one trip I made to the Murray store. I couldn't find one--not one--locally-grown tomato. Not that Whole Foods does much better in that category (at Whole Foods, my "local" tomato a week ago was from California and my "local" bread apparently comes from Colorado).

On the other hand, the last time I was at Cali's, I didn't see any produce that wasn't local.

(Thanks to reader @derk_niblick for the news tip).