While a lot of the companies who create different forms of entertainment hire their own staffers to be principal artists and designers, the freelance base is often tapped to breathe new life into ideas that may have already run their course. The amount of illustrators in Utah doing work for national companies might surprise you as some of the most popular work these days are derived from concepts and drawings within out own art scene, from artists you see on a near weekly basis in galleries and collectives. Like the guy we're chatting with today.

--- Geoff Shupe has been a fixture of Captain Captain Studios for a couple years now, hammering out his own models and sketches for gaming companies and comics, while also serving as a go-to man for several tech design firms for his 3D images. Not to mention having the distinction of being a selected artist for the Draw Nights at NoBrow Coffee every Tuesday. Today we chat about his career and his work, thoughts on local art and freelancing, and a few other topics as you check out his work throughout.

Gavin: Hey Geoff! First thing, tell us a bit about yourself.

Geoff: Hey man. I do freelance concept design for video games and comic books. I'm just a guy trying to make my twelve year old self proud and keep the family fed.

Gavin: What first got you interested in drawing and illustration, and what were some of your early inspirations?

Geoff: Same old story, I was totally into video games and comics as a kid. But I think the difference was that the games and stories were always secondary to the art. Most people want to get into the industry because they want to play games all day. I’d always have my friends play the games for me so that I could check out the details, like a particular gun or bad guy.

Gavin: You got your BFA in Painting & Drawing from the U back in 2008. What made you choose the U, and what was the program like for you up there?

Geoff: Heh, actually I tried to get into BYU's animation and illustration programs first. They've got a lot of industry recognition down there. But I didn't get in and I couldn't afford to go to a specialty art-school like Cal Arts or Savannah, so I figured I'd just head up to the U. Once I was there I realized that Painting & Drawing would be best for me because it’s the skill-set everything else needs. But the program up there is very contemporary fine-art oriented, so after the first year everybody is concerned with "style" and attitude more so than traditional skills. It got harder and harder for me up there because I was always aiming for production quality renderings of something versus having some artsy message behind what I was doing. A lot of the professors poo-pooed that and gave me a lot of crap, and I had to largely teach myself the things I knew would be necessary.

Gavin: Over the years you've done mostly freelance work, how did that come about and what did it entail?

Geoff: Well, I don’t mean for this to become a U slam session, but I guess success is all about over coming challenges right? When I first got out of school I looked to get on with a game studio, but the common reaction I got was "We don’t hire from the U because they don’t know how to draw." I had been right about the skillset that was being neglected in school, but there I was, and still far from where I needed to be. So in the meantime I took any small project from photography to animation to illustration and it started to snowball after a few years as my portfolio grew. I got in contact with people in the industry who were kind enough to mentor me to keep working on my skills and it’s just grown from there. I guess you could say that I built it out of the failure to do things the way I initially wanted to do them.

Gavin: You also spent time working for Envision Design. What experience did you gain from them?

Geoff: Envision was a small company with their hands in a lot of things and really excited about growing. So I got to wear a lot of different hats and see things from a business building perspective. It’s definitely a must for any artist to be involved with the unglamorous business mechanics like negotiating price-points and contracts. That experience was probably the most beneficial in terms of nuts and bolts.

Gavin: What made you decide to move into Captain Captain Studios? And how has it been for you working in that environment?

Geoff: I had a friend, Berk Frei, who already had space there, and we collaborated on a big project that came up. And then when it was finished I just kept working there. It’s been awesome to associate with the diversity of artists down there and see a bit more of the SLC art scene from the inside. 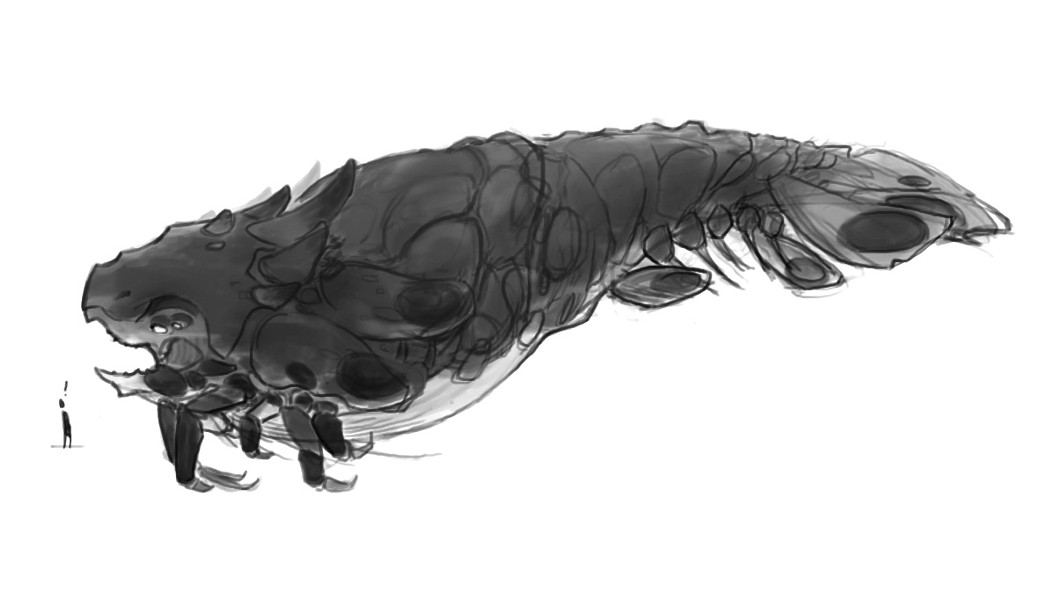 Gavin: How did the idea come about for you to start up Iron Brass Studios? And how was it for you building your own contacts?

Geoff: Some big opportunities came up, so Berk and I realized that if we wanted to continue to field that caliber of work we'd have to play the part. Having an official name and all it seemed to make a big difference in the eyes of clients. So far most contacts have been through other contacts, I can’t stress networking and marketing yourself enough.

Gavin: What's the process like for you in creating a piece from the idea to the final product?

Geoff: I almost always try to set an external goal, whither it’s for a client’s validation or just to exercise some personal technique. I almost always have a pretty good idea in mind of what I want to accomplish before hand. The challenge then is to figure out how to get there. Along the way I try to incite "happy accidents" to be a catalyst for inspiration but I also invite a lot of outside critique that helps push me to the next level.

Gavin: Considering the different types of work you create, do you prefer working in 2D or 3D?

Geoff: Well, they each have their own strengths and weaknesses. I’m predominately digital in both 2D and 3D, but I sketchbook a lot to initially work things out. In regards to traditional mediums, digital is just another tool of the trade. I know that rubs technophobes the wrong way, but I wouldn’t say that one medium replaces the other. It’s not like oil replaces watercolors, or ink replaces pencils, they are just mediums with their own uses. Pragmatically I just try to use whatever fits the project best.

Gavin: Who are some of the people you've done work for since starting up, and how is it for you working freelance?

Geoff: I've done work for Idaho Technology Inc, Perspectix, Privateer Press, all sorts. Freelance is tough in that it's fairly unreliable income, when it rains it pours, and sometimes there's nothing going on. But it's really nice to be able to make your own hours and work on a diverse variety of jobs.

Gavin: When the final design is out, what's it like for you hearing people's reactions to your work?

Geoff: Of course hearing compliments is great, but negative comments are more useful. You can’t really take feedback like a personal judgment and feel bad about it or get a big head. Sure, I’d rather hear something good because then I know I’m done with the piece, but when you hear something bad you have to learn from it and incorporate a lesson from it or else you’ll just make the same mistakes. But sometimes people's opinions are just irrelevant, good and bad, but its fun to listen out of curiosity.

Gavin: What are some projects people can look forward to seeing from you?

Geoff: There in lies the rub. A concept artist is usually "the man behind the curtain", essentially we’re the idea people, visual ideas, but almost never the final product. But I’m doing some designs for game figurines for Privateer Press at the moment. If they get made they won’t be my sculptures, but the design will have my invisible signature on it.

Gavin: Moving to local for a bit, what are your thoughts on our local art scene, both good and bad?

Geoff: The Good: Everyone is really chill with each other. Once they get out of the academic environment people seem to drop their competitiveness and really support and teach one another. When the opportunity is right, some amazing collaboration takes place. The 337 Project was a perfect example of that. The Bad: There definitely isn’t enough support in the local market. A lot of the best artists living in Utah sell out of state because they can’t make a living otherwise. People here just don’t want to pay for good art. You might see that as a vicious circle, "good artists sell elsewhere, and no one wants to pay for locally available second rate art", but that’s not the case. There are some great artists trying work locally but they really struggle.

Geoff: That’s a tough one. Things like Gallery Stroll, Craft Lake City, and the Arts Festival are awesome. But I think there needs to be an event that is more dedicated and focused on say the painting/drawing/sculpture aspects. It would be awesome if there were a separate Artist’s Market during the summer, like what they do down in Phoenix. Some pavilions in the park for a few weeks where artists can congregate, and then people would have a consolidated location to go to and check out great art.

Gavin: Speaking of Gallery Stroll, what's your take on it as a whole and what it's done for the art community?

Geoff: I think its great. Its exposure, and artists get to make new contacts and a little extra cash. It’s a great way to spend a summer evening downtown.

Geoff: Yeah. We’ve got an awesome group of people in the local comics and game industry that get together for Draw Night at NoBrow Coffee, every Tuesday night from 7-8:30PM to just draw and hang out. The first rule of Draw Night: there are no rules. The second rule of Draw Night: you have to draw. Also, check me out! My sketchblog can be found here, and my portfolio over here. Thanks man.