Saltas in Greece: Arrival in Athens

Hello from Athens: Just arrived to begin the First Ever City Weekly Tour of Greece with me as the travel host. Twelve of us will be staying in Athens at the Central Hotel on Apollonas Street right in the Plaka before leaving for the islands next Wednesday.--- The tour officially begins on Sunday, but I have a few loose ends to tie up so have gotten here early....among them getting a good meal and going to bed. 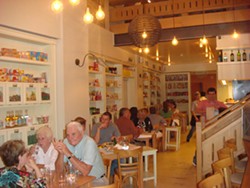 I've stayed in this area of Athens for 7 years and must have walked by the restaurant Tzitzikas kai Mermingas (The Cicada and the Ant) on Mitropoli street near Syntagma Square dozens of times without noticing it. I read about it in Living Planet and since it's only about 100 yards from the hotel, I gave it a try. T&M is a mezepoloion -- a place that serves plates of mezes, small plates (not counting their giant salads) and some compare them to tapas.

As soon as I sat down I was presented with a small shot of ouzo and some olives. Greeks remain quite civilized unlike some beer drinkers I've come to know. Then came the bread and extra virgin olive oil with a perfect flavor and colored dark green. From the menu I just ordered two things I'd never had before and became pleasantly surprised. 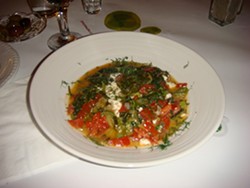 First up was the "Vlitokorfes Saganaki" -- Vlita, a standard and popular Greek green known in the US as Amaranth, was sauted with tomato and fresh herbs, mostly dill. The dish was the perfect welcome to Greece--fresh, different and healthy.

Next came "Sardeles Fileto sta Karvouna", or simply, Grilled Sardine Fillets. That's something you just don't find in Utah and it, too, was excellent.

After a glass of the local white wine I was out the door for a short walk to Syntagma Square (Constitution Square), site of the Greek Parliament building, the place where all the riots take place. There are none scheduled that I know of, and I promised a riot, so I hope the travelers will forgive me. Then it was back to the hotel for some nani nani--Sleep. 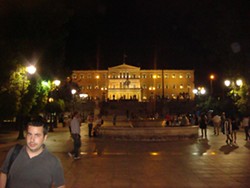 Later from Greece where it's 9 hours ahead of you in Utah. So I'll know the Utes will win before you do come this Saturday.