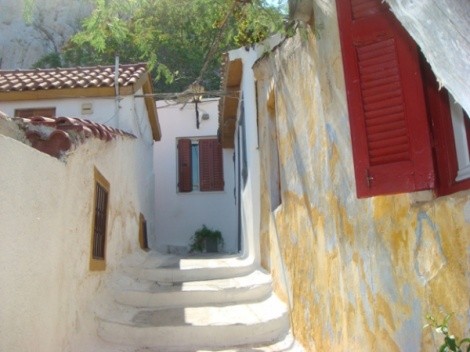 Not much happened on Saturday. A few more people arrived and it was a non-eventful day as folks continued to settle in ---and wander the streets and alleys of Athens including the area right under the Acropolis called Anafiotika, which was settled by islanders from Anafi and has the look of an island village (right).

On Saturday night, though, wow! Relatives drove us into the hills near Mt. Penteli (where much of the ancient Greek marble was quarried for the Acropolis, etc.) to a restaurant like none I've ever seen. The place seats--get this--2,000 people, by far mostly outdoors on sprawling terrace after terrace. 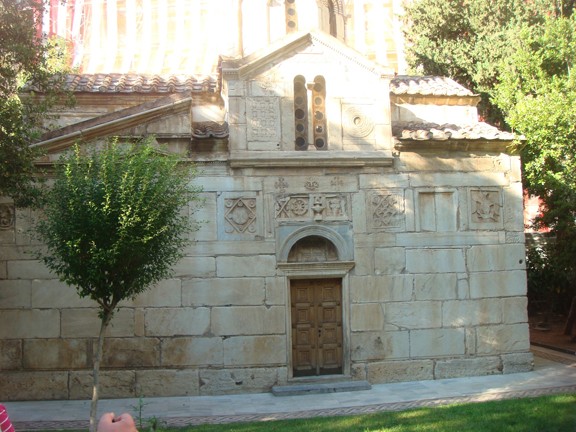 And the meal was fantastic. I've had lots of meals in Greece and this was one of the better ones by far--kokkoretsi (roasted lamb innards), kontosouvli (basically piles of meat), paidakia (lamb chops) and lamb roast. Oh--plus salads, appetizers and dessert. When the meal ended we retreated back to Athens for a nights rest before the City Weekly tour officially begins and I realized that in just four days, I'd eaten more meat than I have in three months. Protein overload. 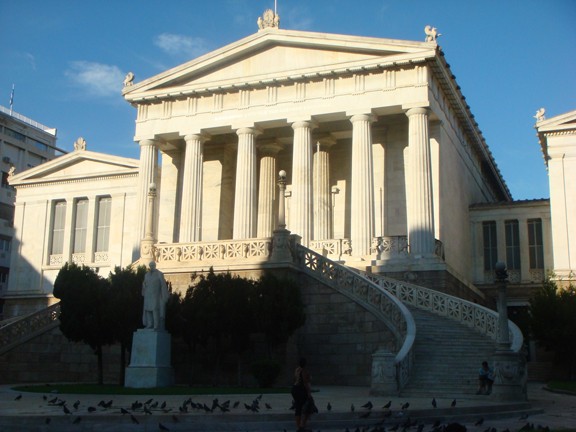 We began our on Sunday "tour" by viewing some of the key elements of understanding Greece: Greeks are united by history, culture and religion. So in short order we walked past the Metropolis of Athens, where the Athens Greek Orthodox Bishop presides. Next to it is the ancient Agia Geogeopikis (above left), a tiny Byzantine Church that dates to 1050 A.D. We walked past the statue of the Greek hero Kolokotronis, then to the Athens Academy, Athens University, and the Athens Library (right), each of which replicates the beautiful structures of Ancient Greece. 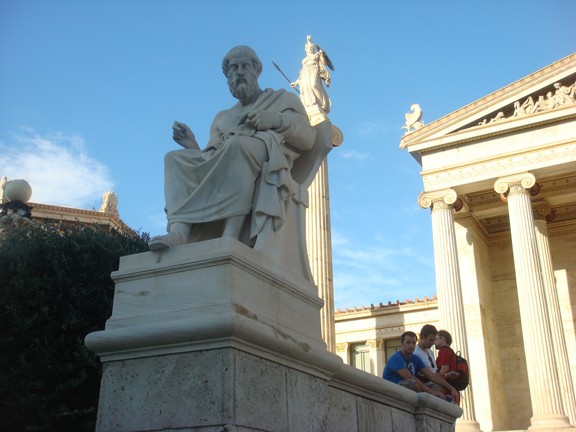 After the history and religion lesson, we partook of the culture, starting with a crowded ride on the Athens Metro. It's actually a very nice subway system and perhaps the only one in the world that displays for all to see, world class ancient relics (discovered with nearly ever scoop of a shovel as the system was being built; 50,000 relics were found just building or adding to the downtown subway lines). We exited to the large and lively Sunday crowds in Monastiraki Square where it's nearly impossible to get a bad deal on anything. This is flea market central and even the brontosaurus sized bottles of water are only 1 Euro, compared to 4 Euros or more in the Plaka area. 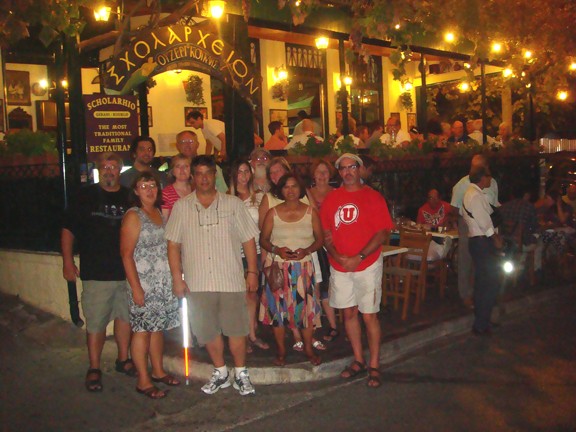 Finally dinner. We ate at Scholario (right; there's an old Athens school nearby) which makes it really simple, so was a good first choice. Greek menus can be tough on newcomers and this is an easy way to become introduced to Greek food. All you do is pay a set price and the waiter delivers a display of small plates to your table. No reading necessary. The number of choices depends on your party size. The food is prepared very traditionally, which means an American palate won't understand it at first pass--some items are purposely served cold or room temperature, for example. As well, there's nothing fancy or nouveau about the servings themselves--some are very good, some are just good enough, but in the end a meal there is quite satisfying. Not to mention, this family operation is very friendly (comping ouzo all around for example, just for showing up, then providing dessert, too; Greek hosts assume everyone will have wine or ouzo and also a rich dessert. Some of us don't do the former and some don't do the latter).

Finally back to the hotel for late night drinks--and Cuban cigars for the boys--at the rooftop patio. The gorgeous view of the lit up Acropolis at night is hypnotic. Day 1 was a good start. 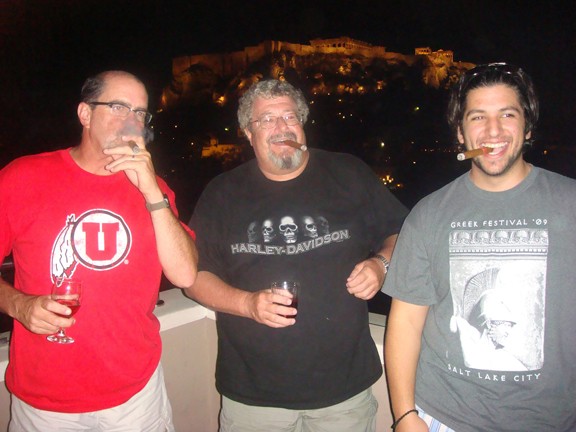