Saturday, Sept. 25: The Salt City Derby Girls and Ogden’s Junction City Roller Dolls mixed players for a charity half-bout Saturday night at the Salt Palace, followed by a SCDG bout between the Sisters of No Mercy and the Bomber Babes. ---

Up first, SCDG and JCRD skaters were mixed and matched into two teams, Black Mambas and White Lightning, for a single-period 30-minute bout benefiting The Road Home. Since neither team had worked together much prior to Saturday, there was little strategic cohesion and mucho messy defensive packs—but the Black Mambas pulled ahead first, thanks to leading SCDG jammer China White, at one point assisted with a whip from former league-mate Lady Octane, now with JCRD.

In the double-header’s second full bout, last-ranked SCDG teams Sisters of No Mercy and the Bomber Babes (Leave It to Cleavers and the Death Dealers will face off in the SCDG Championship Bout on Oct. 16) battled it out to decide who won’t end up on the bottom for the 2010 season. The Bombers were seemingly at a disadvantage, missing ace jammer NOS—who was injured at Boise’s Spudtown Knockdown tourney a few weeks ago—and a handful of recently departed team members. But, substitutes Contessa Danger (from the Cleavers) and Lady GoGo (of the Dealers) juiced the Bombers’ jamming game well enough to keep up with the Sisters—at least for the first half.

Score at halftime: Sisters of No Mercy 50, Bomber Babes 23.

Longtime Sister Ashes to Ashes, skating her last game with the league before retiring, was the dominant jammer for most of the night, eventually driving her team’s lead to 40 points ahead of the Bombers and beyond. Bomber Muruka proved to her team’s MVP of the bout, playing both offense and defense with more power than she’s shown all season; likewise, Thigh Master beefed up the Bombers’ blocking ably in response to the Sisters’ infamous Wall of Black. As the bout neared its end, Sister Miss Mafiosa pulled out one of roller derby’s flashiest (if not most effective) tricks, leg-whipping Ashes to Ashes to another scoring tear, as well as a closing-minutes “panty pass” (passing the jammer-indicating star helmet cover to another player), giving Ashes the last jam of the night. 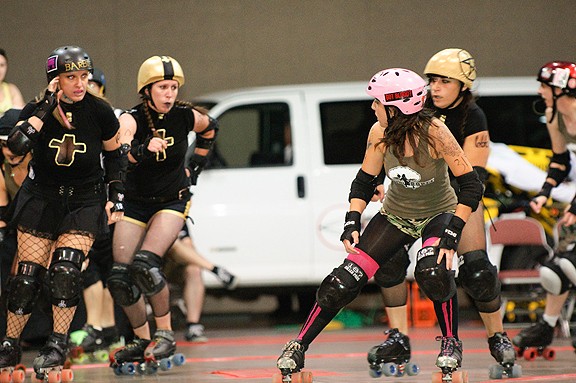