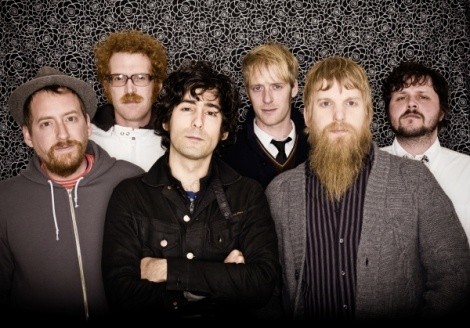 Like many of you, I WAS planning on hitting the LCD Soundsystem show Tuesday night. That was before those hipster gods bagged their SLC show. Thankfully, there are fine alternatives for the evening.---

You can start with Hot Chip, the Brit dance-pop crew currently touring with James Murphy and the rest of the LCD crew. Hot Chip has no problem coming to Salt Lake City. They're out there on Twitter right now, looking for places to eat downtown. So consider the Hot Chip gig at In The Venue if you have a need to get your bootie groovin'. And really, who doesn't?

Up the road, and probably starting after Hot Chip shuts it down, The Urban Lounge is hosting what I'm thinking will be one of the best shows of the fall, a triple-bill of Blitzen Trapper, Fruit Bats and Pearly Gate Music. I'm a Blitzen Trapper (pictured) man myself, swayed by the band's intricate harmonies and not deterred by the equally present proggy tendencies. But Fruit Bats and Pearly Gate Music are intriguing attractions in their own right.

Before hitting the town, though, consider a stop at the Salt Lake City Main Library, where the Utah Humanities Book Festival kicks off four days of author appearances and special events perfect for you bibliophiles (and the people who love them.)

Finally, the two major parties' candidates for governor, Peter Corroon and Gary Herbert, are taking part in a "town hall meeting" at Libby Gardner Hall on the University of Utah campus Tuesday at 6 p.m. The event will address several topics, including education, Utah’s economy, immigration, and ethics reform, and you can even ask a question.