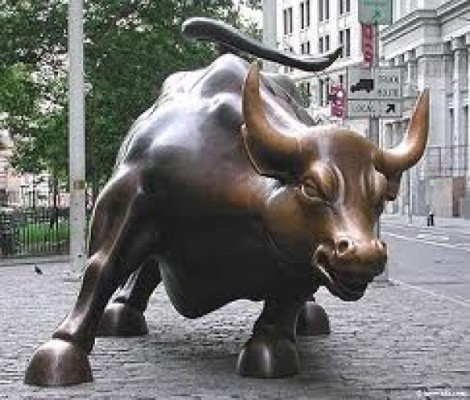 I'm not an economist. But, according to some bean-counters, the Dow Jones industrial average might top its 2007 peak of 14,165 during the coming year. Happy days!---

Gosh, it's amazing the stock market is doing so well under such a disastrous, "socialistic" administration! How'd that happen?

Not that we give a damn -- a record Dow will make a few soulless corporate Wall Street types even wealthier than they are now, but it won't do much for the wretched underemployed and underpaid minions. (I know, I know: The billionaires are supposed to create jobs with that money, which is why they cry like spoiled children whenever anybody suggests they pay their fair share of taxes. Except, as it turns out, years and years of Bush tax cuts didn't result in jobs, but in record unemployment. Apparently, instead of putting their money to work in order to strengthen the American economy, billionaires prefer to send their wealth on vacation, so that their dollars can refresh themselves lounging around on some Cayman Island beach.)

Less optimistic bean-counters think a record-high Dow is unlikely in 2011, but the fact that they're talking about it now instead of 10 years from now is what passes for news among the analyst set.

Also: Did you know that "the Great Recession ended in June of last year"? Hooray!