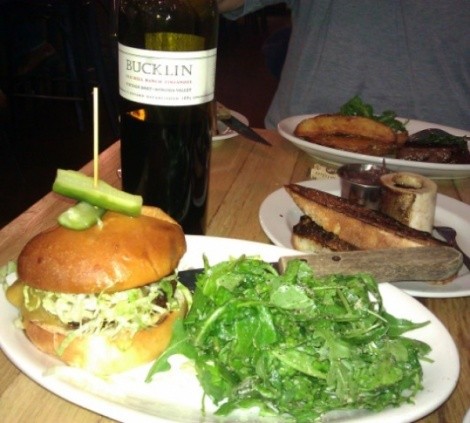 Meeting a friend for some lunchtime holiday cheer at the Copper Onion, he showed up with not one, but two very good bottles of wine. --- We'd previously discussed various burger-friendly wines, settled on Zinfandel, and were in hot pursuit of a perfect pairing. We found it: The Copper Onion burger and Bucklin Old Hill Ranch Zinfandel -- it doesn't get a lot better than this.%uFFFD

And, burgers don't get a lot better than the Copper Onion's. This is a superb burger, made with high-quality beef, cooked medium-rare, juicy, served on a bun baked in-house, and topped with homemade pickles. The pickles, too, are perfect: an ideal balance between sweet and sour, with a beautiful crunchy snap! Even if you don't have a burger, I encourage you to order the Copper Onion's "pot of pickles" ($3) to snack on (although, I don't recommend drinking wine with the pickles...).%uFFFD

We opened the two wines -- Bucklin Old Hill Ranch Zinfandel 2007 ($24.99) and Ravenswood Old Hill Zinfandel 2007 ($59.99). The reason these two wines were selected -- aside from being likely candidates for good pairings with burgers -- is that the two wines are made from the same grapes. It's rare to be able to taste two different expressions of wines made with grapes from the very same vineyard and same vintage.%uFFFD

Winemaker Will Bucklin (see my article about Bucklin here) makes his own wines from grapes grown at his Old Hill Ranch in Sonoma Valley, near Glen Ellen -- from some of the oldest vines in California. He also sells some of his grapes to Ravenswood, well-known for their excellent Zinfandel wines. So, the fruit in both bottles we opened at the Copper Onion were the same, picked at the same time, from the same vineyard; the difference was in how that fruit was ultimately treated by the winemakers.

Taking a sniff of each wine, the Bucklin seemed much fruitier on the nose to me -- the Ravenswood more closed. On the tongue, I had the same sensation: luscious fruit flavors from Bucklin .... not as much with the Ravenswood. And, the textures were different, too. The Bucklin Zin was silky and smooth, velvety even, going right smack down the center of the tongue. The Ravenswood Zin had a ring-around-the-tongue astringency, and made me pucker. Throughout a lengthy, two-hour lunch, the two wines continued to both emerge and diverge, with Bucklin getting better and better; the Ravenswood, not so much, becoming more intense the more it was exposed to air -- a little too%uFFFDintense for me.%uFFFD

The main difference between the two wines, I think -- without getting into a lot of technical minutiae -- lies in the use of oak by the respective winemakers. Will Bucklin barrel ages his Zinfandel for 20 months in 40% new French Saury oak. Ravenswood winemaker Joel Peterson, by contrast, ages his Old Hill Zin for 20 months in 34% new oak and 30% year-old oak. That's a significant difference in the amount of oak! It's an example of not leaving well enough alone and needlessly interfering with great grapes, I believe.

The Bucklin fruit is so lush from the outset -- great wines are made in the vineyard, not in the lab -- that too much oak is overkill. Don't get me wrong: both of the wines are very good. But side-by-side, I felt like Bucklin, priced some 35 bucks below the Ravenwood, blew it away. On the other hand, Ravenswood wines get raves from wine writers and the public. So perhaps I'm just more inclined towards the more elegant, even feminine, style of Bucklin versus Ravenswood.

As great as the burger at the Copper Onion is on its own, it reaches stratospheric heights when paired with Bucklin Old Hill Ranch Zinfandel. But, don't take my word for it. Take this pairing out for a spin yourself and let me know what you think.%uFFFD