The Boring Reincarnation Of Jodi Saeland 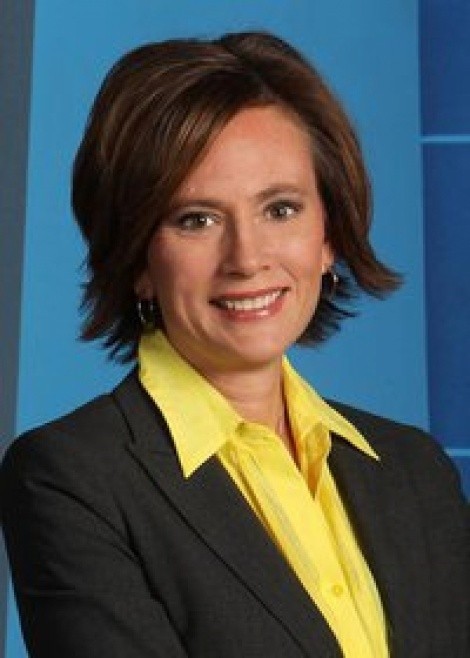 If you were one of the tens of thousands watching football on Saturday, more than likely you caught a glimpse of the Viper App promo that KSL was bombarding the viewing audience with on every local break they could. --- Which we could easily talk about how advertisement overkill drives people away from wanting to use it, but that's an entirely different topic... and their management wouldn't give two shits. Within this promo you saw all of KSL's weather personalities talking about their extensive coverage and the new free smart phone application, that they'd like you to believe somehow works just as well as their expensive weather equipment hooked up to an even more expensive radar. (Oh, its only on iTunes, sorry every other smart phone user, KSL hates you!) And let me tell you, this looks "exactly" like their readouts, ads and all.

Within the promo is the new (but not so new) Jodi Saeland, now complete with a shorter hair style and the perkiness taken down to the level of Decaf, so as not to scare the old folks. (I'd post a more up-to-date picture, but KSL spent more time updating their App and less on bios, so we'll be showcasing the past.) Two things caught my eye on this promo. First off: Saeland is no where near the KSL studios. She's standing on a street with autumn leaves blowing behind her, while the rest of the men are stuck at the desks showing you that expensive equipment. She appears so out of place its jarring to an extent. In fact, had the promo itself not been in HD, you could have sworn they stole the footage from KTVX's old “Close To Home” spots. Second thing: she went from wide-eyed and happy to professionally dull. You can hear it in her voice, the promo is so by-the-numbers from a cue card with no emotion behind it, they might as well have stuck a cardboard cutout of her on the street and played her lines from a voice recorder.

I thought to myself “No way, KSL couldn't have beaten her into the ground yet, she hasn't even been there a year. They need at least six months to break your spirit.” So I went to their website and checked out some of her weather reports. ...Hoooooooooooly crap, has she become boring! There is no decent banter of any kind, and what little exchange she has with anchors is so dry, it feels like they're talking about their weekend in the kitchen to kill time while they wait for someone's burrito to finish in the microwave. She even talked about snow, a weather occurrence I've personally watched other meteorologists describe like a passage from

War & Peace, and she threw it on the air like hauling garbage out to the street. Just another chore.

Now while I may not have every minor unspoken detail about Saeland's Fox 13 departure and new contract in front of me, I can understand her point of view and decision to a degree. She's had stints with several other affiliates and major stations including The Weather Channel. She spent twelve years at our FOX affiliate doing her best to make the weather exciting for a younger crowd. The majority of that time watching the evening newscast be gangbanged by “American Idol” from start to finish, to the point where they should have renamed it “Idol Recap At 9”. (Then again, my understanding is that she loved the show, so... to each their own.) She also survived the tsunami that is Allie MacKay, where if you came out of that alive at 13, you deserve an Emmy for bravery. She's earned a part-time schedule and time with the kids and the ability to slightly coast on her name in spades. ...But where's the line between “half-assed choreography” and “just not giving a damn”? And when did Saeland decide to hike across it?
[image-x]
I'm sure the overall opinion on this in the comments section will be “its just weather” or "don't pick on her", but considering the amount of cash that on-air talent take home every year for doing this, I believe a smile and some feeling in return for viewership isn't too much to ask for. So we'll leave it at this: Jodi... you're better, much better, far better than what we're seeing on air now. I know this because your friends at Fox 13 posted one too many clips of you on YouTube. Please, don't be the bobble-head personality everyone else at KSL seems to be, where you only move and talk when someone shakes you. As opposed to other “talent”, you actually have talent. Use it.