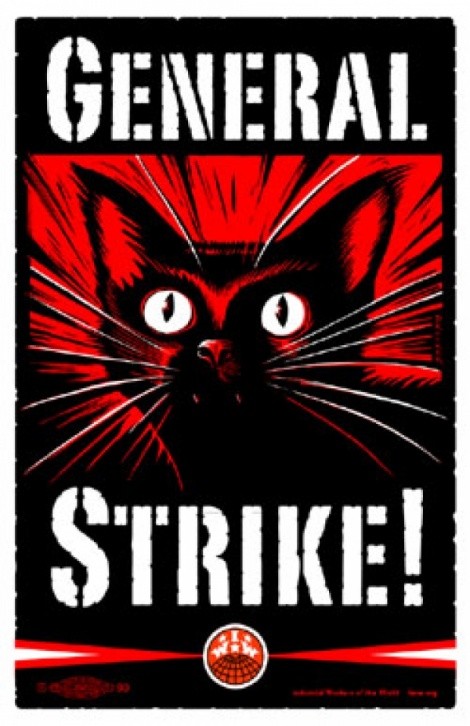 The IWW commissioned an Eric Drooker poster for the general strike that seems inevitable in Wisconsin, if Gov. Scott Walker gets his way in stripping public-sector workers of their long-held rights.--- It’s probably the best neo-social-realist design since Shepard Fairey’s “Hope” poster for the 2008 Obama campaign. (In fact, I like this one better, because it’s got a cat on it, and I like cats.)

According to an IWW pamphlet, a general strike is the only thing that will convince Walker that workers are serious about their collective-bargaining rights:

Governor Walker doesn't think that the protesters represent the rest of the state. He thinks that the majority of Wisconsin agrees with his attempt to strip workers of basic rights. He is wrong. Despite facing opposition from millions, Walker still won't budge from his position on this issue. It will take something bigger from the unions, and from the working-class as a whole: a general strike.

Perhaps the cat imagery is appropriate because organizing the left is, as they say, like herding cats.