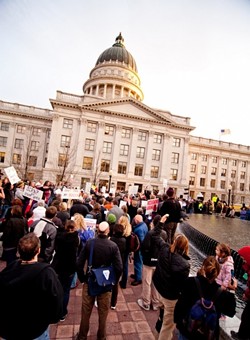 Hundreds gathered at the Utah Capitol tonight protesting a bill signed by the governor that guts Utah's open government records law known as GRAMA. Spotaneously, the protesters entered the Capitol and House Chamber, signing and beating drums on the last day of the 2011 Session.---

Criticism of House Bill 477--passed and signed by the governor March 7, within a week of its release to the public--has spanned Utah's usually hyper partisain politics, uniting conservatives and liberals in a common cause: the people versus their elected leaders in a fight to control information. In the words of Bob Aagard, who organized a rally against HB 477 in the Capitol March 7: ""The only way for the people to press the government is for the government to be open."

Referendum leaders announced they were able to submit paperwork to begin a citizen-led repeal of HB 477 just hours in advance of Gov. Gary Herbert signing Senate Bill 165, which would have eliminated online signatures in initiative and referendum campaigns. Sign up to volunteer or donate here.

For complete coverage of the Utah Legislature's unprecedented secrecy grab and gutting of Utah's 20-year-old Government Records Access and Management Act, go to

Photos from the rally outside, by David Newkirk.

This next one is from Di Lewis. Follow her on Twitter @dilewis and lifeofdi.wordpress.com. I was in the chamber but my battery was dead by then. Thanks Di!

This one is is taken at 6:42 p.m., a little more than an hour before protesters entered the capitol.