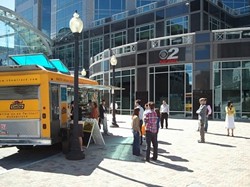 Under pressure from customers, Salt Lake City has created a way for foods trucks to serve food on Gallivan Ave., a location the city recently forced the Chow Truck to leave. But it may be more than Chow Truck showing up.---

SuAn Chow, owner of the Chow Truck, and devoted activist seeking changes in city's food-truck ordinances, recently started receiving parking tickets while parked on a pull-out on downtown's Gallivan Ave., despite having permission to be there from KUTV, the primary user of that pull-out. The ordinances are currently being revised.

The following e-mail was sent to food truck vendors shortly after City Weekly published a story addressing complaints and concerns from Chow, another food truck operator and customers.

Salt Lake City is sponsoring an event at Gallivan every Thursday throughout the summer in effort to provide a downtown location for mobile food trucks while the City undergoes a mobile food ordinance revision process.  Gallivan Avenue will be closed, the meters will be bagged, and self contained mobile food businesses will be allowed to operate from 10:00am – 2:00pm. We are currently limiting the space to 5 trucks which need to be self contained food truck operations and of course be licensed to operate in SLC.  Food trailers, carts, and stands, are prohibited.

Please feel free to contact me with any questions or if you would like to participate in this event.

Thesing told me to encourage other food truck operators to contact her if they are interested.  Call her at 801-535-7159. But, for now, only trucks are allowed, not the city's many food carts or other vendors (which are regulated separately from food trucks). "It has to be self-contained, not a truck and a trailer, because that's really what we're responding to for now. If we can grow the event throughout the summer, that's a possibility. For now, we're going to keep it in that parameter," Thesing said. "In response to market trends, we want to offer the mobile food trucks a place to operate this summer and Gallivan is a great venue for that."

This shows some flexibility in the city that hasn't always been there, methinks. Remember how long Jam (a three-time winner for Best of Utah's readers' choice of Best Gay Club) was kept in beer-only purgatory even for all those months when it seemed (and turned out that it was) a forgone conclusion that the city would allow them to serve liquor? The relatively-liquor friendly city government was the main obstruction to normalcy in that situation--not the state, like you might think.City Weekly first wrote about Jam's issues in July 2009, 18 months after Jam first received assurance from the city that the zone change was coming. On January 26, 2010, Jam finally served it's first cocktails to the general public.

So, Chow got assurance from the city in June 2010 that they would reassess the food truck ordinances. The first official meeting--with the Planning and Zoning Commission--happened in January 2011. How much longer it will take for changes to be implemented, no one knows, but you can bet SuAn Chow will be tapping her watch impatiently--maybe less so, though, with this Thursday/Gallivan food variance.