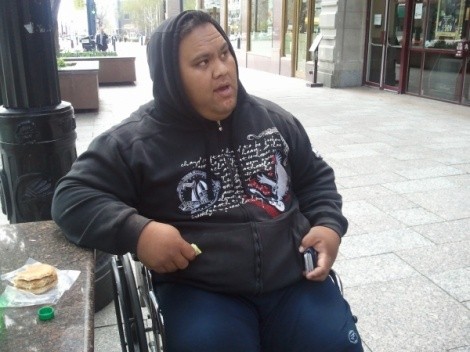 "The eye in the sky doesn't lie." That's what Siupelimani "Tiny" Muti says Officer Cardall of the Salt Lake City Police bike squad told him before issuing him a ticket for spitting on Main Street. Muti says the officer claimed that a camera caught him in the act.---

But a police representative says, to his knowledge, SLCPD has no permanent cameras pointed at Main Street (like they do at Pioneer Park). Additionally, Det. Dennis McGowan, the on-call public information officer this afternoon, was unaware of any special enforcement efforts on Main Street that might substantiate the claim that Muti was caught on camera (there are many private cameras around). McGowan declined to make available for interview the supervising officer of the bike squad, saying that's against policy. McGowan was not personally aware of Muti's situation.

Muti is facing a class B misdemeanor for spitting; that could be a fine up to $1905 and six months in jail (yes, really!). There is no "standard bail" which allows a cited person to just pay a fee and be done with it; a court appearance is mandatory (yes, really, for spitting!). .

Will Muti fight the ticket? "Of course," he says. He doesn't have a choice. "I can't pay this. If I had the money, I'd just pay." Muti suspects police are hoping he'll skip the court hearing or be unable to pay whatever fines he might be assessed; failure to appear or pay can result in a warrant and more jail time. He feels singled out for especially harsh treatment. 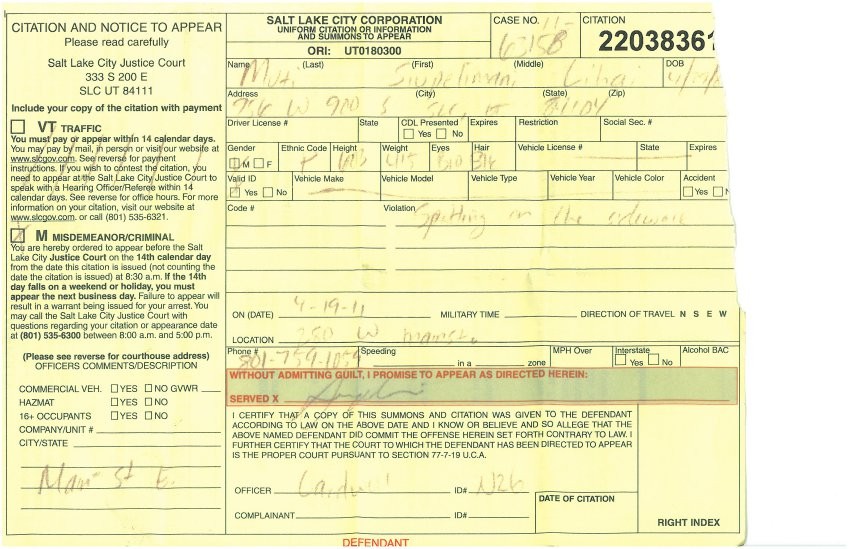 City Weekly readers were told in January the newly configured SLCPD bike squads would be "kinder, gentler." That news came in the wake of a federal judge issuing a restraining order against enforcement of the city's panhandling ordinances and Salt Lake City council declining to pass a newer, tougher anti-panhandling ordinance that many homeless people and homeless advocates believed was just another way to intimidate and harass homeless people. The anti-panhandling push was spearheaded by the Downtown Alliance, an arm of the Salt Lake Chamber.

Muti isn't your average Main Street pedestrian. He's on Main Street frequently between 200 South and 300 South--the block where City Weekly's offices are located. He has an unmistakable smile and is very popular. Muti has had periods of homelessness stemming from health issues--he has used a wheelchair in the last year due to psoriasis in his back--and counts many homeless or formerly homeless people as friends. Many people--homeless vets, panhandlers, Juggalos, street kids, even sometimes homeless families with babies--hang out in the same spot where Muti is a fixture, right by AJ's Quick Mart. Virtually no one but passers-by actually use the street is a social way aside from the group I just described; the cement chess boards go completely unused, benches occupied by no one but solitary smokers. Nevertheless, the scrum of people often hanging out there are sometimes targets of threats of loitering and related crimes.

SLCPD has long suspected Muti of selling marijuana from his Main Street hangout. They've said so to Muti himself. Muti denies the allegation; he's never been convicted of any crime in the state of Utah, court records show.

In March 2010, however, he was booked into jail by SLCPD on suspicion of distribution of a controlled substance (in his case, very small amounts of marijuana) and was charged with a third-degree felony, facing up to five years in prison (yes, really!). That case crumbled, however, and was all but dismissed, court records show; Muti was sentenced to two hours community service, which he says he completed. Muti was accused of arranging a drug deal, but says he merely lent his cell phone to a woman who then arranged to sell marijuana to an undercover police officer. The police report does not confirm but is not contradictory with Muti's version of events, see below.

In June 2010, on Muti's urging, City Weekly made a records request of SLCPD for all police reports mentioning Muti; in all but the March 2010 incident he is listed either as a cooperating witness or victim. SLCPD was and is legally obligated to state whether any police reports mentioning Muti exist but could not be released because they are attached to an ongoing investigation; they made no such claim in fulfilling the records request, suggesting either Muti is not subject to an ongoing investigation or SLCPD did not fully comply with Utah's Government Records Access and Management Act.

Though the case crumbled, the arrest led to Muti temporarily loosing his public housing, which he has since restored after some more time spent homeless.

Muti feels personally targeted by the spitting ticket. He suspects SLCPD is still convinced he sells marijuana and will do what it takes to intimidate him off the public street. But he's not easily intimidated--or shy. The affable giant has urged this reporter to write about his situation many times and carries himself with confident and jovial demeanor. For example, when I asked him if he felt racially profiled--he's of Pacific Islander decent--he said "Well, yeah, I know cops racially profile but I don't even care about that," he says with a laugh. His anger stems from SLCPD's seeming personal grudge against him.

Det. Dennis McGowan wouldn't address Muti's feelings of unfairness. He suggested Muti contact police internal affairs and that "every complaint is investigated thoroughly." He said there are no specific, ongoing enforcement priorities regarding spitting nor Main Street. McGowan added, "It would be very useful to us" to report that it's against the law to spit on the sidewalk or street.

So what do I think? Well, for good/substantial reasons or bogus ones--either way, reasons they won't share with us--SLCPD thinks Muti sells marijuana on Main Street--that's clear. They also clearly don't have evidence to convict him a drug charge. Do I think Muti is a marijuana dealer? Except for the charge that police couldn't/didn't prove, there is no evidence of that, and, I think, Muti's over-the-top willingness to publish the police accusations against him--and laugh them off--may speak to his innocence. On the other hand, just about everyone these days feels morally justified in violating marijuana laws, so maybe that laugh is the product of a person who's both morally and ethically right with himself (even if by statute he's breaking the law).

The last bit of intrigue is that Muti was unaware he currently has a warrant--I told him after seeing in the Utah Court System XChange system. I couldn't immediately obtain the January affidavit, but Muti is alleged to have violated the terms of his probation for the March 2010 incident, XChange shows. So, why wasn't Muti arrested today? Why didn't the officer even tell Muti about the warrant? Could it be that $2,500 bail isn't high and and SLCPD is hoping to "stack" warrants against him, as Muti suspects? Or are police--or their computer systems--too inept to link a spitter to his warrant? What if it had been a murder warrant?

I doubt this is over, and I doubt Muti will stop urging me to publish his travails. So, we'll probably see what happens.