What the Cluck? | Buzz Blog

City Weekly did not get the memo that covers of alternative news publications in the first week of June needed to be farmer-themed. --- It would seem the Catalyst, In Utah This Week and Utah Stories did heed the agrarian muse, with each designing variations on Grant Wood's iconic "American Gothic" painting (here). 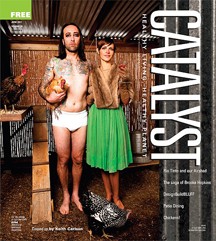 Catalyst and In Utah This Week uncannily featured bare-chested, grim-faced men with fowl clutched under their right arms. Utah Stories settled on a stylized depiction of the farmer and his sister in the original painting.

And then there's SLUG, whose grim-faced Viking, depicted in a block print style, promotes SLUG's annual beer issue. But, give him a shave, take off his horned helmet, replace his sword tip with a pitchfork, and his stony face would be a dead ringer for American Gothic's farmer. Minus his sister.

For the record, CW's June 2 cover featured a smiling woman in a three-way embrace with two fedora-hatted hipsters. No fowl, no pitchforks, no swords, no steins. She is, as you properly guessed, the farmer's daughter.