Hello to all you in-line-waiting, autograph-collecting, costume-designing, shower-requiring, “Twilight”-hating, Kevin Smith- questioning, getting-ready-to-hate-whatever-they-have-to-preview-at-Comic-Con enthusiasts! --- To be honest, I would much rather be at Comic-Con standing in the hot-ass heat waiting for the next line to get me to the convention center, which has another line to get in the door, that after you get through the door there's another line to piss and get a drink from standing in three lines than sitting around and have Pioneer Day shoved up my ass as if it were a religious holiday. But I don't have $10,000 to blow on a weekend in San Diego, so here I am getting ready to celebrate Pie & Beer Day with a small list of events to chat about. Before we delve into those, let's check out the latest addition to the 337 Memorial Wall.

First, an update. Two weeks ago, we posed a question about Courtney Blair's husband. To my astonished amazement, I got emails back saying the exact same thing. “You know, Gavin, I haven't seen him, either; perhaps he is fictional!” Well, we got proof from, of all sources, Courtney Blair herself, on her Facebook. Although I will say I've never seen him myself in person, I'll have to take her word for it for now. But if I see him in the next production at SLAC this coming season, we're gonna have words, Blair!

Moving onto events, way out in the West Desert they're still holding Element 11 this weekend. We didn't cover it as much this year because a lot of details weren't made clear before hand and we didn't want to mislead, but all the info is on their Website now! Granted, there's only a day and a half left as of when this post goes up, but that's still time for some of you hard trekking folk to get your stuff together and go celebrate what's left of the event. Don't forget the main burn this evening at 11PM!

Then, the majority of next week is boring as hell until we get to Friday with the Doom & Gloom Fest! For two nights straight, you get some of Utah's hardest and loudest at one of the proudest dives in the city, Burt's Tiki Lounge. Fourteen bands in all, with what will be the last performance you'll ever see of INVDRS, and brand-new material from Eagle Twin! If that doesn't sell you on these two nights, nothing will, and you're a dick for not going. 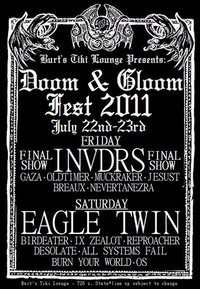 Moving into the following week: After all that settler shit is finished, there's a celebration for a brand-new group starting up. The SLC Photo Collective, which, as they describe themselves, is “a collaboration of artists providing facilities and equipment back to the community.” The collective will be a fully equipped studio (located at 561 West 200 South) with all the essentials needed to help any photographer get the most out of their craft. On Friday the July 29, there will be an official grand party opening featuring many of the state's best snap-shooters on hand to help the place open in style. Go check it out!

Meanwhile across town, Frosty Darling will be holding its 5th annual Cupcake Social! The short version of this event is that it's a cake walk with cupcakes. There'll be lots of fun events (especially for kids) with artists like Sri Whipple, Trent Call and Meg Charlier contributing coloring books, and Holy Water Buffalo playing a free show at 6 p.m.. Drop by and check it out, you'll have fun, or at least a cupcake to eat. And yes, there are vegan options.

And then two weeks from now will be the Salt Lake City Slutwalk. Based on the Toronto Slutwalk in response to their local police issuing a statement back in January 2011 about women reducing their risk to being assaulted by not dressing like sluts, the movement spread across their own country and over the border to where there are now several walks planned in the U.S. Here in SLC, we'll be throwing our own on July 30, with the walk going from the County Building all the way to the Capitol Building. Check out their Facebook page for details and ways to join in and support the cause.

As for the blog, we'll visit this month's Gallery Stroll, check out a local film that's been making some waves, look into a clothing line, chat with one of the newest galleries in town, chat with a recording studio and look into a special literary program at the U. At least that's the plan for now; as always, we'll see what happens.