This year's theatre season is going to kick off in some unique ways over the next few weeks. --- Some with challenging content, others with laughs and historical ties and a few simply presented for shock value. But the big production to lead off the '11-'12 theatre season doesn't even have a full run, and, in fact, has almost sold out on word-of-mouth alone.

Pygmalion Theatre Company will open up its season with the single-night engagement of Some Men, an examination of the lives of gay men in the United States through stories chronicled over the past 80 years. This one-night event happening on Oct. 10 will be performed by a celebrity cast including John Glover, John Benjamn Hicky, Justin Kirk, Fred Weller, Don Amendolia (who also serves as the director) Matt Gould and Jesse Peery. All proceeds from this play will be going to benefit the Utah Pride Center and the Courage Campaign, and those who cannot attend have been encouraged to donate. Today, we briefly chat with Jesse and Don, along with playwright Terrence McNally, and producers Tom Kirdahy and Suzi Dietz.

Some Men tickets at ArtTix

Gavin: Terrence, what was the inspiration behind this play when you wrote it?

Terrence: Our country's steady march to full civil rights for all citizens has finally coincided with my own progress towards personal happiness. In my play Some Men, I have remembered some of the repercussions of denial and imagined what our future as a society can be without them. Now that I am married to the man of my dreams, I want to do my all to ensure that equality for everyone. 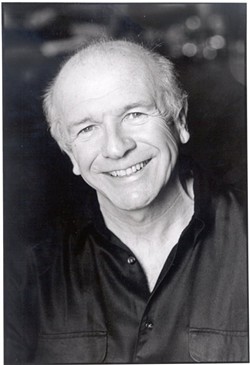 Gavin: Suzi and Tom, how did you both come across Some Men, and what was your initial reaction to the play?

Suzi: About six years ago, my friend Peter Schneider introduced me to a collection of music called Cafe Verboten. It was the soundtrack of the gay movement in the 20th century, a collection of music from Brick Top to the Bee Gees to Judy Garland to Barbra Streisand. We thought there was a theater piece somewhere in there but we didn't know what it was. I brought the collection to Philip Himberg of the Sundance Theater Institute and asked him what he thought. He agreed, and we made a list of playwrights we might ask to tackle the material. Terrence McNally was on the top of the list, and when we presented him with the idea, he said yes! Peter and I commissioned him to write the play, which we developed at Sundance's White Oak winter workshop. Inspired by the music, Terrence created a series of scenes from nearly every decade in the 20th century, depicting gay life in all its aspects. But the big idea of the play is that through all the years and the fight for rights and dignity, the gay community was really looking for a way to connect with each other and form permanent relationships. So Some Men became a play, with music, about gay life in the 20th century as seen through the prism of marriage and commitment.

Tom: This was the first play I had a hand in producing and from the first draft. I knew Terrence was onto something very special. I've been involved with the LGBT-rights movement my entire life. What makes Some Men so powerful is its exploration of the past and its hopeful nod toward the future. Fittingly, it's uproariously funny and laced with music -- two elements of gay culture that have been essential survival mechanisms over the years. Since its first production, Terrence and I have gotten married, and all through the ceremony I couldn't help but think of the many "some men" -- and women -- who made our exchange of vows possible. I can't wait to be presenting it in Salt Lake City.


Gavin: Suzi, what made you decide to bring it in as the opening play for Pygmalion this season?

Suzi: We had productions at the Philadelphia Theater Company and at New York's Second Stage, the latter being a huge hit. About two years ago, I attended an event for the Courage Campaign and realized how relevant this piece is to the work that Rick Jacobs and his group are doing in relation to LGBT rights. I thought it would make a great reading and fundraiser. So we did it in Los Angeles last year to great success, raising funds and awareness for the Prop. 8 battle. After we finished, Rick suggested that we take the show on the road, and since he had some connection to Salt Lake and the Utah Pride Center, he thought SLC would be a great place to start.

Gavin: When you started doing casting, why did you choose to branch out to more mainstream actors?

Suzi: The actors we are bringing from New York and L.A. are committed to the cause and in love with Terrence's funny and moving words. Some have done it before, some are new to it, but all are looking forward to bringing these characters and this struggle to life on October 10.

Gavin: Jesse, tell us about yourself and how you got into theater.

Jesse: I've been back in SLC for two years now after a six-year theater adventure in Chicago. I've missed my "stage family" here terribly, and am so electrified to be back working with some great ensembles. In fact, I'm honored to be a part of the cast for A Man Enters at Salt Lake Acting Company premiering this November.

Gavin: How did you hear about the production and what made you decide to audition for the play?

Jesse: There were a lot of people who were instrumental in getting my name and audition footage to the right people. I want to send a huge thank you to them right now.

Gavin: After receiving your part, what was it like for you going back over the play and finding the characters and bringing them to life your own way?

Jesse: This play is engaging on so many levels. From each character's internal conflict emerges this stirring story, for me, of compassion and resolve. It's gorgeously written -- and very witty -- so the characters I'm playing are already very real. To the question, "How did you bring your characters to life in your own way," I found the life of them by examining their struggles and what's at stake for each, and then "fighting" for what they want.

Jesse: I won't have met any of the other actors before this publication goes out, but rest assured, I am very excited to meet every single one of them.

Gavin: Don, what's your take on the play and thoughts on directing it?

Don: The journey of Some Men has coincided remarkably with the actual progress of the quest for equal marriage rights in our country. The struggle and sacrifice of gay men and women over the years has finally begun to bear fruit in our society. Every day does get better. Through it all, there has been the power of music to keep the soul aloft and impel us to these better times. To me, Some Men illustrates that very special power.