OK, did I let another man spread hot wax on my ass and rip it off? Yes. Was it worth it? Totally. But this story doesn’t start with me on all fours in a spa room. Nope, it begins a couple of months ago when I spotted a small but effective thumbnail ad in City Weekly.---

Now I hate to admit it, but I’m a sucker for great advertising. Typically, when I come across a good ad I never forget it. Hell, it’s been almost 15 years and I’m still singing this in the car….

But when I noticed a little gem on the back page that said, “Going where no man has gone before! Back, Crack and Sac Wax,” I was intrigued. Not so much because I wanted (or needed) undercarriage manscaping, but because the ad is so damned good.

I had a lot of questions: Why is there an astronaut drifting into a black hole? Who represents the astronaut? Is the black hole a metaphor? And, will this mission be dangerous? I thought about this ad for months as a possible story, and it was driving me nuts (no pun intended). I honestly couldn’t get it out of my head. I felt like Homer Simpson when he saw the ad for clown college.

So after some serious thought, I gave in. I decided to go where I’ve never gone before … to a guy who waxes grundles. The man behind the ad is Darrell McCurtain, a seasoned esthetician who’s been practicing everything from man waxes to massage therapy for over 10 years (and he could also be an astronaut). We agreed on a date and time, and I told Darrell that I’ve never been manscaped before. He reassured me that it wouldn’t hurt that bad. “Will … I bleed?” I asked over the phone. “No, but how high is your pain tolerance?” he asked.

“Then it’s probably going to hurt.”

A service like this will run you about $85, depending on how much of you is covered in man-carpet, so I wanted to do it right.

The morning of the waxing, I took a shower (because Darrell asked me to) and I said goodbye to my veritable forest. Standing there in the hot water, I thought about how I’ll probably have to temporarily give up bicycling, rope swings and horseback riding. “How bad can it be?” I thought. “It can’t be worse than stepping on a Lego.” Oh, how wrong I was. It was worse … much worse.

Darrell works out of The Golden Door, which is located inside the Waldorf Astoria in Park City. If you’ve never been, it’s a very modern, professional spa. Being in this posh setting made me feel a whole lot better about getting man-waxed. I mean, if I could pick anywhere to have a stranger peel hot wax off my crack 'n' sack, it would be here.

A "before" shot of Darrell and me. As you can see, I’m trying my best to look relaxed.


The spa room reminded me of a dimly lit dentist’s office. It’s a small room with a large table centered in the middle, a retractable UV-lit magnifying glass and a little hotplate on the side filled with a bluish-green wax. There was even Native American flute music playing softly in the back ground.

I%uFFFDrecommend%uFFFDletting this play for the remainder of the article.

“OK, go ahead and lie face down and take your robe off,” said Darrell. I reluctantly stripped down to my boxers and got on the table. “Your shorts, too.” I was childishly hoping we could do this thing with my underwear on. Unfortunately, that was not an option. Since I had no choice, I lay out on the table like a scared puppy.

Darrell started out by waxing my tramp-stamp zone, which, pain-wise, wasn’t that bad. I figured this would be a good time to get to know Darrell before we really got to know each other. “So how did you get into butthole waxing?” I asked. “Well, no one was doing it at the time and I guessed that men would want manscaping done since most female estheticians don’t do it. Mostly because they’re afraid of creepy guys.”

“Is your clientele mostly guys?” I asked.

“Yeah, for that ad. I get swimmers, body builders, all types. But I do a lot of other services, too: skincare, pedicures, manicures. That ad is just for this particular service.” Over the years, Darrell’s had a lot of fun with his wax ads, occasionally switching it up to things like, “Rooster and Kitty Wax,” “Wax your man-candy,” and “Boyzillians.”

Darrell told me to think about something other than what was going down, but all I could think about was the well-being of my rooster.


Darrell finished up this area and started moving south. “Okay, I need you to get on your elbows and knees. The biggest thing is to just relax and don’t clench,” instructed Darrell. I wanted him to do a good job and wrap this up in a timely fashion. But I found his request nearly impossible since my natural instinct has always been to clench when I’m frightened.

Now, I’m not going to get too graphic here, but let’s just say getting waxed on the walls of the canyon doesn’t hurt that bad. It’s getting waxed right in the abyss that will make a grown man cry. 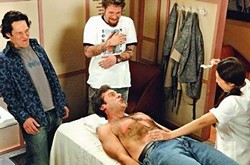 Though the chest is a painful spot, Steve has no idea what I went through.


“Hey, the wax is really warm. It feels like I’m wearing a little hat down there,” I said to Darrell as he laughed and swiftly tore off the wax without hesitation.

“Jesus Christ!” I screamed as tears welled up in my eyes.

“Did that hurt?" asked Darrell.

“Fuck, it felt like I just dipped my ass in a hornet's nest!”

Darrell did a few more agonizing pulls and then asked me to flip over onto my back, which you would think would be awkward, but at this point I felt like Darrell knew me better than my girlfriend. I flipped over and got into the periscope position.

I’ll spare you some details here, as well, and just say that the balls are the worst. We all know it’s a scientific fact that the testicles get smaller when it’s cold. But through this experience, I learned that they can get even smaller when tortured. I told Darrell I couldn’t go any further, that I wanted to quit. But Darrell, being the perfectionist he is, wouldn’t stop till every last hair was gone.

When Darrell finished, I sat up in a cold sweat and checked the damage. “Oh my god, it looks like I have a baby dick! … nice work.” He did a really good job, but words cannot explain how happy I was that it was over. I was sore and swollen. But on the plus side, my real estate was smoother than a pair of plumbs.

Yes, they look strikingly similar to this.

I’ll be completely honest when I say I’m not sure why anyone would want this done. On one hand, I’m now closer with my girlfriend (seeing as she was there laughing at my pain and taking photos) and I can now sport a thong with confidence. But as previously mentioned, I’m a huge pussy and I don’t think I could ever do it again. Who knows? If I ever find myself in a situation where I need my grundle to resemble Bruce Willis, then I would definitely call Darrell.

Mission accomplished. Not only am I a product of effective advertising, but I have gone where no man has gone before.