When I pulled up I wasn’t sure if I were in the right place. For some reason, the address led me to a storage unit facility in Midvale. But when I drove past an open unit with a bunch of guys in spandex mingling around outside, I knew I was on target..---

You see, a couple of weeks ago, I spotted a post on Craigslist that advertised a training facility for wrestlers here in SLC. “Trainers looking for new students. Years of experience and a full-sized wrestling ring are just some of the tools that will be available to you.” I can safely say I’ve never wanted to be a wrestler, but I’ve always wondered what was up with 5 Knuckle Shuffle, so I figured I should go check ’em out.

I had made a smart decision earlier that morning and decided to wear my Undertaker T-shirt. So when I got out of the car and walked up to the fellas, it earned some instant street cred. “Are you an Undertaker fan?” asked a guy with no shirt and a bleached faux hawk. I wasn't sure if this were a trick question or not. “Eh, kinda,” I said with hesitation, “but I’m not a huuuge fan.” My answer was adequate and they chatted for a few minutes about the likelihood of the Undertaker retiring this year. Apparently, they knew their shit, and well they should. This is their obsession. They’re called Great Basin Wrestling, and, essentially, it’s a promotional wrestling company that consists of enthusiasts who work normal 9 to 5s but once a month don spandex and crack skulls.

The Real Captain America puts the hurt on Gemini Havoc

Unless you’re a fan of local wrestling (i.e., WAR -Wrestling Alliance of the Rockies, or ACW - American Championship Wrestling), you've probably never heard of  'em. “I just do it for the passion … and I puke a lot,” laughed a wrestler who goes by the moniker Gemini Havoc. Besides dropping moves like the Diamond Cutter, Gemini Havoc also works as a cashier at Smith's. “You know, it’s cool. Occasionally, I’ll have people ask for autographs while I’m at work. But I don’t really care about any of that. [Wrestling] don’t pay the bills,” he shrugs his shoulders, “so whatever.”

This outfit is run by 12-year wrestling veteran Chad Bryant (which is also his wrestling name) and Nic Hardy, who goes by Psycho. Training consists of a loose schedule from Thursday-Sunday and it’s pretty much all men, expect for one female wrestler named Starfire. She’s one of only 6 females in the state who wrestle competitively, usually against male opponents.“It’s not a big deal, it actually makes no difference to me. I've been doing this for about a year now and I love it."

Now, before they do any wrestling, the crew warms up by running some drills in the ring. Whatever you're thinking, it's not that. Actually, warm-ups include forward and backward tumbles, push-ups and suicide sprints while bouncing off the ropes. After about 10 minutes of drills, Gemini Havoc had enough, stumbles outside and yacks.

“Fucking Chuck-a-Rama!” he says under his breath while staggering back to the ring. “So, what do you guys usually eat before a match?” I asked. Everyone laughs. “Well, I try to have something light,” explained Gemini Havoc. “You know, maybe Subway, protein bars; stuff like that.” This was shocking to me because whenever I eat Subway I end up feeling like this.

Despite the shitty diet, these guys push themselves pretty hard. “I’ve been picked up and thrown out of a ring onto a concrete floor,“ pointed out Psycho, “knocked my teeth out, man.” Since these things can, and often do, occur, they keep a licensed EMT on the premise in case something awesome happens. “I’m basically the blood handler,” points out their EMT, Josh Murray. “It sounds worse than it is. I mean, sometimes guys will scratch their heads -- which is called gigging -- so that they bleed all over their face and look tough. Usually, they’ll take an Ibuprofen to thin the blood. So you know, I’m there to help contain the mess.”

Obviously, no one “gigs” themselves during practice. So most of the time, Murray deals with popped-out shoulders, minor sprains and the occasional concussion -- kinda like the one that happened while I was there to a wrestler called Hayden. Unfortunately, the poor guy was concussed during warm-ups and had to sit out for the rest of the day.

In the foreground, Great Basin’s referee Ryno. Hayden taking a breather in the back.

For the remainder of the day, some of the guys grappled in the ring. Havoc and The Real Captain America faced off and worked on some holds. “Daaah!” yelled Captain America while pounding his hands on the floor. Havoc held his head back and grinned at the camera. It’s fake as hell. But I’m not gonna lie, it’s mildly entertaining watching these guys pretend to be in severe pain. They really, really, really do love this shit. 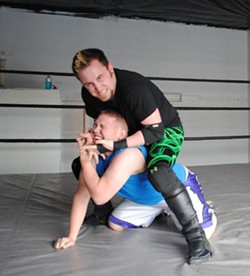 Though it’s run out of a storage unit and it’s a ridiculously small operation, you have to give credit to Great Basin Wrestling for doing what they love and their passionate drive. “We just want to offer a space for people who are interested in taking that first step in wrestling and wanna have some fun,” proclaimed Pycho. If you are wondering about the cost to train with this league of badasses, it’s only $100 a month for the first six months, then it drops to $20 a month after that. Best part is, you’re guaranteed at least one professional match. If you're still not sure if this is for you, then maybe Randy Savage (RIP) can inspire you. Perhaps someday this could be you. Ooooh, yeah!