Saturday, May 5: Over a year in the making (and barely a week in the training), the Salt City Derby Girls’ debut banked-track bout at the Salt Palace went mostly smoove—unless you were a Death Dealer. ---

SCDG’s newly purchased banked track doesn’t seem as tall or steep as the tracks of the ‘70s, but it is fast: Jams (periods of play) are only a minute long, and that’s all a skilled skater needs to make a scoring lap or two—and there are no local skaters more skilled than Salt City veterans RollHer Kitty (of the Death Dealers) and NOS (Bomber Babes). Their teams haven’t played against each other since SCDG’s last real season in 2010, when the undefeated Dealers were crowned that year’s champions and the Bomber Babes were in complete disarray. Two years makes all the difference: The newly reinvigorated Bombers matched the Dealers point-for-point in the first of four 15-minute periods (as opposed to flat-track derby’s two 30-minute periods), and then edged up by over 20 by the end of the second. Score at halftime: Bomber Babes 83, Death Dealers 61.

All night, both teams had been extremely aggressive on defense (and, as you’d imagine, falling down and piling up frequently on the angled surface); neither let up in the third period, with the Bombers’ Muruka (and later Phatal Pheromone) taking bout-stopping helmet-smackers on the track and the Dealers’ Etta Bull being ejected from the game entirely for mounting penalties. By the beginning of the fourth and final period, the Bombers’ lead was insurmountable, even with strong scoring runs by the Dealers’ RollerHer Kitty, Boston Bash-Her and impressive rookie Xena Whorrier Princess, who was nothing more than a blazing, purple-hot-pantsed blur whenever she strapped on the jam star. Final score: Bomber Babes 174, Death Dealers 112.

It wasn’t a perfect debut on the banked track, but neither was the Salt City Derby Girls’ first public flat-track bout at a roller-rink in 2006—pioneerin’ ain’t easy, as Utahns should know. Besides, SCDG has over a month to work out the kinks before the next bout on Saturday, June 30 at the Salt Palace, when the Sisters of No Mercy take on the Bomber Babes; tickets and info: SLCDerby.com and Facebook. Full local derby schedules here: Utah Roller Derby 2012.

Watch for video of Saturday’s full bout on Xfinity On Demand in the coming weeks, or check out Shooter’s pics below (Bomber Babes in green, Death Dealers in purple): 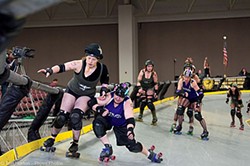 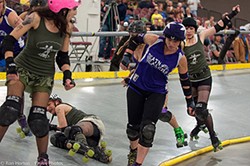