Local Releases: Self-Titling Gets Your Name Out! | Buzz Blog

Local Releases: Self-Titling Gets Your Name Out!

This week, we've got a nice mix of weekend shows, albums that came in under the radar and a few that are just being put out there early next week. --- Slight correction from last week: Due to the Rooftop Concert Series, the Blue Aces show we talked about last week was pushed up a week to tonight. So head over to Velour for that show! Before we dive into this week's shows, let's discuss some that popped up without a formal showcase. We'll start off with the latest release from The Dhoon, the solo project of SLC musician/producer Phillip Gipson. This really isn't what you would call a “dedicated project” but more of an off-and-on fancy for Gipson. It started back in late 2005, which led to his first release, The Dhoon Sessions, which had more of an electro pop/rock feeling. Three years later, the music shifted to more of a lo-fi coldwave kind of sound and the release of his follow-up EP, Bungalow One. Now over three years later, he's bumped up the production for the sophomore release, Bright In No Light. It's got a very, shall we say, Roger Waters feel to it; it's at least worth checking out. You can download the entire album for free off his Bandcamp page.

Next up is the debut release from local dubstep master mrgizmoe -- the alter ego of electronic music producer and Los Angeles transplant Zachary Alonzo; you may have seen him around town commanding the booth, namely over at W Lounge, where he's seemed to make a nice home. Now he's got a brand-new album out full of beatstrumentals called PRJKT.GZMO. Believe it or not, this album actually has a nice flow going for it, as opposed to many in the genre, that doesn't just swap from beat to beat. There was some careful planing that went into the presentation of this, which fans should appreciate. You can get a copy for $8 off Bandcamp, CD Baby, iTunes and a few other spots.

Moving on to something slightly electro, we have the debut release from Songs Become Water. This is the two-man “electroacoustic” band comprised of Michael Escalante and Danny Jasperson, which combines elements of indie rock and new haven. The duo have played occasional shows but really haven't struck out on to the music scene as much as you'd think they might with that kind of a combination. The band just put out their debut EP, Hypnopompy, which very much sounds like a band you'd find playing a coffee shop on a rainy night. Whether that's the vibe they were going for or not, who knows, but it sounds nice. You can download a copy off their Bandcamp page for just $6.

While we're discussing acoustic rock, let's look at the debut release from Coppertone Park -- another two man project, this one consisting of cousins Montey Cruze and Jeramie Velarde, veterans of the Utah music scene, who have been a part of several bands that have come and gone, most recently Blindfold 801 and Radio Courtesy. The two decided to get together and record some of the songs they've been holding onto over the years, and compiled them all into this self-titled full-length album. Nothing too fancy about this release, just simply a couple guys with guitars and a mic; makes for a good midday listening. You can download the whole album for $4 off their Bandcamp page. 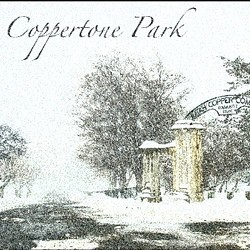 Speaking of self-titled releases, we briefly have to mention the latest from Black Hole. I know what you're thinking ... “Black Hole!?! Holy shit! Why didn't I hear about this?!” Well, the truth is the band didn't really publicize it, or at least not intentionally. A mixup with Burt's advertised their show last week as an album-release show, when, in fact, the band had no intentions of releasing anything just yet. So on a whim, the group recorded a number of tracks all in one session for a single 44-minute track on a self-titled release. The band aren't even really selling the album, but rather are giving copies away for people to download and pass around to others. Here's a glimpse of the cover art for those of you interested; go out and find this rare rock gem now wandering the streets of SLC.

Continuing the self-titled trend, let's talk about the debut release from TwinPlus. Well ... debut release may be a technicality on this one, as TwinPlus is a solo project from Fox Van Cleef drummer Erich Newey. Newey is no stranger to making his own projects, as he recorded another solo album under his name last year called Steady. This time, Newey takes a laptop to the stage with programmed bass and drums to play by his side as he commands the guitar and the mic. He spent most of 2011 putting together this full-length album with Wes Johnson at Archive Recordings. It's pretty damned good -- nice mix of alternative and progressive rock; worth at least a listen. You can download a copy for a “name your price” tag off his Bandcamp page.

Moving on to release shows, tonight we'll see the debut release from Triggers & Slips! Rather than wax eloquently on the group and their history, I'll point you to the interview I did with the group back in late March. They've been hard at work on their self-titled EP over at Salt Lake Recording Service, and the work shows ,as this is one of the finest local country/folk albums you'll probably see all year. A little something of everything: If you want a number you can dance to, it's “Old Friends” or one you can drink to is “Aftermath.” If you're a music lover, it's worth buying just for the musicianship and attention to detail. You can read more details in CW's Austen Diamond's Liner Notes post, and you can pick up a copy at their release show in at The Garage, a venue most fitting for the band, with Luke Benson opening. Just $5, kicking off at 9 p.m.

The other release show in town tonight is in a most odd location for local music in general, but the Salt Palace will play host to the debut release from Honey -- the stage name for R&B/hip-hop singer Rhonda Duvall, who is no stranger to music as she's lent her vocals to several local artists and a few nationals such as Eternal from the KillaBeez, Baby Bash, Cyprus Hill, E-40 and ZigZag of NBRidas. In 2010, she put out her debut full-length album, As Sweet As... Honey, but it barely got attention from local fans and even U92 failed to hype it, leaving it lying in the dust. Honey's back with a brand-new album, but that's all we can tell you aside from pimping out the show. There has been nothing given to press about this, and all attempts on my part just to get samples and the album art have gone unanswered. If you're interested in the album, you're flying blind for the show tonight. Read the details below if you're interested in the show.

Now, shows are planned for the next two albums, but they're worth noting as May releases. The first one comes to us from a musician named Billy. I'll be honest, I busted my ass trying to figure out who Billy was this week, but I just don't have a clue. Apparently, I don't know Billy ... oh, well. (And if i'ts an inside joke about a popular musician, it doesn't play off well when searching out info.) What I can tell you is he put out an album back in 2007 called Songs For A Depressed Jesus, which he recorded and produced with Isaac Howard in 2007. Apparently, he went quiet for about four years before he picked the guitar back up and recorded this second full-length album, Bed/Bones. The album is described as a split release, half with a band and half solo, entirely produced by Andrew Glassett of Nolens Volens fame. It's a pretty decent album that's worth a listen at least; you can download it for $5 off his Bandcamp site now, even though it officially comes out on May 13.

And finally, while there may be no official show for it, we'll see the latest release from Huldra. The band came into their own with their debut release, Signals Into The Void, back in November of last year, and in the process have made an impact on the local metal scene with their near-packed shows. Now the group are back in the form of a split LP with Dustbloom! For those of you unfamiliar, Dustbloom (seen above) are a post-hardcore band out of SLC who have been gaining some traction around the city since forming in early 2011. They released a couple of tracks, most notably “The Hopeful Honeymooners” on Soundcloud, but this split will mark their official debut release onto the Utah music scene. You can pre-order the album right now before it is officially released on May 15; I highly recommend picking this one up!