A couple of months ago we chatted about the split of one tattoo shop into two and talked to the staff from one of them. Today, we chat with the second shop. --- To briefly rewind, when Eleventh St. Electric shut down, the artists formed two new locations: Cathedral Tattoo downtown and Yellow Rose Tattoo on 9th East. Rather than trying to start over from scratch with only a couple artists from the old location, Yellow Rose brought back most of the staff that patrons recognized while changing their location by only a few blocks, and brought on newer talent to keep the ink flowing. 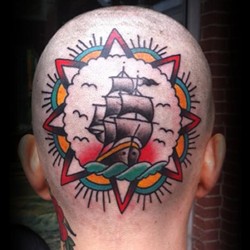 We briefly chat with several of the artists from the shop about how they got into tattooing, their time at Eleventh St., forming the new shop and their thoughts on the tattoo community in SLC. (For this interview, the artists chose to answer as a group, which includes artists Matthew Miskol,Gailon Justus, Luis Flores and Jon Chatelain.)

Gavin: Hey, everyone. First off, tell us a little bit about yourselves.

YRT: Yellow Rose was established in 2010. Gailon Justus, Luis Flores, Matthew Miskol, Jon Chatelain and Troy Trujillo came over from Eleventh Street. We also hired Cody Collins to work at Yellow Rose; he previously tattooed in California. We've been open and going for about two years.

Gavin: How did you first take an interest in art, and what were some early inspirations for you?

YRT: Most of us started off being interested in art at a young age, and then took interest in getting tattooed. We all had interests in being tattooers and worked our way up to where we are now.

Gavin: What drew your interest specifically toward tattooing?

Gavin: Did any of you seek out any formal college for artwork prior to tattooing?

YRT: Not really. Cody spent three weeks at a junior college. Does that count?

Gavin: How did each of you formally break into the business, and what was it like for you learning the ropes?

YRT: We all started working at shops as helpers. That’s usually the first step towards tattooing. Learning to deal with customers and the public is key. One might be great at art, but if they are a social recluse, it doesn't really work for tattooing. Being able to communicate with customers, being able to translate what they are saying into a good drawing and tattoo is a must. Working your way to the position of tattooer is not always fun. You're the one who is cleaning up after everyone and usually seem unappreciated. But, if you can handle the job, you'll be rewarded.

Gavin: What was your first real experience like creating a tattoo, and how did it turn out?

YRT: Making the transition of being an artist on paper to an artist on skin is not an easy transition. Paper doesn't move, talk, yell, cry, or pass out. It's one of the most difficult factors in making a good tattoo. Most of us had some prior experience with homemade tattoos, but you find out quickly there's a lot more to it.

Gavin: How was it for each of you learning the craft and honing in your skills to create work on people?

YRT: Just like anything, the first time usually isn't all that great. For most of us, we had friends or family who are confident that we wouldn't do a horrible job. It was a long road, and the more you learn the more figure out, there is so much more ahead.

Gavin: Most of you met each other from working at Eleventh St. Electric Gallery. What was it like working there and helping building that shop up over time?

YRT: It was good. It was like a bunch of kids without parents. We were able to run free and do as we pleased; learning and communicating on our own. Six of us actually came from Lost Art Tattoo to form Eleventh Street. Over time, things change and peoples' direction change, as well, but building Eleventh Street was amazing, and like everything in tattooing, it was difficult.

Gavin: While each of you were coming up and honing your craft, at what point did you break off from doing prints from the wall and start doing original works in your own style?

YRT: I think we all still use some of the same flash and designs you see on a wall as inspiration. Those images are timeless and make really nice tattoos. We all have our own twist or idea on how a design should be tattooed to make it our own. 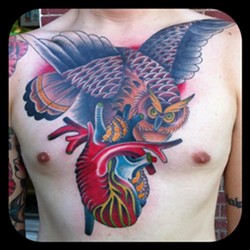 Gavin: What eventually led to the closing of the shop, and when did the idea come about for you to form a brand-new shop?

YRT: Our lease was ending at Eleventh Street and our landlord was a huge pain in the ass, so we decided to look for a new building. While we were planning the move, some of us wanted to start in Sugar House and some wanted to move back to the downtown area. And as simple as that, Yellow Rose and Cathedral were formed.

Gavin: What made you decide to relocate to Sugar House, and how did you come across the location on 900 East?

YRT: We just looked for spots close to Eleventh Street to minimize the move. We came across a great spot two blocks down from the old shop and jumped on it.

Gavin: What was it like for you getting the shop set up and functional, and what issues did you have to deal with? And where did the new name come from?

YRT: Jon spent a lot of his days off at the new shop getting it ready and up to par to tattoo in. We would all come down after or before work and help out with what we could. All in all, everything went pretty smoothly. The name Yellow Rose came from the symbol of friendship. Jon's wife, Sara, came up with the idea to name it that.

Gavin: Aside from a couple of artists, you kept most of the staff together from the old shop. What kind of a challenge was that to keep the group around and not have everyone leave for other shops?

YRT: We all feed off each other and enjoy working together, so it just seemed natural to keep that train moving. Dance with the girl you came with.

Gavin: You opened up the new shop in the fall of 2010. What was the general reaction from the public, and how did old clientele take to the move and new digs?

YRT: After the move, it took a little while for everyone to find where we moved, but after six months it was like nothing changed. We think that we have had nothing but positive feedback on the new location.

Gavin: Along with the move, you brought on new artists like Cody Collins. How was it bringing him on board and helping out younger talent?

YRT: It was great bringing in someone outside of Utah. Everyone has different ideas and thoughts on tattooing.

Gavin: Are there any plans for you to expand, or are you looking to keep things as they are for a while?

YRT: We would love to keep things the way they are.

Gavin: Going local for a bit, what are your thoughts on our tattoo shops, both good and bad?

YRT: We know the guys down at Cathedral Tattoo are putting out solid tattoos.

Gavin: Is there anything you wish would change or think could be done better?

YRT: Everything, all the time. If you don't try to constantly improve, you become stale and get passed by. We think it's important to always work at improving your art, skills and service ability.

Gavin: Who are some other tattoo artists whose artwork you've enjoyed checking out?

YRT: There are really too many artists to name. But a reality show is no way to gauge how good a tattoo artist is. Locally, Jake Miller has always created solid tattoos.

Gavin: What can we expect from both Yellow Rose and yourselves over the rest of the year?