Tomorrow night, the Utah music scene gets a hefty boost in recognition as we see the launch a formal awards show, created by and for local performers in a very specific field. --- The first annual Utah Underground Hip Hop Awards will take place this Wednesday, May 16, at Brewvies Cinema Pub, honoring local musicians and performers from across the Wasatch Front for the work they've done in keeping the genre alive and thriving in the state. The three-hour evening will be hosted by comedian Jay Whittaker with DJ Celly Cell holding down the music all night long, featuring performances from Blox, E William, Hi Def, B-Side, Miss Mindy and Wiseguy sprinkled throughout the awards. With just one day left until the ceremony kicks off, we chat with the two founders behind the awards about their efforts to make it happen and their thoughts on local music.

Gavin: Hey, guys. First thing, tell us a little bit about yourselves.

Lance: My name is Lance-A-Million, I'm from Rose Park in SLC, I've been doing Utah hip hop since 1999 and have been touring all over country thanks to SLC hip hop. And my partner goes by record producer P-Midus and he's been a fixture in Utah hip hop since '96.

Gavin: How did you both become interested in music, and what were some early influences on you both?

Lance: Well, I was born into a musical family, my dad was with Motown Records in the '80s, so you could say it's in my blood, you!

P-Midus: I'd have to say the same. It's in the bloodline from my father to my great cousin, legendary trumpet player Dizzy Gillespie.

Gavin: What was it like for both of you breaking into the local music scene and helping the genre out both onstage and behind the scenes?

Lance: In junior high, I started recording everybody that was interested in doing music; this was off a li'l 4-track tape recorder my dad had gave me, so it was on and popping. I found my sound and market quick .I had a group called Love & Murder; we used to do battle of bands and ranked high, so with us winning with our hip-hop we started to grow, connecting with all major Salt Lake artists -- it was beautiful, rest is history.

P-Midus: I came up under producer aCe Santiago, and the crew was called crooked world and fueled great artists such as Ebay Jamil and many more. We worked closely with very hip-hop community-oriented stations that have supported local music -- shout out to KRCL 90.9, they've always held us down. I've been blessed to be part of Utah's largest hip-hop stage productions, touring north to south, performing with well-known recording artist Jutbox and opening for many of the artists that have come to our state.

Gavin: When did the two of you first meet each other and become friends?

Lance: I first met P-Midus through a friend named Calico; I went to do a feature record at his studio and just clicked. Still to this day haven’t worked with any producer with his talent and skill in and out the booth.

P-Midus: Yeah, I recall that day. Met the kid, verses were ready, couple of takes -- that was that. He's remained a good friend of mine and one of the most well-rounded recording artists I’ve worked with.

Gavin: How did the idea come about to put together an awards show for local hip-hop artists, and how did you decide on the name?

Lance: This is years of planning man -- no overnight success about it. It was just time for Utah artists to get the recognition they deserve. A lot of talent out here and just felt it was time to start rewarding.

P-Midus: Lance dropped the concept on me and I was instantly hooked. I'd recently been in search of ways to give back and knew off top that this was the calling.

Gavin: Award shows, especially for music, always seem to be very complicated in the planning stages. How did you decide on what kind of awards to give out, and what was the criteria for people being eligible?

Lance: First of all, we've thrown shows forever, so finding the right performers and calling out on DJ Celly Cell as the people's choice was a no-brainier.

P-Midus: But don't get it twisted -- coming up with the categories and the qualifications that fit the criteria was a lengthy process that required a lot of revisions and going back to.

Lance: The design of the physical award itself was important to me and was time-consuming to the final approval.

P-Midus: Everything, from the shape to the weight to its multidimensional feel in the palm, these awards were inspired by dreamers of success by means of Utah hip-hop.

Gavin: Without going into a lot of the specifics, what was the process like in collecting nominees and judging the winners for all the categories?

Lance: It started with online voting complete with open enrollment for all. While we knew the number of individuals making hip-hop music in Utah could be infinite, we started with an initial roster of active nominees who were all currently buzzing due to their last year's worth of grind, which was easy to list off the top.

P-Midus: Agree. The ability for all to add nominees has been key in ensuring equal opportunity and balanced business in the polls. We went with the people's-choice approach the first two rounds to allow each and everybody a voice that would be heard. The final winner for each round was determined by total votes and comments from first and second rounds coupled with the appropriate consideration of 2011's efforts measured in number of releases, quality, response and buzz factor.

Gavin: For those who may be interested, what do the winners receive from these awards, and what kind of recognition do you hope they receive, as well as yourselves?

Lance: They win the award, the street credit, the fan in everyone who followed these awards.

P-Midus: Which is where every nominee has already won. This event was Utah's most highest followed hip-hop event, tallying over 1,000 fans on its page within weeks of going public.

Lance: We just want to be known as a firm quality-music industry outlet.

P-Midus: Definitely. We just wanted to shine the light on everybody doing things out here, and I’m grateful for our success in that goal.

Gavin: What kind of a challenge was it putting together a good representation of the scene to perform at the show, and who have you got lined up to play throughout the evening?

Lance: We selected something for everybody and feel that we spanned the spectrum of hip-hop.

Gavin: What made you decide on Brewvies as the main place for the event, and how has it been working with them to put it all together?

Lance: Bottles!!! This is a grown up celebration, complete with the works.

P-Midus: Oh, it's gonna be a lot of cheers and rounds going around for everybody.

Lance: Plus, we as artists have never seen ourselves projected on such a large level as the silver screen that will be presenting each of us.

Gavin: What are your thoughts going into the show, and what do you hope to achieve with the awards?

P-Midus: A sense of pride in our hip-hop community and something tangible to reach for other than a gun.

Lance: Longevity and a solid platform to build upon for the entire state of Utah.

Gavin: Moving on to local music, what are your thoughts on the local scene, both good and bad?

Lance: I love SLC music, it sounds like nothing else. I love everything about it. I see every artist out here willing to step outside the box and create something new for the sake of claiming it as "homegrown."

P-Midus: Most Utah DJ's and promoters don't support locals and the radio stations are even worse about it. Man, it's been my greatest privilege to work so closely side by side with everybody I’ve had the opportunity to work with, and I hope to be a big part of it all when an artist from Utah finally gets to experience success on a mainstream commercial scale and these people don’t have a choice but to promote the music.

Lance: PELL killed the game last year, Kis Barber is a top competitor in my mind.

P-Midus: CVG's Die Higher sits with the crown on my list, BLOX's S.N.F.H. played on repeat on its playlist, but I'd say Lance-A-Million's AvaLance carried the most authentic flavor, in my opinion.

Gavin: What's your opinion on the current airplay on community radio and how it affects local rap and hip-hop?

Lance: I think it's beautiful. As long as there's a will, there's a way. I remember back when I was up and coming, they used to actually let us perform on air at KRCL. It's a lot of politics involved in local radio play with the stations these days.

P-Midus: The lack of support is heavy but the substance in quality is light so I guess it tends to balance out.

Gavin: With so many sources out there to get music off the Web, both for publicity and sharing, what are your thoughts on putting out free tracks for anyone to listen to?

Lance: I'm game, I like it, its cool 'cause back in the day there was never a MySpace or YouTube or Facebook, so I'm with it.

P-Midus: Yeah, today's social-media-networking capabilities have made it possible for anyone who has ever thought they could make fire music to be heard. I have no regrets that this never existed prior and look forward to the new means of music promotion to come in the near future.

Gavin: After the awards, what can we expect from both of you over the rest of this year?

Lance: More quality events, projects after projects musically and more opportunities for people to get involved.

P-Midus: Expect some of the freshest music you've heard from our state to pass through my hands with new material to be released by Emerson Kennedy, BLOX, CVG, Grap3z,Tay Krew and Odd One, to name a few on the hip-hop side, and new R&B records from E William, LaMillz and new female vocalist Samie Saya. 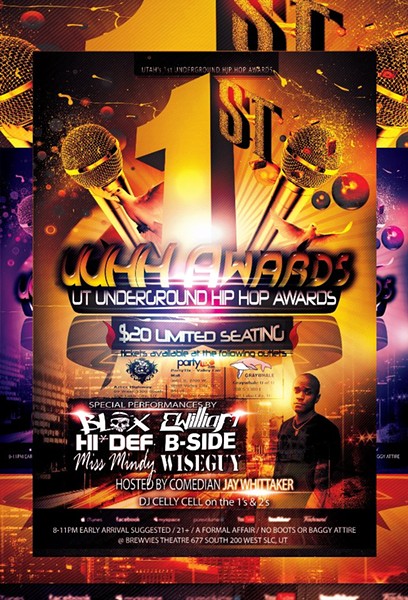 Lance: God and the family first. Stay tuned to the network, keep supporting anything Utah and all things hip-hop. Keep me in mind.

P-Midus: Shout out to the provider of many of my major opportunities, Chris Le and the whole Grand Forte family. Shout out to my team The Young Star Life and to everybody in Utah for giving me something to be proud of every time I look around.