Hello to all you spring-roll-munching, hummus-nibbling, taco-crunching, catfish-gnawing, gyro-handling, meatball-cutting, how-many-nationalities-can-you-fit-into-your-belly enthusiasts! --- I haven't made my way there yet, but every year, the Living Traditions Festival usually brings in a strong group of eaters who live to “tour the world,” if you will, and get something of everything before the day is done. I'm not one, nor would I try to be, but it is interesting to watch as I'm sure I'll see at least one person later today try it. In lieu of a 337 Wall update, here's some random art from the walls of the Urban Lounge men's room.

Today, I was going to kick things off with some fundraising help, as the duo behind Grimmleighs (Rachel Kade & Leigh George Kade) have been transitioning into running their own business. They've been hard at work turning the old Cafe de Rico location on 800 South and 500 East into a vegan/vegetarian restaurant named Frisch. They've been seeking out funds the past month on Kickstarter, and today was to be the final day to contribute. But we're happy to report that the Kade's met their goal of $8,000 a few days ago! But if you'd still like to help the shop out by giving them money to get more improvements early, you can still contribute until Sunday afternoon. Go donate here and help out some local entrepeneurs pursue their dream.

We've got over a dozen events to discuss today, so let's kick it off with some material happening today and tonight. As we speak, the SLC Arts Hub is having its grand opening. What's the SLC Arts Hub, you say? The Utah Arts Alliance has been hard at work for nearly a year to bring an old warehouse at the end of 100 South and 663 West up from the ashes and into a viable artspace for the community. The place currently houses several of SLC's top talents along with a gallery and a ballroom, with some open space still left for people to move into. The grand opening happens tonight from 6-9 p.m. at the address above; go check it out!

Meanwhile, in Murray, 5 Monkeys will play host to the third Mountain West Showdown, presented by the Masters Alliance. Tonight, you'll see some of Utah's finest mic masters going head to head in a versus competition. Check out the list of performers on the poster below. If the talent on hand is any indication of the night to be had, this is gonna be one hell of a battle.

If that's not quite your style, Mr. Jesse Walker will be taking over W Lounge for another classy bash, as only Jesse can. Jetset Discotheque will showcase Walker along with DJ Knucklz to bring you the finest dance party in the city, complete with visuals projected around the club for you to enjoy while dancing your ass off. Just $5 tonight!

Skipping ahead into the week, Thursday will be the Meat & Potato Theatre debut of Aliens (A Puppet Musical). Just so there isn't any confusion, let's be very clear about what this is. This is the 1986 film Aliens, set as a musical, and performed with a mostly puppet cast.You know, I don't believe I need to add anything to that description. Go check out the show while you can, especially if you're a fan of the Alien series.

On Friday, grab your bike and head over to the Gallivan Center for the massive exodus of biking known as Critical Mass. The event is not a competition or race of any kind, it's simply an opportunity to get out and bike around the city with a few hundred of your fellow SLC bikers. Actually, the group is aiming to get over a thousand participants this month, seeing how May is “Bike Month” and all. Show the city some love and join the 3-5 mph tour of SLC. You can find more info at SaltCycle.org.

Next Saturday will be the third installment of the Hip Hop Roots SLC event, put on by Wasatch Renaissance and held at The Sugar Space. These events marry art and music together for people who truly appreciate and love the mediums, complete with live performances and demonstrations for all to check out. C-Crime, Dope FX, Chance Lewis, Phil Maggio, Ropepoet and Apt are some of the local names who will be on hand, along with others yet to be booked. Just $10 for an evening of art and music.

Next Sunday, the Geek Show Podcast will once again take over Brewvies Cinema Pub for its free movie night. This month, you'll wanna break out your old Power Glove and Sega Saturn controller for an evening of video-game movies, as the panel will be in full force to show 1993 bomb Super Mario Brothers and the 1994 classic failure Street Fighter. Yes, these films are crap, and pressing Up Up Down Down Left Right Left Right (B) (A) Select and Start with a Game Genie attached won't fix that, but at least you can heckle the film with your geekiest of friends. As always, the show is free, but the refreshments aren't.

Next Monday, the Salt City Indie Arts team will take over Mo's Bar and Grill for another night of poetry, only this time it's just for the girls as they compete for a world-qualifier position for the World Poetry Slam happening in Minneapolis next year. The five women guaranteed to perform this night are DeAnn Emett, Karlee Berezay, Lullabelle Ma'ilei, Rebeca Mae and Karen Christensen, with more on the waiting list to be randomly drawn. The event kicks off at 8 p.m. for just $5; this will be an interesting competition to watch.

Next Tuesday, Club Metro plays host to the next Dr. Sketchy's Anti Art School. This month, they've managed to open the gates to Hades and bring out the sexiest demons and temptresses you'll ever sketch as the theme for May is “Out Of Hell.” Bring your finest drawing supplies and be prepared to enter the ninth circle of creativity with the demonic ladies of the night. 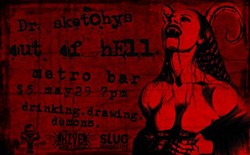 Moving along to Thursday, May 31, there's a little event you may have read about all along the walls here -- the 2012 Miss City Weekly Pride Pageant. I really don't need to write much else on this; if you click one of the banners, you'll get all the details you'll need without me trying to melt it down to a paragraph. I just thought I'd remind you that it's there and you should join us at The Hotel/Club Elevate at 8 p.m.

If you're more into comedy, you're in luck, as the second annual Salt Lake Comedy Festival will kick off that Thursday, as well. Last year, the event was a major success, earning press all around for its innovative approaches to having a festival in a town not normally known as a performance destination for stand-up. The festival even picked up an Art and a Best Of Utah award from CWover the past year. For complete details on this year's events and tickets, check out its website!

Friday, June 1, have a lot of events to get to. The first and biggest is the 2012 Utah Pride Festival. You're going to read a lot more about this here and probably several other stories going into the event, so this is simply a reminder for now that the festival is less than two weeks away. Hope to see you at the parade ...

There are other events happening that same night, the first being the Who Likes Short Shorts? Film Festival. Expanded to two days, the festival is essentially locally made films made within a certain timeframe. I covered the festival for this blog when it was starting to get off the ground, and since then, it has grown to two days with panel discussions and its own “Best Of” showings. If you're a local film buff, this is an evening you'll want to attend. The event kicks off on June 1 at the Post Theater at Fort Douglas; hit up its website for ticketing information.

For those of you down in Utah County, you're in for an awesome treat, as the next installment of the Rooftop Concert Series takes over the parking terrace of the Provo Towne Square for one of the hottest shows they'll have in 2012. The extremely popular group The Moth & The Flame will join seasoned indie rockers Desert Noises for an evening of rock. Knowing both bands, there's bound to be a couple of surprises throughout the evening. Seating starts at 7:30 p.m., with music starting at 8 p.m. And remember, it is completely free!

And to wrap up the two weeks, for you cyclists looking for an evening of fun that isn't crowded, Bike Prom returns on Saturday, June 2. The SLC Bike Collective will present an evening of riding with your sweetie, starting at Liberty Park at 6:30 p.m., where you'll ride to the undisclosed location for an evening of dancing. Wanna join? $20 gets you into the prom; more details to be found at BikeProm.com.

As for the blog: The next couple of weeks will be interesting, as we recap this month's Gallery Stroll, bring you band interviews from a two-day fundraiser, chat with the creator of an online comic, visit the latest arcade making waves in town, visit with an artist from Clinton and ramp up to Pride with one of the state's most influential and helpful clubs. At least, that's the plan; as always, we'll see what happens.