The past week has been a disaster for Utah-Idaho relations. Last week saw Wasatch Roller Derby’s Midnight Terror and Bonneville Bone Crushers shut down the A and B teams of the Treasure Valley Rollers of Boise, Idaho. ---Then there was news of the Idaho State Liquor Commission outlawing Five Wives Vodka, produced at Ogden’s Own Distillery.

But if mending fences were on the minds of Wasatch Roller Derby’s Bonneville Bone Crushers, Saturday, June 2, it didn’t show. Once again, the BBC showed an Idaho team what roller derby is about in our lovely State of Deseret.

This past Saturday, the ladies of BBC hosted the Portneuf Valley Bruisers of Pocatello, Idaho at the Derby Depot in SLC.

The bout started a little rough for both teams, as each saw a number of players  sent to the box. The Bone Crushers managed to strike early, though, and set the momentum for the rest of the night. By halftime, the BBC were up 111 to the Bruisers’ 11.

The BBC pack held strong by relentlessly pinning and clobbering each jammer Portneuf sent through, then quickly resetting and doing it all over again. The blockers were able to hold the Bruisers scoreless for the first 10 minutes of the second half. That astounding pack work made things easier for the jammers who piled points on the board all night.

With a final score of 215 to 23, the Bone Crushers showed once again that even Wasatch’s B team is a force in derby in the West. And while the victory was a team effort, the night belonged to Bonneville’s Vishus Trollop, who jammed her way through multiple high-scoring runs and ended up scoring nearly a third of all the Bone Crushers points.

Don’t miss the chance to see your favorite Wasatch Derby girls fight it out this Saturday, June 9, at the Derby Depot (1415 S. 700 West) as the home teams vie for dominance. Will the Black Diamond Divas continue their reign, or will the Hot Wheelers turn the table on this bitter rivalry? Be there Saturday night at 7 p.m. and see for yourself! Tickets and info: WasatchRollerDerby.com. Full local derby bouts schedule here: Utah Roller Derby 2012. 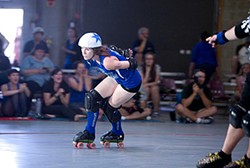