“Here I am, drawing pictures of naked ladies again,” I thought to myself as I sketched a crude shape that almost looked human. To be honest, I haven't drawn anything in years. But there's something about drinking and drawing that will always be a winning combination.--- A few weeks ago, I discovered that the Metro Bar hosts an art event featuring live models dressed in themed costumes ranging from Betty Page, she-devils and trailer trash. Let’s just say I was drawn in like a moth to a naked-lady flame.

It’s called Doctor Sketchy’s Anti-Art School, a monthly event where artistic barflies can pay $5 for the opportunity to socialize with other artists and draw models in an unstuffy environment. The first Dr. Sketchy's event started out in Williamsburg, New York, in 2005, and has since grown into a global franchise with schools in over 100 countries. Technically, it’s a competition of sorts. People vote anonymously on the best pieces and there are prizes to be won. But I'd say it's more of a show than anything. As I looked around the room, there were a few guys who barely lifted their pencils. I realized this might have something to do the burlesque dancers ... 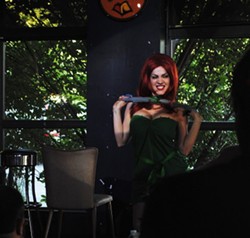 The evening is hosted by Maggie Zukowski, an artist, bartender and local organizer for Dr. Sketchy. Calling this event the “Anti-Art School” is more than appropriate. There's no lesson's involved and no one really cares if you draw like this guy. Zukowski points out that Dr. Sketchy’s isn’t just a competition about skill. “There’s some great artists here who can definitely draw, but sometimes creative and funny pictures have a chance at winning, too.”


You should know that since I was a Colin Wolf pup, I've gripped pencils as if I wanted to murder paper. So, when Zukowski pointed out that I had a remote chance at victory, I decided to stick around. There were about 30 or so people participating and I was by far the shittiest artist in the room. But as I’ve said before, alcohol makes everything fun, even canoeing. So, the following photos are what happens when you combine, tequila, beer and models … I make no apologies.

This was my first drawing of the evening. I went for a minimal sketch look while using a ball point pen. I'm happy with the "After School Special" outcome. 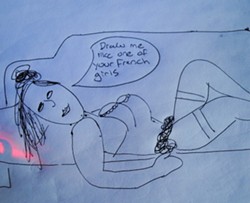 I think I captured her intensity in this picture. The mitten hand symbolizes her struggle in an cold post-modern world. 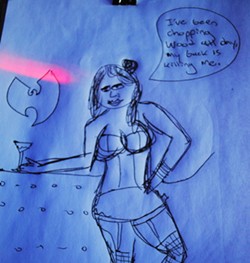 This picture hurts my eyes. Note the  Wu-Tang sign to the left. Also, I have no idea why she is saying that she's been chopping wood all day. It probably symbolizes something very important. 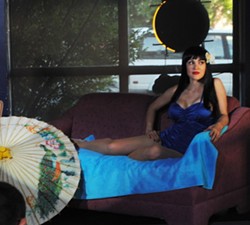 I had to leave after drawing this picture, for obvious reasons.

Admittedly, whenever I drink too much I have to vacate the premises immediately, so I don't know if I won anything that evening. Probably not, though; I can't draw. But that doesn't mean I wouldn't do Dr. Sketchy's Anti-Art School again -- I would. Next time, I'll come prepared.

Check into Dr. Sketchy's local Facebook page for info on its next event.