As a recent EDM convert, Kaskade was an easy name to stumble upon when researching techno gods like DeadMau5 and Skrillex, both of whom have collaborated with the chart-topping DJ. Sailing into Billboard’s Top 10 with his most recent album, Fire & Ice, released in 2011, Kaskade aka Ryan Raddon is undeniably one of the biggest names in electronic dance music.

In between reigning over thousands of fans at the Staples Stadium in Los Angeles -- the first EDM DJ to solo headline there --Kaskade packed up his entire LA production crew and headed to Utah to hit the humble A-lister club, Park City Live.

The nightclub was well over capacity on Tuesday night, overselling the show by 150 tickets. PCL really didn’t care who you knew -- if your name wasn’t on the list or you didn’t have a ticket, you could take a hike. Inside, scantily dressed go-go dancers were littered inbetween the youthful audience moving and shaking to every song that came on. 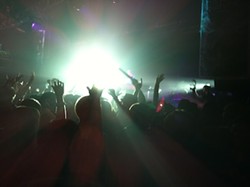 Kaskade wasted no time doing what he does best and opened strong with “Eyes,” getting everyone in the house pushing together to bob their heads and pump their fists. Other hits like “Turn It Down” and “Move For Me” made an appearance in the show, playing to colorful live laser shows and a lighted backscreen that displayed everything from fireworks and geometric shapes to moody clouds.

Sticking to his signature sound of progressive and electro house dance music, Kaskade would have periods of calm, trance-like beats before a seamless build to crowd-bumping drops. Kaskade mixed songs with the prowess of over a decade of experience, creating smooth transitions and blending songs in an ABAB CDCD pattern, using the buildup of one song to drop into another, creating nonstop dance action.

Minor dubstep influences were also revealed in the middle of the two-hour set, but only briefly. The crowd cheered “woot woot” with the music, egging on Kaskade even more.

The great thing about Kaskade is how natural and pleasurable DJing is for him. A look of ecstasy undeniably overtook Kaskade’s face every time the beat dropped and he sang along with each melodic female vocal chorus that played, a signature sound for the DJ. There were no gimmicks, just Kaskade and his rolled-up jeans, low-top Converse and pure talent.

“Angle On My Shoulder,” Kaskade’s most recent radio hit, followed the ABAB pattern, being blended with other songs before dropping into Skrillex’s “Lick It,” undeniably one of the highest points of the show.

Kaskade ended with his mix of “I Remember” with DeadMau5, closing by saying “It’s good to be back here,” and taking a picture of the excited audience that was littered with fog, giant balloons, confetti and plenty of sweat throughout the show.

If you weren’t a Kaskade fan walking into the club that evening, you became another convert by the end of the show.