SB Dance had a hell of a run last season, which included its successful WTF! showcase and Of Meat & Marrow, which recently took place over the summer. --- The experimental dance company best known for taking daring conceptual risks with its performances had one of its best years to date during the last seasonal run, and before it kicks off a brand-new season later this year, there will be a bit of conversation.

Cultural Confidential will be a panel discussion held at the Rose Wagner tomorrow night, with a team of creative bodies from the Utah art scene set talking about “Creativity & Control In The Info Age.” Today, I chat again with the company's namesake founder, Stephen Brown, this time without benefit of full access to a liquor cabinet, about the evening and the upcoming season.

Gavin: Hey, Stephen. First off, how have you been since we last chatted one on one?

Stephen: Dude, the image of you and that hamster is burned into my retina. I am never buying you a drink again.

Gavin: Technically, you didn't buy; I just raided the company's bar. Getting right to it, how did the idea behind Cultural Confidential come about?

Stephen: Our last performance of Of Meat and Marrow was a Sunday matinee in June. Afterward, I'm loading up my van, which is parked at a dock on 300 S. A hipster couple walks by, looks at the stuff I'm loading -- meat hooks, gas masks, metal objects -- and asks what it's for. I tell them about the show. They're newcomers and bummed about missing it. The chick says, "We always hear about cool events, BUT AFTER they're done! What's wrong with this place?" I think she hit the nail on the head. Salt Lake isn't a cultural wasteland, it's just a super-balkanized cultural community split into different disciplines, districts, and demographics. You gotta know where to look and know what to look for. The idea behind Cultural Confidential is to bring together people who are interested in contemporary culture -- technology people, artists, university students and faculty. I'm hoping that it becomes something other groups can buy into, that they host a Cultural Confidential or even organize one. Because we need events like this to sew together our balkanized community. It used to happen in big open-air cafes or arts centers. We don't have those here. 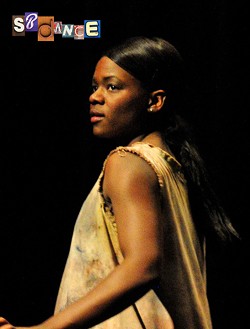 Gavin: Primarily being a dance company, did you feel it was at all odd creating a program like this, or was it more of a matter that you wanted to expand the programming?

Stephen: What makes SB Dance distinct is that we are primarily boutique manufacturers of art. SB Dance doesn't commission scripts or hire guest choreographers or restage classics – all wonderful endeavors, but not our gig. SB Dance's center of gravity is creation. Cultural Confidential is about making art, consuming it, sharing it and making meaning with it. So, I think SB Dance is a natch to present this kind of a program. Who else has that mission?

Gavin: Considering the kind of programming you normally have, what made you decide to do it in the Blackbox Theatre for such a cheap ticket price?

Stephen: Call it a special introductory offer. It's an experiment. It'll be way more expensive after HBO picks it up.

Gavin: What inspired this first topic of Creativity & Control, and what made you take on the points made Larry Lessig and Jack Valenti for the two topic positions?

Stephen: I'm old enough that I can remember what it was like to be an artist before the Internet reached critical mass. As it has for many artists, the new technology has revolutionized my creative life. It is hugely inspiring to witness the success of open-source communities like Linux or Drupal. Those models make me think that we're just beginning to tap the Internet's ability to close the gap between artist and audience. But lots of people -- lots of business models -- resist change. This is what Lessig and Valenti were discussing.

Gavin: What made you decide to have a panel discussion rather than bringing in a single guest or two people to debate the matter?

Stephen: It's much richer than a debate of corporate rights vs. individual freedoms or open-source versus proprietary. It's about how the new technology affords certain kinds of interactions and kills off others and continues to evolve. It's about cultural responses that might not be logical at all. So, we'll be talking fan fiction, news blogs, stealing and repurposing imagery, music careers, story rights and more. The point is to understand the ecosystem rather than get into right versus wrong.

Gavin: How did you go about choosing the panelists, and whom do you have on board to discuss these topics?

Stephen: I just started asking around and found an amazing group of specialists who I'll describe in no particular order. Anne Jamison is an English prof at the U and she is an expert on fan fiction, a genre of writing whose development mirrors the evolution of the Internet. Senior Curator at the Utah Museum of Contemporary Art -- UMOCA -- Aaron Moulton is a brilliant mind who explains why images might and should be repurposed. Stacey Richards is a music-industry professional highly concerned with artists getting paid for their work. Commercial photographer Josh Blumental is exploring new techniques and business models to own and sell his work. Software developer Jason Hill is a vocal advocate for open source but also uses proprietary systems when they're appropriate. Debora Threedy is a law professor and playwright who is sensitive to the line between plagiarism and inspiration. And journalist and longtime newspaperman Glen Warchol has seen the news arena turned on its head.

Stephen: I moderate because I'm the tallest. These are all smart people, though not as tall as I am. My job is to stand up straight, see where everyone is and get out of their way.

Gavin: Considering the seven people who are on the panel, what kind of a conversation are you expecting to have, and how spirited are you allowing things to go?

Stephen: Everyone has a really interesting story to tell and they're all very passionate people. I fully expect a fight to break out.

Gavin: What are you hoping people will take from this kind of show?

Stephen: I'm hoping folks make new connections. Perhaps that means seeing a side of an issue they didn't before. Maybe it means growing an appreciation for the local cultural community. Maybe meet a nice girl or boy. SB Dance Central Command maintains an open mind.

Gavin: For those who can't make it, will you be recording this show or providing it to the public in some format?

Stephen: Yes, we will. The audience will ask questions, too. They'll shape the show. It's very much a participatory event.

Gavin: Are there any plans for future panels at this point, or are you kind of playing it by ear at the moment?

Stephen: I'd like to do another one this spring. It might be at a different location. Your place?

Gavin: Sure ... you don't mind making it super-exclusive to five people, right?