The Utah State Fair had its last hurrah Sept. 16 and if you missed it, well, you skipped what was quite possibly the most classic people-watching event of the summer. ---So, in an effort to showcase all the reasons you should’ve dragged your ass out there (without artsy photos of time-lapsed carousels), I've compiled 6 days of the best fair-footy possible. Bonus: Since The Salt Lake Tribune inspired me with its recent questionable paparazzi pic, I threw in a few "could be" celebrity spottings, as well. Enjoy.

1. Guy who may or may not be Stephen King wearing a country fedora. 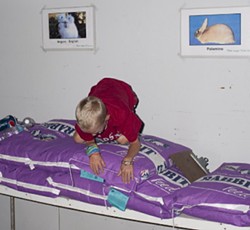 4. Woman confused by corn. “This is the shittiest burrito I’ve ever had.”

5. Lindsay Lohan sightings. This was minutes before she slammed some guy with her Beamer.

6. Inflatable ass mannequins. Because this is how people will see you when you wear these pants.

7. A mural that punishes all murals. I want this made into a tank top and then I want the tank top tattooed to my chest.

8. Kid Rock crushing a beer. Based on Tribune logic, it has to be him.

9. This. The best way to let people know you're a fister is with an informative T-shirt.

10. Rubeus Hagrid. He's some guy from a book about wizards.

11. Derby drivers screaming, “Are you not entertained?”

12. The smallest penis in the valley.

13. The biggest penis in the valley.

15. Steven Spielberg. Hell, he may or may not have been there.