Last Friday, I made my way out onto Gallery Stroll, the first of the fall and probably the last of the clear-weather versions of the year. --- Surprisingly, this month was pretty well attended, with the avenue areas getting much of the attention; a little bit of a trend to keep an eye on, as there's been a slow shift to gallery showings happening in the northeast section of the city. But much of the real show was still in the heart of downtown.

For this month's Stroll, I made my way over to Nox Contemporary, where Thomas Aaron was showing off his latest works, both in small forms in the lobby and large portraits in the big room, along with some tasty catering from Vivace. Today, I chat with Aaron about his work and the process behind it, his exhibition at Nox, thoughts on the art scene and a few other topics -- all with photos I snapped during the event for you to check out in this gallery here.

Gavin: Hey, Thomas. First thing, tell us a bit about yourself.

Thomas: I’m from Ogden, I have a wife and a three-year-old. I’ve lived in the West my whole life. I spent my formative years running around the mountains of Utah while living in the suburbs. So, I’ve spent a lot of time straddling the interface of relatively wild lands and the controlled human environment. I remember miserable August days hiking through cheatgrass-covered foothills and transcendent mornings on ski slopes, early morning drives across the salt flats and sleeping under 100-foot Engelmann spruce in alpine gardens. The setting and environment of Utah had a strong influence on me. I am not saying it was all an affirmative experience. The other day, I spent an afternoon walking through a dry creek bed under the husks of half-dead cottonwoods. The smell of those trees combined with the haze of dust off the ground is both nostalgic and repulsive.

Thomas: I think I just grew up in the stew. My mom exposed me to art and artists as I was growing up. My deepest art memories (and I have no idea how I got these) are of seeing work by the abstract expressionists. That became the work against which everything has been examined throughout my life. But at the time I was growing up, their work was basically the establishment. Pop and graffiti art was in full swing, so they had some sway on my vision. Kline, Gorky, Motherwell, Gottlieb followed by Diebenkorn and Basquiat are just some of my earliest influences.

Gavin: Your received your degree in fine art from the University of Utah in 2004. What made you choose the U, and what was your experience like in its program?

Thomas: My wife had a good job at the time that kept us here in Utah so the U was the only option to explore art the way I wanted to. The art department was in the middle of an identity crisis, as the old guard had left and a new direction was still being formulated. While overall it was a good experience, it left me irritated and disillusioned at times as I struggled to come up to speed with what was going on there. In the end, I feel like I just floated through. I didn’t get to know the most influential instructors/professors at the time. I just did my work and didn’t really take much advantage of the knowledge pool. I tend not to engage with others unless provoked. That is a disability in the higher ed environment. Internally, however, I experienced a sea change in my thinking that led to my current work. That is what school is for – to get you to learn how to think.

Gavin: During that time, what got you interested in painting and mixed-media works?

Thomas: I was always interested in painting and drawing. I had studied commercial photography at Salt Lake Community College before attending the U. I love photography but realized that my naive dream of being a photographer as my day job and painting at night wasn’t going to work. If you dedicate yourself to photography – especially commercial photography – you need to go all in mentally. Photography becomes the frame of reference for seeing. I couldn’t bifurcate myself. Painting felt like the only option, although one professor at the U almost had me convinced to move to sculpture intermedia.

Gavin: What was it like for you first breaking out onto the art scene after college, and what were your impressions of the SLC scene at that time?

Thomas: I love hiking. When I hike, I have a pace that I have found that works. My legs and body just move best at a fairly quick speed and I can just keep going and going. Internally, I move at a different pace. My mind just keeps working, but unlike hiking, it goes slow – plodding. I spent a long time after I left school in a personal program comparable to an MFA program. I tore through my ideas one by one and forced myself to defend them – most failed. I read and researched, and while I made work at that time, I did a lot more thinking. I joined a discussion group of artists and art professionals to explore ideas and get input. I didn’t really pay much attention to what was happening in SLC. It was a selfish time. I found new influences and new ways of framing my motivations. Once I had developed a direction, formulated concrete ideas, and developed a painting language I was satisfied with, I started making my work and engaging in the community. 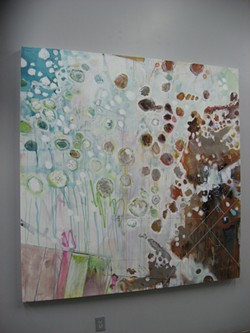 Gavin: I've read you use a Public Land Survey System system as a way to start creating your works. How did you come across that and how do you incorporate it into your work?

Thomas: The PLSS is the cadastral method used to divide up land west of the Mississippi into townships (six mile by six mile squares). Townships are further divided into sections (one mile square) and so on. This grid established a paradigm in the minds of the people who came here to claim their piece of America. It created a way to conceptualize, divide, and control and, by extension, commoditize the land. Fences and roads are often laid out on the section lines of the grid. Some divisions of the grid space were cultivated and other sections were left untouched. Fence lines and roads are barriers to livestock, and even native herd animals. Grazing takes place on one side of a fence and not the other, affecting the mix of vegetation. Before long, the flora of certain areas begins to conform to the grid. Salt Lake City itself conformed rigorously to the original survey plat because it was a planned city and didn’t grow up naturally. The grid is visually obvious in the aerial views of the Midwest, where all the land is cultivated. But here in this slowly changing arid land, it’s tenuous and fleeting. The palimpsest of humanity is subtle, but it’s all here, layer on layer. There are few places that don’t bear the signs of our interruption, from trails to farms to nuclear testing sites.

Gavin: Considering that part of your work is based around landscapes, do you consider this a form of landscape art, or do you believe that what you've created is so far removed from it that it has no impact? 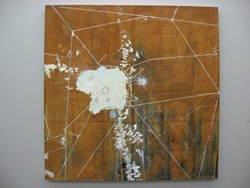 Gavin: What's the process like for you in creating a new piece, from concept to completed work?

Thomas: I wish I could answer that question in a way that wouldn’t take hours to explain. Let me just say it is almost 50/50 intuition and careful planning.

Gavin: Considering the process behind your works, how much do you play around with the design before finishing it?

Thomas: That is where the intuition comes in. The planning happens first, then there is the time spent making and that is where I have the right to do as I wish. Including scrapping all my plans.

Gavin: Tell us about the works you have on display for this month's Stroll.

Thomas: These are the first passages of a much larger proposition. The PLSS grid is obvious in most of the pieces but in many it is just as conceptual as the actual grid. It exists and underlies some of the decision-making but it isn’t obvious and sometimes isn’t visible. The show is called Land/Gaze because of this looking in a specifically focused way at land. I even got a small photo essay into the show.

Gavin: What are your thoughts on being displayed at Nox and working with them for this Stroll?

Thomas: I’m ecstatic to show at Nox. Few galleries have ever existed in Salt Lake that are bold enough to do the things Nox has already done. They dedicated a month to performance art. Outside of the institutions that have public money, grants and endowments, who does that? 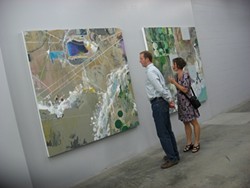 Gavin: Moving on to local art, what are your thoughts on our art scene, both good and bad?

Thomas: This is the subject of a much longer discussion but ... we have a great scene, an interesting variety of people engaged in the arts, some nice galleries and institutions and way-too-small a population to ever come close to great scenes in other cities. We need to get the good things that are happening out to a much broader audience, not just here in Utah.

Gavin: Is there anything you believe could be done to make things more prominent?

Thomas: All I have is the mental energy to do is keep painting. I will let smarter people than I am worry about how.

Gavin: What's your opinion on Gallery Stroll today and the work being displayed each month?

Thomas: Not every show can be mind-blowing. I am glad people just keep moving along. Like I said, I am a plodder. Just keep moving, and as we grow, so will the quality of any given show. Truth is, I have seen some very intimidating, thoughtful and compelling work while out on the stroll.

Thomas: I will be focusing on my family and my national presence.

Thomas: If anyone thinks they are a great supporter of the arts but doesn’t part with their money to support i,t they really aren’t doing much. Find ways to buy from and support local artists and galleries. I would hate to see some of the most progressive galleries close their doors. We just lost House Gallery; let's not lose anymore. Check out my website to see my latest work and old stuff, too.