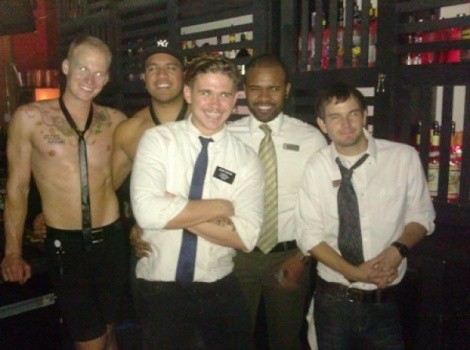 It's LDS General Conference weekend -- and you know what that means: Salt Lake City's gay clubs will be packed to overflowing. Or will they? ---

For years, I've been hearing from various sources that every Conference weekend is a bonanza for Salt Lake City's gay bars. The conventional wisdom holds that, as tens of thousands of LDS faithful descend semiannually upon Temple Square, a certain percentage of curious and/or closeted Mormon men take the opportunity to explore their darkest instincts in the fleshpots of SLC.

(It should be noted that these dark fleshpots exist mainly in the feverish imaginations of closeted small-towners; Salt Lake City's gay bars are generally cheerful, modern, well-lit and friendly establishments. Heck, these days, you can't even smoke indoors!)

Now, I'm a skeptic. Just because everybody says the bars are packed to overflowing during General Conference doesn't mean it's actually true. Several times over the years, I've tried to verify the Conference Effect. I've been to many gay bars on many weekends, sometimes even during Conference. But, even though I'm a trained observer, in this case, I must disqualify myself* as an accurate source.

Since my blind spot prevents me from making an accurate count, in the interest of science, I decided to call up a few experts to find out where all these Conference Mormons are going Saturday night.

My findings indicate that the Conference Effect could be a mere urban legend (according to a trustworthy source, radio personality/The Trapp bar owner, Joe Redburn). Still, some fashionable club owners (such as JAM's beefy and attractive Brian Morris) are witty enough to adopt Conference as a fun, special event. And still others (like Club Try-Angles' David Willeitner) report an extra bit of conviviality during this semi-annual occurrence.

Note: In the interest of inclusivity, I really did attempt to get the womyn's perspective, but was met only with a baffling voicemail message. I suppose I lack the secret code. Still, I encourage curious out-of-town helpmates to visit the Paper Moon, 3737 S. State, (801) 713-0678.

Brandon's Big Gay Blog: Are you expecting an extra-big crowd during Conference weekend?

JAM co-owner Brian Morris: We are -- it's one of our biggest nights of the year. Well, actually, it's semiannual, so we get a good crowd twice a year just from the LDS General Conference.

BBGB: Do you have any special drinks that you serve on Conference weekend?

Morris: No, we serve our regular drinks; nothing special. But all of our bartenders are dressed as Mormon missionaries. We call it the Missionary-Man Party, in honor of the Annie Lennox tune. Some [staff members] have their name badges that they wore on their missions, and we encourage people to do that.

In fact, [Sunday evening at 9 p.m.] is Conference Weekend Karaoke -- participants get a free gift card. We encourage people to sing LDS hymns, but nobody ever does. Occasionally, we'll get a primary song like "Give Said the Little Stream" or "Popcorn Popping on the Apricot Tree."

Trapp owner Joe Redburn: You know, that's an old wives' tale -- I remember hearing it years ago at Radio City. I don't think it's true, but I want it to be. I doubt anybody's sitting there in the Tabernacle thinking, "You know, after this, we should go to the bar!"

BBGB: Are you expecting an extra-large crowd tonight?

A Trapp shift manager who shall remain nameless: It'll probably be busy later, but the whole thing about bars being busy this weekend is sort of a joke. Who knows with them? They usually hang out in the parks. It used to be they'd go to the bathhouses, but we haven't had any of them for years.

BBGB: So you haven't noticed a lot of Mormons hanging around?

Manager: They don't come down here -- there's too much drinking, smoking and swearing.

Try-Angles assistant manager David Willeitner: I don't know if it's extra-big. We do usually experience higher volume the conference weekend -- and it's an extra-frisky crowd!

BBGB: Do you do anything special for Conference weekend?

Willeitner: We do very little to promote the event because it's a self-sustaining thing. Our usual crowd just bring their friends from out of town, so it becomes a larger extension of our already busy nights

* Unfortunately, asking me to count out-of-town Mormons in a gay bar is like asking a blind man to count black tiles in a 1930s checkerboard linoleum kitchen floor.

When it comes to smooth-shaven, shorthaired guys hanging out shamefully in the corners, I'm not such a good observer -- I simply don't see them. They're the ones who bullied me mercilessly in my youth. Maybe it's some weird kind of psychological defense mechanism, but today, I could be surrounded by a whole gaggle of cleancut RMs and never even know it -- I'd think I was alone in the room. Instead, I'm the one happily chatting up some burly, mean-looking, tattooed, bearded biker occupying the center of the barroom -- where I feel safe, where none of those hairless, judgmental, skinny, pious creeps would ever dare venture to shame me again.