Why You Shouldn't Bring Your Pet Goat To The Bar

Last night, Seattle native Steven Wescott was enjoying a beer at the Jackalope Lounge on State Street and the next thing he knew Salt Lake City Police were hauling off his goat.---  “I didn’t even know what was going on out there, to be honest. I went outside and my goat was being put into the back of a van.”

The 33-year-old is currently walking from Seattle’s Space Needle to Times Square in New York City with his pet goat Leroy. As fun as this sounds, he’s actually raising money for the Uzima Outreach and Intervention program, an orphanage in Kenya.

Yesterday afternoon, pictures of Wescott and Leroy strolling around downtown surfaced on Facebook and the social media website Reddit. Even Hoobastank spotted ‘em. But the pics that were getting the most attention were posted by Reddit user eaglebacon, who snapped a couple of gems of an anonymous girl passed out in front of the Jackalope Lounge surrounded by cops … and a goat.

Wescott claims the police confiscated the goat because they received a complaint that a goat was tied to a tree on State St. for four hours. “The goat comes everywhere with me. I park him out front everywhere I go, from here to Seattle. I’ve never had this problem before,” claimed Wescott. “Dogs are tied up to trees all day, and it’s fine for the goat. I don’t know. I’m mad because I felt I was getting the shaft. I wasn’t drunk and I know the cops have a job to do, but they didn’t answer any of my questions.”

Leroy spent the night at the Salt Lake City Animal Shelter and Wescott picked him up this morning after paying a $42 fee. “The sad thing is it was my mistake and I’m taking away from the kids,” said Wescott. “I like to hang out at scenester spots, but I guess with the goat it just doesn’t fit. I probably shouldn’t have kicked it at that spot.” 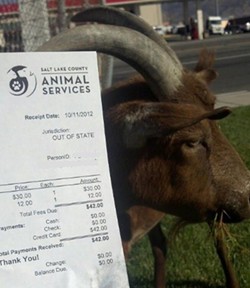 As for the drunk chick in the photo, she was taken to the hospital and treated for intoxication. No ticket was given. Wescott declined to identify “she who cannot hold her booze” and stated that he had just met the young lady a couple of days ago and that she was showing him around the city.

But the journey doesn’t stop for Wescott and Leroy. Tomorrow, they’ll continue south through Salt Lake City to Provo, where they’ll head east over the mountains. “I’m gonna try to go over those mountains. I’m not a mountain man but I’d like to see what I can do and see what I’m made of … and hey, I've got a goat.”

Wescott is hoping to raise $200,000 for the Uzima Outreach and Intervention Program. So far, he’s made $10,000. For more info on their journey and how to donate, check out Needle2Square.com