Hello to all you ear-splitting, black-hoodie-wearing, vinyl-loving, downtown-browsing, hard-rock-loving, filling-the-latest-venue-with-diehard-fans enthusiasts! --- I'll discuss much of this in a post next week, but last night, the true Salt Lake City music fans poured into Exchange Place with the opening of the new Shred Shed location and filled the joint to capacity! Truly an awesome moment for all those who were in attendance, and a real jolt to the music scene that we haven't seen in a few years. But, I'll discuss more of that this Wednesday. In lieu of a 337 Wall update, here's a picture of some of the awesome artwork you'll see inside the Shred Shed that speaks volumes.

At this point, the first few days of November are pretty dead, most likely due to Halloween hitting on a Wednesday, so I'm going to highlight a few things throughout October and then see what next month brings in two weeks. First up is one happening today for you alley-cat lovers. Clue Cat 2 will take place today starting at Velo City Bags, and all you'll need is $5, a pen, a bike and a love for pizza. Much like the game Clue, you'll take your bike and pedal around this city, picking up clues to help you solve the mystery of who did it, where and with what. When you feel you've solved it, return to Velo to check and see if you won! Hurry, this event starts at 4 p.m.! 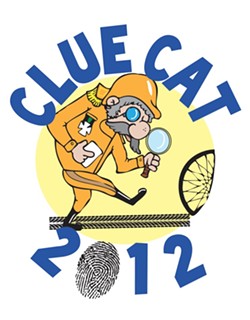 Moving on to Sunday, tomorrow will be the LAST People's Market of the year, held at the International Peace Gardens. This event will probably be the biggest, as it will feature the last of whatever local produce the community had, along with music and crafts. You'd do well to go check it out.

Kicking off on Monday will be the Salt Lake Design Week, starting off with the PechaKucha at the State Room. The event is only in its second year, but after the fantastic turnout from 2011, they worked extra hard to bring the event back and pack it with more activities. For me to try to go down the list would take way too long; just visit their website for full details of what's to come. If you're a designer or artist of any kind, you might want to attend.

Skipping down the line to Friday, Copper Palate Press will be hopping as they put on the sixth annual Punk Rock Halloween. If you're going to go see any band do covers, this would be the show, as each band playing will essentially be “in costume” as some other band. Problem Daughter will be playing as the Dead Kennedys, Jawwzz as Weezer, Shit Shamers as Cyndi Lauper, Handicapitalist as Gun Club and Super 78 as TV Personalities. This should be a badass show that you will kick yourself if you miss.

You may have noticed around town the Walkable Salt Lake signs that you were able to write on during Gallery Stroll. Well, the city wants your input on the alleyways of Downtown SLC, as well as to show you what some of them have to offer. Friday and Saturday, the city will be giving workshop tours of SLC's alleys to show you the hidden treasures many of them have to offer, as well as taking feedback on what might be done to help those areas. The next two workshops take place Friday and Saturday; go check it out.

Since I'm into next Saturday, I have a pair of events to discuss, the first being Pedalpalooza in Spanish Fork. I'm sure the minute I said that, there was a lot of confusion. This event is a must for anyone who uses a pedal when performing live on stage, as they've gathered experts to show you how to fix and create your own pedals. Plus, live music at the end. Even if you're not a pedal-wielding musician and are just a tech geek, this is an event worth checking out.

Meanwhile, in Ogden, the Junction City Roller Dolls will be holding their final event of the year with a double header. The Trainwrecks will be taking on the Foco Girls Gone Derby, followed by a Halloween-themed bout pitting the Slumber Party against the Psycho Killers. The whole bout will go to benefit Community Abuse Prevention Service Agency (CAPSA).

For those of you who can't make it to Ogden, next Sunday, you can experience derby back in SLC with Wasatch Roller Derby as their final bout and double header will take place live at the Derby Depot. Them Foco girls get around, as their Micro Bruisers take on the home-team favorites, The Bonneville Bone Crushers. The event kicks off at noon; be there!

On Sunday, Oct. 28, the Geek Show Podcast will return to Brewvies for its annual Halloween Costume Contest, as well as its monthly movie night in which it'll be showing another double feature for you to heckle. This month, it bring more recent films to the fray with the 2007's Trick 'R Treat and the 2011 remake Fright Night. At the moment, they're not sure when the costume contest will take place, either before the films or in the middle, due to The Walking Dead being shown, so come early and be prepared to win.

And then finally, Halloween! There is not enough time to list the over 20 major parties and events set to happen Wednesday night, so being the polarizing compass I am, I'm just going to point you to the biggest, and that would be The Pickle Factory. That's right, they're back, and kicking ass in the event department, which we'll discuss later on. But on Halloween, they'll look to blow the roof off with a costume part featuring Ruddy Carpel, Illwinded Powers, Phill Maggio, Flesh Of The Gods, Dumb Luck, Dine Krew, Dusk Raps and Grimblee providing the night's music. You must be here!

As for the blog: Over the next couple of weeks. I'll delve into Gallery Stroll, the aforementioned Shred Shed show, chat with a local fashion designer, explore the latest media studio, hit up the Pickle Factory and check out a brand-new podcast. At least, that's the plan; things have been rather “up in the air,” so to speak, this month. As always, we'll see what happens.