For years (long before this blog ever started), one of my very best friends has worked for a local art shop and gallery, so long that the staff know who I am and I can usually walk through the place to say hello. --- The shop wasn't always an art shop and had clearly seen other owners in other capacities, some of whom had left their own mark on the old building's interior. High above the floor, across one of the beams holding up the roof, there's a phrase that's been etched in marker and left alone by the creative minds who own it today. It says “1 year don't make no difference, but 5 you can tell.”

This Tuesday, on New Year's Day, this blog officially turns five years old. Which, if you count the amount of blogs that drop off the Internet in any given year over the course of those five years, that makes me the rusty signpost of artistic oddities, fantastic films and musical affairs, or at least the Doctor Who equivalent of an entertainment reporter. Either way, I'm officially old and starting to become a staple of some kind to this scene. Many in this awkwardly high online position would gloat to high hell that they've outlasted so many that have come before, which I'm slightly guilty of. But really, I just feel humbled. For some reason, you, the reader, keep on following this tome of local entertainment. Most blogs and columns like this one do, in fact, die out long before they reach this point, either from the inability to be consistent and interested in their own coverage or from frustration that they didn't immediately become famous themselves because of it and quit. And while I have enjoyed being called King Of The Underground a lot this year on Radio From Hell, the truth about this kind of gig is that you rarely become rich and famous. Unless you like what you do and like the people you cover, it's far too simple to just give up. Which is why I'm very grateful to have such a thriving scene to cover and have been so fortunate to make so many of those participating in it my friends. Five years, has indeed, made a difference, both on myself and the community. 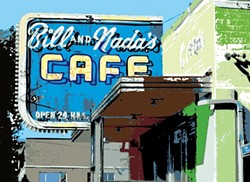 Over the past week, I've been thinking about the passing of David Fetzer, one of the brightest minds, gifted actors and kind-hearted men the theater, music and film communities have ever had. A couple of years ago, I thought about stopping this and changing it into something else until Fetzer summed up my blog in a very perfect analogy that made me smile. “It's like a diner at the crossroads. The menu is fine, but it's got the best view in a great location.” The point he was trying to make at the time was that even though not everyone in the city reads it, and maybe not every topic is to everyone's taste, it serves a better purpose staying as it is and helping out as many as it can, as opposed to changing every couple of years to suit the needs of those who couldn't care less. So, with that in mind, I thank you, the very readers who keep coming in to try the menu even if it isn't what you're expecting. Without you, this blog would have no purpose. As for the year to come, I'm excited to see what happens. (Bill and Nada's print from Stephanie Swift of PrettyLittlePixel.com)